They don't like animals (except gerbils), they hate the Village People and they wouldn't know an Armani from a Versace if it bit them in the butt. But one thing Dog Fashion Disco knows about is music.

Produced by Drew Mazurek (Gwar/Nothingface), their debut Spitfire release, Anarchists Of Good Taste , is an unabashed and decidedly bizarre excursion into the wild, weird and perverse world of rock and roll. These cats are truly disturbed.

Hailing from the Washington D.C. area, Dog Fashion Disco includes members, vocalist Todd Smith, guitarist, Greg Combs, bassist Steve Mears, Jeff Seigel on keyboards and drummer John Ensminger. Earning their stripes on the rock and roll battlefield, the band has performed in 22 states and 68 cities, opening for the likes of Stone Temple Pilots, POD, Anthrax, Clutch, Nothingface, and Methods of Mayhem. They also recently made a pivotal appearance on the national TV program, FarmClub. "We just got back from a tour and we'd enter cities where we'd never played," says Todd Smith. "I'd never been to Oklahoma but we showed up and there were kids there singing the words and telling us they saw us on FarmClub. They downloaded the songs and had told all their friends about us. It just snowballed."

Inspired by the likes of Mr. Bungle, System Of A Down, Tool and Clutch, Todd Smith reveals that Dog Fashion Disco likes "bands that stray from the norm and add a sense of the avant-garde. We feel we fit with those bands. It's not just drop D screaming for forty-five minutes.." Adds guitarist, Greg Combs. "Our simplest songs have at least seven or eight different changes to them. The key to our music is dynamics. Instead of having one song smash you in the face for three minutes, we've learned from listening to some of our favorite bands that you can bring a part down and get into a whole different vibe. It's just a matter of bringing everything down. So when you do go back to smacking them in the face there's a little more impact."

Quirky and aggressive, Anarchists Of Good Taste is a singularly twisted debut. Sporting such PC friendly song titles as "Leper Friend," "9 To 5 At The Morgue," "Pour Some Urine On Me," and "Cartoon Autopsy" (Walt Disney is turning over in his grave as we speak), Dog Fashion Disco's sound is best described as The Texas Chainsaw Massacre put to music.

Drawing from a well of unconventional lyrics, Dog Fashion Disco boldly dive headfirst into the heart of darkness--macabre themes such as death, impending doom and the forces of evil are earmarks of their lyrical vocabulary. "I've always had a fascination with death," asserts Todd Smith. "For one, I'm absolutely terrified at the thought of it. It's been kind of a phobia of mine. There's so many happy songs out there. One of the most important things that everybody has to get in touch with is what's gonna happen when your heart stops beating. A lot of people ask, "Why do you sing about death so much?" And I say, because it intrigues me. I sort through my ideas and feelings about it in songs and through my lyrics."

The leadoff track, "Leper Friend" nearly rips your head from your torso, its ferocious grip wrapping itself tightly around your neck. Todd Smith explains that "Leper Friend" metaphorically plays on somebody around you who is falling apart hence the "leper friend" part and there seems to be nothing you can do about it except stand back and watch it happen.

"Headless", the album's first single, decapitates the listener with a mighty swipe of the blade. "The song pretty much just wrote itself," admits Todd Smith. "It's just one streamless ride, there's really not any extreme changes in it. And that's what I like about it. It differs from our other material on the album."

Sounding like Charles Manson on a 0very bad day, another standout cut, "9 To 5 At The Morgue," charts the misery of the daily work grind, as Todd Smith explains. "That's about someone who feels like they're going through the same routines every day. Someone who almost feels like a mortician, who isn't very much more alive than the deceased, that they work with. I think the majority of people have been there and that song kind of popped into my head when you're just going through the motions of your day job. It seems like you're just staring at the clock from nine to five. It's just an endless struggle to get through the day."

The Doors meet the circus-like feel on "Vertigo Motel" is quite the surprise, its mid-song jazzy interlude shows off the band's formidable musical chops. "It's one of the songs we are absolutely enthralled with because there's many changes and many different feels and styles all wrapped into one," says Todd Smith. "When we play it live, I can see the looks on people's faces. They smile and look at their friend next to them. I think that's a good reaction. It makes me feel like we've actually surprised somebody."

Here's a band that doesn't understand the word "conformity" or "compromise". They spit in the face of commerciality. Dog Fashion Disco is the real deal, the welcome antithesis to the disposable sugar coated mall rock of Britney Spears and Christina Aguilera. 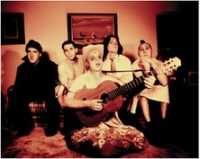