Desaster’s history is going back to the year 1988 when two young Metal- possessed maniacs wanted to follow the path of bands like VENOM, HELLHAMMER or DESTRUCTION (whose song „Total Desaster“ gave the band its name) – to play some fucking Black Metal without compromises was their aim. Early DESASTER did some (never released) rehearsal tapes and a still remembered live gig in ’89 which marked the official beginning of the band. Between 1990 – ’92 DESASTER had to manage serious line- up problems before Infernal, the only remaining member of the original line- up, found the right warriors to continue. Okkulto and Odin joined the pack back then in 1992.

Two demos followed: “The Fog of Avalon” in 1993 and “Lost in the Ages” in 1994. Especially the last mentioned tape got great response from all around the globe. The first release on MERCILESS RECORDS was a split- 7” with UNGOD in 1995, a single limited to 1000 copies which certainly is completely sold out by now.

In 1996 the debut album “A Touch of medieval Darkness” was released and contained once more the typical DESASTER- mixture of “old- school” Black/ Thrash/ Death/ Speed / Heavy Metal of the glorious 80’s. There’s no doubt about that also some “newer” bands like SAMAEL, DARK THRONE, IMMORTAL had a big influence on DESASTER’s music and there are, of course, the medieval sounding elements which have become another trademark of the DESASTER- sound.

On DESASTER’s following output, the “Stormbringer” mini- album in 1997, the new beast on the drums , Tormentor, can be heard for the first time. He completed the line- up which still has the aim to deliver asskickin’ songs to the world wide underground Metal scene.

The limited “Ride on for Revenge” picture- single in 1998 became again a jewel for every fan of the good old vinyl and is, of course, sold out by now. But one song of this 7” called “Burning Crosses” found it’s way on the “Thrashing Holocaust”- compilation CD released by American NECROPOLIS RECORDS in 1999.

“Hellfire’s Dominion”, the second album, was released in September 1998. A special killer on the album was the neckbreaking Speed Metal hymn “Metalized Blood” which included guest vocals of Wannes of PENTACLE, Lemmy of the old German Speed Metal kings VIOLENT FORCE and Toto of LIVING DEATH, one of the band’s

all time faves! During the recording sessions of the 2nd album DESASTER also recorded their contribution to a SODOM tribute CD called “Homage to the Gods”.

The band celebrated it’s 10th anniversary in late 1999 with the “Ten Years of total DESASTER” double- LP which includes a collection of rare and unreleased material together with some new stuff. This double- LP with gatefold cover and a huge booklet is again for vinyl- hunters only and will never be released on CD! MERCILESS REC. also re- released the debut “A Touch of medieval Darkness” on CD with a new artwork in late ’99.

Another split- EP, this time in the rare 10” format and with the Dutch metalfighters of PENTACLE, was released on the German underground label IRON PEGASUS in March 2000 after DESASTER had left their old label MERCILESS. The 3rd full- length album “Tyrants of the Netherworld” was then released in late October 2000 on DESASTER’s new label.

In Summer 2001 DESASTER contributed the song “Darkness and Evil” with Gezol himself on guest- vocals for a Brazilian SABBAT tribute- LP. After the band had played several festival- shows (e.g. Fuck The Commerce and Wacken Open Air vocalist Okkulto decided to leave the band, but was soon replaced by the new shouter Sataniac who used to be the main man in the German Black/ Thrash band DIVINE GENOCIDE. The “Souls of Infernity”- 7” (released in November 2001) is the farewell- release of the old singer Okkulto.

On the new album “Divine Blasphemies” DESASTER showed again what they mean when they speak of their “Traditional Black Metal”: Blasting Black Metal together with sharp thrashing guitar riffs and pounding drums without any “modern” trends. Sataniac’s brutal vocals fit perfectly to this deadly potion and together with the powerful production the 4th album will soon conquer the world of unholy Metal! In 2003 DESASTER will again show their live-qualities on several gigs, open airs and a small tour throughout Europe. So… BEWARE!!!! 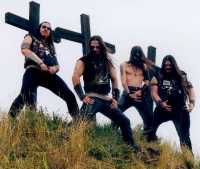