David Bisbal was born in Almería, Spain [1] Bisbal is the youngest of three children; his brother is called José María and his sister, María del Mar. Bisbal left school at an early age because of his interest in music. His parents made him work in a garden centre for a while however he began his musical career at the age of 18 as a singer when he was discovered by Orquesta Expresiones. In 2001, he was one of sixteen contestants on the television show Operación Triunfo, the Spanish Eurovision entry selection show. He came in second; the show was eventually won by Rosa López. It was due to his exposure on Operación Triunfo that he was spotted by Vale Music who offered him a solo recording deal. His first album, Corazón Latino, was released in the late summer of 2002. The album was recorded in Miami and produced by Kike Santander. It was an instant hit. Corazón Latino quickly became one of the most popular albums on the Spanish market. It beat the record for a debut album: 1 million copies sold in months. In the summer of 2002, he began to tour Spain with his new album. Whether solo or with Chenoa, (another contestant from Operación Triunfo and his "fiancé" for three years) he sold out all of his concerts. In 2002 he received an award for Album of the Year for Corazón Latino. At the Premios de la Música he was nominated for Best New Artist and at the Premios Amigo for Best New Artist and Best Album.

Bisbal's popularity soon spread beyond Spain. In 2003, he began to tour Latin America, performing over 80 concerts, all of which were sold out. He made it onto the cover of numerous magazines; he was interviewed on many television programmes including the Billboard Latin Music Awards and the Festival of Viña del Mar in Chile. In Miami, Bisbal received 8 gold discs for sales of Corazón Latino in the US and Latin America. He also received an award for Best New International Artist on the Premios TV and Novelas de México. His single "Lloraré las penas" topped the Billboard Latin Tropical/Salsa charts and was number three on the Billboard Hot Latin Tracks. In 2003, Bisbal received a Latin Grammy for Best New Artist and was nominated for Best Vocal Pop Album.

In 2004, David released his second album Bulería. This album was an instant hit and quickly rose to the top of the charts in Spain, Latin America and the U.S. Bulería is a homage to Bisbal's homeland, and includes a flamenco flavour alongside with his usual Latin style. More than one million copies of Bulería were sold in Spain and 300,000 in Latin America and the U.S.. Bisbal also released two other albums: Todo Por Ustedes (Live) and David Bisbal edición europeo.

On his latest album, Premonición, Bisbal collaborates with other artists such as Tomatito, Vicente Amigo, Wisin & Yandel, Dan Warner, Lee Levin, and Jon Falcone. This is Bisbal's most international album. Since the October release, Bisbal has received five platinum and one gold disc in the U.S. and Puerto Rico.

In 2008 he recorded a duet with Bajan singer Rihanna. The song, titled "Como Odio Amarte", is the Spanish version of Rihanna's hit single Hate That I Love You, which features Ne-Yo on the original version.

He is currently working on his 4th studio album. Bisbal has been recording in Miami, Florida, Los Angeles, California and Madrid, Spain since February 2008. The album is expected to be released on November 17, 2009. The first single will be relased in September. 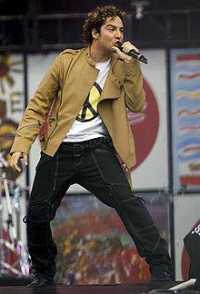