He began to play the clarinet at an early age, in a jazz band in Rome. The singer-songwriter Gino Paoli noticed Dalla's vocal qualities and suggested he attempt a solo career as an Italian soul singer. However, Dalla's debut at the Cantagiro festival in 1965 was unsuccessful probably due to his appearance and to his music, which was considered too experimental for the time. His first album, 1999, was released the following year. His next album, Terra di Gaibola (from the name of a suburb of Bologna), was released in 1970 and contained some early Dalla classics.

His first hit was "4 Marzo 1943", which garnered some success at the Sanremo Festival. Regardless of its title, the song became popularly known as "Gesu bambino". Also successful was "Piazza grande", which Dalla would sing again at Sanremo.

At this point, Dalla made a decisive move in his career, starting a collaboration with the Bolognese poet Roberto Roversi. Roversi wrote the lyrics to Dalla's next three albums Il giorno aveva cinque teste (The Day Had Five Heads) (1973), Anidride solforosa (1975) and Automobili (Automobiles) (1976) Although these albums did not sell in large numbers, they were noted by critics for the unusual mix of Roversi's weird lyrics with Dalla's improvisatory, and sometimes experimental, compositional abilities.

The duo had already broken up by the time the concept album Automobili was released. Roversi, who had been against the album's release, chose the pseudonym "Norisso" when it was time to register the songs. The album, however, included one of Dalla's most popular songs, "Nuvolari", named after the famous 1930s Italian racer.

Affected by the end of the collaboration, Dalla decided to write the lyrics of his next albums himself. This decision proved to be surprisingly good, and he soon emerged as one of the most intelligent and musically cultured of the Italian singer-songwriters. The first album of this new phase was Com'è profondo il mare (1977), in which Dalla was accompanied by some members of the future pop band Stadio. The title track or "Quale allegria" are today ranked among the best Italian songs.

Dalla's poetic inspiration was confirmed by the following albums, all entitled Lucio Dalla or Dalla and all best-sellers. They contain classics like "Anna e Marco", "L'anno che verrà", "Futura", and "Cara".

In 1979, his popularity was confirmed by the success of the Banana Republic tour and album of 1979 together with singer-songwriter Francesco De Gregori, his band, and his friend Ron.

He was invited for duetting on Pavarotti and friends, singing his own hit "Caruso" with Luciano Pavarotti. 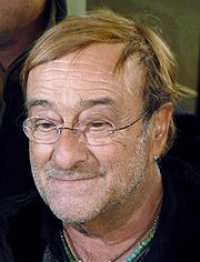