Official Biography...
The cradle is rocking, the dead are rising, the seas will boil and the skies will fall. As the world stands poised on the edge of mass destruction, the freaks, fools and monsters who rule us are about to be taught a real lesson in the use of power, for Cradle of Filth have created the greatest album of their career to date. 'Damnation and a Day', has been carved out of the darkness that is about to engulf what we know as civilisation.

The recordings, spawned from the loins of five of the most controversial Lords of darkness ever to walk the earth grew to their full strength at Parkgate, a studio set in the blood-soaked town of Battle, set in darkest Hastings. Inspired by their surroundings, the five Horsemen of the Apocalypse fed on the blood of Doug Cook who was unwittingly drafted in to co-produce and engineer the album. Little did he know that he was merely a victim.

Cradle sucked the knowledge out of their hapless victim and used his withered shell of a body to help direct them in their quest to create the darkest album they could possibly imagine, before disposing of his corpse in a ritualistic shooting. The bullet still lays lodged in his face. The corpse of course has never been found.

But the blood letting did not stop there. Daniel Presley, was hung, drawn and quavered after scoring the final pages of music for the live orchestra.

The death toll now standing at 10 (that's including the rest of the staff at Parkgate, who died slowly over the five months of recording), Cradle still weren't satiated, so a week spent in Budapest saw the death toll rise to 82 as they massacred the 40 piece orchestra and the 32 piece choir.

Hungary has once again fallen under the shadow of evil. Elzabeth Bathory will pale into comparison when this news gets out.

'Damnation and a Day' was scripted by the prince of darkness Dani Filth, whose quest to decipher the truth behind the Bible, brought him to summon forth Lucifer during a ritualistic killing. The once expelled angel willingly gave his side of the story from beginning to what will be the inevitable end for us. You will bear witness to his tale, during the 17 tracks of the concept album 'Damnation and a Day' which lies before you. Your death is nigh, so listen carefully and then offer your soul to the Filth and you might be saved, deny them and your destruction will come in many forms.

They will choose it, they will watch it and they will undoubtedly laugh in your tortured face.

The sonic soundscape that encapsulates the satanic readings were finely crafted from the cries that resonate from the depths of Hades by lords Dani, Paul, Martin, Adrian and Dave. The final stage was the mix. The two disciples known as Rob Caggiano and Steve Regina were called upon to aid the dark lords in their quest, along with the reanimated tortured soul of Doug Cook.

Once you have listened to what is to come, you will bow your heads to one of the finest albums to rise from the cradle.

Sony have now embraced the darkness and under the influence of evil have become slaves to the dark powers that have been engulfing them for over a year, all have committed their souls to spreading the message and will by the March 10th 2003 release unto us the future.

So go forth and cut out the tongues of the unbelievers, lay waste to the trash that assaults our ears every day, for that is merely a smoke screen to numb your minds from the truth, and beg forgiveness for your past sins. For if you don't, you're fucked.

World domination takes apart society as we know it in mid March when the Cradle swings into action and takes to the road to hell, first into Europe and then back to the US to follow up last year's sell out tour. So all the petty little people out there with their bombs and their guns better run away now, because it's show time and they haven't got a hope in hell, even if they do have an access all areas pass.

Cradle of filth have finally arrived at the palace of righteousness, ready to drain the blood from your face and whatever is left of your miserable pathetic carcass. 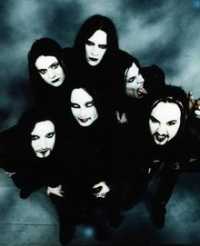