As in most endeavors, there are those who met the standards and those who set the standards. For three decades, Conway Twitty enjoyed unequalled staying power in an industry whose shooting stars often descend as quickly as they rise.

In the whole world of American popular music only Conway Twitty has had 55 number one records. The Beatles didn't do it. Elvis didn't do it. Frank Sinatra didn't do it. Conway's 55th hit "Crazy in Love" went to number one on the charts as recently as December 1990. During the first fifteen years of R&R's (Radio and Records) country chart histories, this legendary vocalist reigned unchallenged as Top Artist based upon points tallied for the most #1's, most Top 5 and most Top 10 hits during that time frame. (And they missed at least five of his best years when he was having hits like "Hello Darlin'," "Linda On My Mind," and "You've Never Been This Far Before." )

According to R&R, "A steady regime of three or four big hits a year (plus a duet or two) adds up to formidable point totals. Conway Twitty, who won the country crown for the R&R era, accumulated more than twice as many points from his legion of year-end hits than the leader of any other format. Similarly, the artist totals for most #1's, Top 5 and Top 15 hits outstrip those for any other format finalist."

When asked how he did it, Conway would quickly explain that he records songs with the message directed to women. He said they "get the message quicker than men do." However, these messages are also for the man who has something he'd like to say to a woman, but has trouble saying it. "All he has to do is drop a quarter in the juke box, press the right buttons and squeeze her at the appropriate time and she'll understand," Conway explained.

Throughout his long career, he has touched virtually every popular musical category of the nation: rockabilly, blues, rock'n'roll, Dixieland, R&B, gospel and mainstream country.

Twitty was a child of the Mississippi River. His father, a riverboat pilot, taught him his first chords on a small guitar when Conway was only four years old. The family lived in the tiny river town of Friars Point, Mississippi, a largly black settlement of cotton patches and tenant farms. Next door lived an old black man Twitty fondly called "Uncle Fred." Twitty idolized him and learned music at his knees.

That was just the start of Twitty's interest in music. He spent many hours out on the ditch bank, next to a black church, listening to the sound of gospel music coming from inside and of course, the Grand Ole Opry every Saturday night on the radio.

By the age of 12, his family had moved up the river to Helena, Arkansas. He had put together his first band, "The Phillips County Ramblers" and had his own radio show every Saturday morning on radio station KFFA in Helena.

It was in Helena Twitty discovered his second love, baseball. It soon became the center of his life, and he decided he wanted to play professional more than anything else on earth. After graduating from high school, he was offered a contract to play with the Philadelphia Phillies, but before he could sign, he was drafted by the Army.

Although he had a band while he was in the Army, Twitty never thought of it as a profession. About his professional singing career he says, "I never had a dream, I simply lived it."

After his discharge from the Army, he heard an Elvis Presley record, "Mystery Train." It's completely new sound really knocked him out, "although I loved country music, I didn't think I was good enough to compete with my idols," Twitty explained. "I did think I could sing Elvis' style of music. I had to make a decision so I threw down the baseball bat, picked up the guitar and I've never looked back!"

Ironically, Conway Twitty didn't break through with rockabilly music the way the others (Carl Perkins, Jerry Lee Lewis, Elvis and Johnny Cash) did. He scored his first #1 hit with the powerful teen ballad, "It's Only Make Believe" on MGM in 1958. It was the first of dozens of emotion-packed Conway Twitty compositions that have hit the top of the charts.

Eight years and three gold records later, Twitty decided to make a change. Despite his wide success as a rock'n'roll star, Twitty was writing country songs as early as 1960. But he had no oulet for them. "Finally" he said, "I thought I'd lived long enough and experienced enough things to compete with my heroes and do justice to a country song."

A good friend of Twitty's, Harlan Howard, took him to meet Owen Bradley at Decca Records. Bradley took a chance on Twitty and signed him as a country act to Decca/MCA. This disillusioned rocker had scored four straight country #1's by the dawn of the 1970's. By 1980, he had become the most consistent hit-maker in the history of country music. Although he had written many (17) of his best known hits, including "Hello Darlin'," "Linda On My Mind," and "You've Never Been This Far Before," it's his ability to hear the great songs, written by others that has kept him on top, Conway believed. He credits much of his success to choosing the right song. "I know right now that 99% of my next record depends on how strong that song is, not what I do to it. I really believe that." That helps explain why Conway would spend months listening to 2000-plus songs before he would go into the studio to record an album.

Twitty was very protective of his career and he attributed part of his longevity in the business by avoiding over-exposure. Over the years he shied away from interviews and doing too much television. He always preferred to let his image live through his music. However on the eve of his 25th anniversary in country music, Conway decided to change this with appearances on the award-winning "Larry King Radio Show," "Late Night with David Letterman," "The Pat Sajak Show", and of course, "Nashville Now".

In 1989 the A.M.O.A (Amusement and Music Operators of America) celebrated the 100th birthday of jukeboxes. In honor of this, they decided to start a "Jukebox Award." The first year at their annual convention (September, 1989), Conway was honored with this award in recognition of his lifetime contribution to the success of the jukebox industry.

In June 1989, Twitty celebrated the seventh anniversary of "Twitty City," a nine-acre tourist complex in Hendersonville, Tennessee, just outside of Nashville. Twitty developed the complex with the country music fan in mind. In one place, fans can find everything they want to see when they come to Nashville. What really made the attraction unique was Conway's home and the homes of his four children were on the grounds. He spent as much time as possible visiting with the fans, the people who, Twitty said, "have made all of this possible for me."

Besides being a major music figure, Conway Twitty was known as one of the most honest, forthright men in Nashville who put decency and dignity above all else. Conway was a gentleman who defined class. He is truly missed. 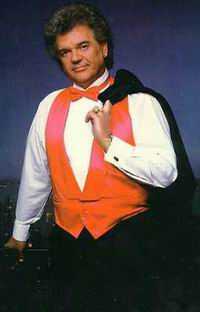