Rhys Fulber, the man behind CONJURE ONE, has an impeccable track record. Initially part of Front Line Assembly and later, Delerium, the versatile Canadian-born artist and studio aficionado has been trailblazing from the beginning of his music career.

Defining the genre for the industrial scene in the late 1980's with the seminal group Front Line Assembly from 1987 to 1996, Fulber had the foresight to change direction towards ambient dance, creating Delerium (with Front Line Assembly collaborator, Bill Leeb) just before the industrial movement had run its course. Delerium's 1997 album, Karma, boasted the track "Silence," featuring the vocal talents of Grammy Award-winning, multi-platinum selling Sarah MacLachlan. A global smash, "Silence" rocketed to number three in the U.K. charts, number one in Ireland, number four in Belgium and hit the top five in the Australian charts. Karma went on to sell a quarter of a million copies in the United States alone and over a million copies worldwide.

Since that time Fulber has become an in-demand producer and remixer with credits that include P.O.D., Sarah Brightman, Mudvayne, Fear Factory, and most recently, critical and commercial favorite, Josh Groban, among others. Fulber continues his pioneering tradition with his latest project, CONJURE ONE, his first as a solo artist.

Following the rapturous blend of lush textures, hauntingly beautiful melodies and softly curved electrobeats of Karma, Fulber manipulates the self-titled CONJURE ONE album as a filmmaker would, using varying shades of light and dark to create mood music rich with images.

"It's ambient, epic music with a pop structure," says Fulber of CONJURE ONE. "The goal was to make cool, world-influenced songs without the constraints of a specific genre. As an artist, you're always grateful for the support of your core fans, but at the same time you want to stretch and reach a broader audience. To create something that everyone can get into is music in its purest form."

Tracing Fulber's musical roots to his early childhood in Vancouver, Canada, it was his family's influence that had the biggest effect on his career. "My dad was a musician, so we always had instruments around the house," he says. "When I was five or six, I started playing drums. By age 11, I was already hanging around studios, going to shows and buying Dead Kennedys records. Music became really important to me. It became a lifestyle and a means to an end. Then I heard Pete Shelley's solo album, Homosapien, and that changed the way I looked at music. I began to realize the electronic aspect was way cooler because you could do everything yourself. My father bought me a synthesizer and drum machine when I was 14 and things took off from there. Within a few years, I was making records with Front Line Assembly and touring Europe. Looking back, I think I always knew I'd be making music one day, I just didn't know in what capacity. I never dreamed I'd wind up where I am now."

The making of CONJURE ONE was an international affair. Written and recorded in Amsterdam, Holland, Vancouver, Canada, London England and Los Angeles, California, it draws its principal inspiration from Mediterranean and Middle Eastern music. Using samples from CDs bought in Turkey and Cyprus from world shops specializing in unique sounds, for Fulber it was all about creating a vibe.

"I handed the songs over to the singers and let them do whatever they wanted," says Fulber of the vocal collaborations. "Most of the final versions are their original visions." The vocalists each take turns breathing emotional life into Fulber's exquisitely crafted compositions with warm, seductive and absolutely mesmerizing performances. Tracks like "Tears From The Moon," "Center of the Sun," and "Manic Star" are intoxicating and exotic, their honeyed melodies pouring over a throbbing pastoral pulse while "Pandora" is a swirling exploration of Middle Eastern melodies and atmospheric dance grooves inspired by an Albanian folk lament. "She was in Ireland, I was in Los Angeles," Fulber says of his collaboration with Sinead O'Connor. "We did it over Ednet, and at $15 a minute, there wasn't a lot of time for small talk. She just sang and sang and sang. It was very efficient. It only took about three hours. We whizzed through it."

"I wrote the melodies and lyrics after just three listens," says Poe, who appears on the aforementioned "Center of the Sun" and "Make A Wish." "Rhys' music inspires that sort of creativity. His songs are beautiful and have that rare timeless feeling." Additional collaborators on the record are songwriter Billy Steinberg (co-writer of Madonna's "Like A Virgin" Cyndi Lauper's "True Colors" and the Bangles' "Eternal Flame"), Tom Holkenborg (progressive house maestro behind Junkie XL), Rick Nowels (Madonna, Dido), London-based composer Chris Elliott, who worked on the string arrangements, and the Vancouver Symphony Orchestra.

Says Fulber, "Everyone involved played an integral part in the making of the record. It's exactly the kind of album I wanted to hear and I don't think there's a lot of music out there that sounds like this. I must admit, I did feel a certain amount of pressure at times. You get to a point where you don't know if what you're doing is good. But I got great feedback and support. When I listen back to the record now, I'm really pleased. I feel I've said something with it." 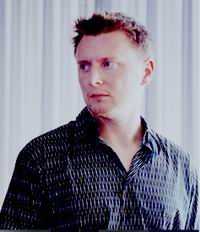