"We were supposed to be the one-hit wonder of ’94 and then the two-hit wonder of ’95, but we never paid any attention to that stuff," says Collective Soul mainman Ed Roland. "We always knew what we could do as a band."

With eight #1 rock hits to their credit and worldwide sales in excess of 7 million, Collective Soul stands as one of the definitive groups of the ‘90s. Now, with the stunning "BLENDER," the Atlanta-based band is poised to begin the musical domination of a new century. The eleven-track album sees Collective Soul broadening their already-expansive pop palette with contemporary textures and rhythms, notably on such tracks as the driving first single, "Why Pt. 2," or "Perfect Day," a strikingly soulful duet between Roland and the one-and-only Elton John. "Front-loaded with penetrating, powerhouse riff rockers," Rolling Stone’s Parke Puterbaugh raved in his three-starred review, "‘BLENDER’ simply shreds with unapologetic classic-rock energy."

"We’re a guitar band," Roland says proudly. "That’ll always be the cornerstone of what Collective Soul does. And you can expand from that."

Produced by Roland and Anthony J. Resta, and mixed by Jack Joseph Puig (the Black Crowes, the Verve Pipe, Semisonic, Aimee Mann), Chris Lord-Alge (the Replacements, Hole, Rob Zombie, New Radicals), and Bob St. John (Duran Duran, Extreme), "BLENDER" was recorded on hometown turf at Crossover Studios in Atlanta. For their fifth longplayer, the five members of Collective Soul opted to take a very laid-back approach, gathering daily in their regular rehearsal space to write and record. The idea was to create an atmosphere of spontaneity in order to bring a sense of immediacy to the final product. Also, the band figured, if we have a good time, everybody listening will too!

"We had an absolute blast making this one," says Ed. "It was the most enjoyable one to make, mostly because everyone was in a good mindspace, there was no real drama going on in anyone’s life. Where we were recording was just a big room, so it kind of had an open vibe. We set up couches, people would come in and watch us – some of them, I don’t think they knew who we were. It was a real loose vibe, which was good, because with the last record, we spent a lot of time in the studio making sure everything was performed perfectly and arranged perfectly. This time we wanted to have a little more fun. We wanted to enjoy the process."

The open door policy led to cameo appearances from assorted family and friends, including some of Atlanta’s leading musicians, such as singer/songwriter Shawn Mullins, and Butch Walker and Jayce Fincher of the alt-pop combo Marvelous 3. In addition, the band’s hometown spirit saw them choosing the album’s title from more than 12,000 entries in the "Collective Soul-ection" contest sponsored by the local alternative station, WNNX (99X).

"We wanted to bring the community into the fold," Roland says. "We wanted to have Atlanta and Atlanta’s artists involved. It was the first time we felt comfortable, as a band, opening the door to Collective Soul’s world."

They might have taken a new path to get there, but the end result is classic Collective Soul. "BLENDER" is watermarked with the band’s patented three-guitar riffery, that irresistible head-on collision between pulverizing power-hooks, and Roland’s ever-memorable melodies. Among the hard-edged highlights are the pure-pop pyrotechnics of "Boast," the volatile album closer, "Happiness" (dig the screaming climax!), and the aforementioned "Why Pt. 2," the title of which begs the question – why "Pt. 2"?

Well, it turns out that Ed and Ross had written a song entitled "Why" back in the days when they were cutting the demos, which would later be collected on the band’s 1994 debut, "HINTS ALLEGATIONS AND THINGS LEFT UNSAID." Though its only public appearance was on the B-side of an early international single release, Roland didn’t want his new song to be confused with its ancestral namesake.

"When I wrote this song, I was stuck on the word ‘why,’" he says. "I thought I’d change it, but I never could get it out of my head. I thought, not that many people heard the first one, they’re not related other than having the word ‘why’ in there, I’ll just be cute and clever and call it ‘Why Pt. 2.’"

Shimmering pop tunes like "10 Years Later" and "After All" owe a debt to New Wave icons like the Cars, even as they incorporate a distinctly modern energy. The "BLENDER" kick-off track, "Skin," gleefully rocks down Electric Avenue, while the turbo-stomper, "Vent," is fired by both cutting-edge beats and a heretofore unheard bellicosity from the frontman.

"Everybody’s a prick at some point," Ed says of the song’s confrontational hook, adding with a grin, "including myself. No, the song isn’t directed at anybody, I just think everybody has bad days, and you experience those days with other people. All these songs were written really quickly, so if something happened to me that day, that was going to be the lyric. When we were doing ‘Vent,’ Shawn Mullins was in the rehearsal space next door and he heard the groove and he said, ‘Hey, there’s this part in the breakdown, let me do something.’ And Jerald Jackson from Funkadelic, he was in another rehearsal space and he was like, ‘Man, I want to play clavinet on there!’ That song really represents how we did the recording; people would just stick their head in and go, ‘Hey, can I play?’"

Roland credits much of the album’s progressive mood and freewheeling sonic approach to co-producer Resta – known for his collaboration with Duran Duran, as well as his previous pairing with Collective Soul on 1998’s "DOSAGE" – who also contributed inventive programming and turntable work. "Anthony brought in an unbelievable spirit and attitude," Ed says. "He has more gadgets than we do, so we all had a good time just plugging stuff in and seeing what sounds would work. "We’ve learned a lot from our time in the studio," he adds, "so we know little tricks we can do. We’re not afraid of turning knobs here and there. That comes with growing as a band. I’d hate to be making the second record every time. We try to keep moving."

From Collective Soul’s very beginning, Roland has often credited "ELTON JOHN’S GREATEST HITS" as his introduction to the wonderful world of rock n’ roll, as well as his inspiration for becoming a songwriter. Sir Elton has since become a part-time resident of Atlanta, as well as a full-time friend of the band. "I heard from the grapevine that he’d really liked our first CD, so I tried to get in touch with his camp," Ed says, recalling his first encounter with his hero. "I wanted to say thank you for making me want to be a songwriter, y’know, pay homage. About 30 minutes later, Elton called me back. Which was a little overwhelming, it took a little while to get over that. He’s not intimidating at all, he makes you feel so comfortable, but he’s still Elton John. There’s no getting around that! "So we’d gotten to know him over the last five years," he continues, "and we were all at dinner one night, we’d gotten to a comfortable level, and we said, ‘Elton, would you mind singing on a song wit
h us?’ And he said, ‘I’d love to, as long you let me play the piano.’ It was like, well, that’s the easiest deal we’ve ever made!"

They decided on "Perfect Day," which with its warm pop vibe and slinky soul groove, was clearly well suited for both the band and their special guest. The only problem was, Ed hadn’t entirely finished writing the lyrics! He worked long into the night before Elton’s scheduled studio time, just managing to finish before sunrise. The next day the superstar arrived at the studio and amazed Collective Soul with his enthusiasm, professionalism, and sheer talent. "He came in, listened to the song once, played the piano in two takes then got up and sang it in two takes," Roland says, still impressed.

"Then we sat around and cut up all day. Like I said, we’ve gotten comfortable with him, but at the same time we were just like, ‘My God. It’s Elton John singing one of our songs!’ It’s a honor to know him, not just because of his music, because he’s such a good guy. He’s been so supportive of the band. He knows more about music than anybody I’ve ever met – he has more CDs than God! You see that excitement and that energy, and it’s very inspiring to the whole band."

While Roland has been outspoken regarding the impact of Seventies FM radio on Collective Soul, "BLENDER" features a surprising cover of "You Speak My Language," a song originally performed by the Boston-based low-rock trio, Morphine. The punk-powered track came about after a late-night studio discussion mourning the recent passing of the band’s frontman, Mark Sandman. "It’s something that I don’t think people would expect from Collective Soul," Ed says. "And what a great thing, if one Collective Soul fan listens to this and goes out and gets a Morphine record? If one person becomes a fan of Morphine because of us, that’s really cool. When we did the song – Morphine being a two-string bass and a baritone sax and drums, very sparse in the arrangements – we come at it in a very different way, and I think it shows what a great songwriter Mark Sandman was."

In addition to featuring Collective Soul’s first-ever cover version, "BLENDER" is adorned with the first-ever cover appearance by the band, with a set of portraits from renowned fashion photographer/video director David La Chappelle. "People have always said that we’re a quote-unquote ‘faceless band,’" Roland grins, "so we thought we’d be a little cute about it this time. We put our faces on the cover, so now we’re a body-less band. Over the next five CDs, we’ll gradually put the rest of us on there, so by our tenth CD, everybody’ll know what the band looks like. We’re just being smartasses, basically."

"The new breed of rock bands, a la Creed and Vertical Horizon, owe a big tip of the guitar pick to Collective Soul, which has been among the most consistent rock bands since the middle of the last decade," Billboard recently declared, noting that "This band has yet to miss the mark."

Collective Soul exploded out of their hometown of Stockbridge, Georgia onto the national consciousness with 1994’s RIAA double-platinum "HINTS ALLEGATIONS AND THINGS LEFT UNSAID." The album – a collection of the band’s early demos, no less – was highlighted by the classic, RIAA gold-certified, #1 rock smash, "Shine." The group’s self-titled second album arrived the following year, and more than lived up to the promise of the debut, scoring RIAA triple platinum and logging a 76-week run on the Billboard 200. "COLLECTIVE SOUL" featured a remarkable quartet of singles – "Gel," "December," "Where The River Flows," and "The World I Know" – all of which rose to the #1 spot on the nation’s rock chart.

Released in 1997, "DISCIPLINED BREAKDOWN" hit RIAA gold while Collective Soul’s chart-topping streak continued: Both "Precious Declaration" and "Listen" went on to hit #1 on the rock charts. The band’s fourth album, 1998’s platinum-certified "DOSAGE," saw Collective Soul furthering its run as rock radio superstars, as the "Heavy" single set a new high mark for weeks-at-#1 with a 14-week chart-topping reign. "I like being an old band," Ed Roland laughs. "Five CDs in six years, that’s something to be proud of. We like the fact that we’re ‘catalogue.’ We want to be one of those bands that gets two racks in the record store. We’re got enough for one, and now we’re ready to start working on our second rack." 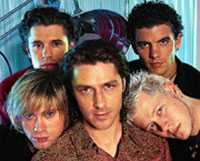