Just months after Coldplay released their #1 debut album, Parachutes, in England, they were hailed as Band of the Year 2000 in the music press. How did these four college friends become the poster children for a nation's emotions? It may have happened at the speed of light, but it wasn't as easy as it seems.

Coldplay secured a permanent position in Britain's music elite by writing beautiful, simple songs that gently pulled at the heartstrings of a nation. Somewhere in between the confident, vulnerable guitar playing of Jonny Buckland, the melodic bassline of Guy Berryman, thoughtful drumming of Will Champion, and lead Chris Martin's stark, tenor vocals are answers for the soul. Although melancholy stands behind every Coldplay song, each one is also steeped in an unusual and sincere optimism rarely found in English bands. Songs face an inevitable sadness and yearning - a little thing called being real - to get to a better place where the truth held firm in pure emotion is pivotal. Songs like the remorseful "Trouble," with its memorable piano-line, the lonely "Spies" and mega-hit single "Yellow" reveal a hybrid of lyrics that can only be described as joy and remorse, all wrapped into one. "We just want the songs to reflect reality," says Chris.

In doing so, Coldplay may well be the most profound British act to emerge out of the millennium thus far. No one is more surprised by their popularity than the band. Who knew such an austere and tactile musical existence would lead to such greatness? Yet it has.

It all began when the members of Coldplay met in 1996 - their first week of college (University College London). Two and a half years later, they had their first official band session - a rehearsal in Jonny's bedroom in January of 1998. Jonny and Chris had been working on songs since they met, but the other two members hadn't really been around much until Guy joined the band to play bass just before dropping out of engineering school. The other two stuck with their studies, while also pursuing music.

Will, also still in school, loved playing guitar but was persuaded to become Coldplay's drummer so the band could play their first gig (at a Cuban Caf?at a festival for unsigned bands called "In The City" in Manchester) in late 1998. They had just six songs written including "Don't Panic" and "High Speed" - now found on Parachutes. They soon released 500 copies of an EP called Safety (financed by their now manager, Phil) and released the single "Brothers And Sisters" on a small English label called Fierce Panda, after which the UK label Parlophone signed them in 1999 just before final exam time. As they say, the rest is history, or in the stars, or whatever. In any case, another EP on Parlophone, The Blue Room, followed, as did the single "Shiver."

Before the band, lead singer/guitarist/pianist Chris Martin grew up in a close family from Devon, England. In fact, he still lives at home as the eldest of five kids raised by a teacher mum and accountant dad, where he started bashing out tunes on the family piano at an early age. Typical of the first-born, he is an over-achiever and self-proclaimed worrier. Although anything to do with "injustice" will rile him up, no one can accuse him of being the typical tortured and drunken English musician since he rarely drinks, never smokes and admits life can be pretty damn good. He's a shy product of boarding school where he soon graduated to the guitar and has been in bands since the age of 15. He considers the big three in music to be: Bob Dylan, Neil Young and Tom Waits. Oh, and the Flaming Lips aren't bad either.

Lead guitarist Jonny Buckland doesn't think he's a very good guitar player, but the rest of the world begs to differ. He was born 22 odd years ago in London, then his family relocated to Mold, North Wales when he was just four. Jonny first picked up a guitar at the tender age of 11, encouraged by his older brother who was a huge My Bloody Valentine fan. Both boys grew up in a house filled with Eric Clapton and Jimi Hendrix from their dad's record collection. Yet it wasn't until Jonny discovered The Stone Roses that he started taking the guitar seriously. People describe him as shy and nonchalant, but he argues he's just happy to be quiet.

Bassist Guy Berryman was born in Scotland, although his family later moved to Kent, England where he started to collect rare groove and funk records when all the other kids were into indie rock. He started playing bass at age 13 and is still inspired by a love of those early records.
Words like "calm," "reliable" and "enthusiastic" are used to describe drummer Will Champion. He was born in Southampton, England to teacher parents who encouraged him to spend his formative years learning to play a variety of instruments including guitar, bass, piano and the tin whistle. He had never played drums before joining Coldplay but was so musically inclined that he quickly caught on. "He's very quiet and very wise," says Chris about Will. "As a musician, he's got the most amazing sense of melody. He can play just about anything ... and he can do little impressions. He's good at entertaining people."

When the band went into the studio early last year with co-producer and engineer Ken Nelson to record Parachutes, they agreed that nothing would go on the album that they all four didn't agreed on. This led to a fierce and gut wrenching recording session that the guys thought might be their last. Songs ended up veering from fragile to forceful, from understated to epic, all-the-while carried by Chris' gorgeous vocal range and endearingly bashful lyrics. On a bittersweet morning in May, the album was finished.

No one predicted that just a short time later, Parachutes would debut at #1 and continue to hover in the Top Ten Charts for the remainder of the year. The band was also nominated for an esteemed Mercury Music Prize, received the Q Award for Best Album, signed to an American label (Nettwerk America/Capitol) and were exhausted by year's end from endless promotional duties and touring. Having been tirelessly in the spotlight for months now, the members of Coldplay are reticent to talk about themselves - subscribing to the school of thought that "those who say less tend to be wiser." Yet what they have to say can be heard in the music, which speaks louder than any words spoken ever will.

Chris admits that the last track on the album, "Everything's Not Lost," is the message of Coldplay's entire work up until now. The song says that when things happen to you in life, your first inclination is to think everything's terrible, what's the point? Then you realize the point is simply that - that it's not that bad and you have to keep going. Finally, you come to realize that life is good. Look for Coldplay to embark on their first-ever American tour in the beginning of 2001. 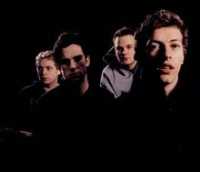