NO ONE could have predicted the chaos and upheaval the members of Cold have faced over the past two years. Following the triumph of "13 Ways To Bleed On Stage" (2000) and 2003's "Year Of The Spider" (which spawned two hit singles, "Suffocate" and "Stupid Girl"), the outlook was sunny. Both albums went Gold. They had numerous appearances on television and toured extensively with bands like Marilyn Manson, Godsmack and 3 Doors Down. In the brilliant light of their success Cold could not see the dark clouds looming on the horizon.

Differences with executives at Geffen led to tensions within the band, and Cold was soon seeking a new record label. Singer Scooter Ward was battling a flurry of personal troubles and demons. Halfway through a sold-out tour opening for Evanescence, Cold guitarist Terry Balsalmo filled in for a departed Ben Moody, who abruptly left his band. When the tour was completed, the future of Cold was up in the air and Balsalmo jumped ship. The gathering storm had become a full-blown tempest.

When the band retuned home to Jacksonville, Florida, Ward learned his younger sister was ailing. After a short stay in rehab and resolving to stay clean, Ward discovered that his sister had cancer. In the midst of so much despair, Ward returned to his music. And with the help of drummer Sam McCandless, the singer began to write the songs that would make up "A Different Kind Of Pain."

As Ward puts it, "The process for making this record wasn't just about dealing with the darkness, the dark side; it was a healing process. This changed my life. It changed our lives. Everyone who was involved and everybody who was around us at the time was changed by this record."

"We went into our rehearsal space in Jacksonville but we weren't comfortable writing there. At the time, my little sister, Jen, had been diagnosed with cancer. She was going through a really bad time and everyone was telling her to get her stuff in order. So we moved our band equipment into my parents' house and wrote the record in Jen's room, where she grew up. As soon as we got in that room we were so productive, we were coming up with two or three songs a day."

Determined to confront their fears, McCandless saw an outlet for their pain. "It was totally a different writing style for us, compared to all our records. It was easy to focus. And the whole record is about that. No matter how bad in life everything gets, it's about overcoming. We came from the darkest depths into the light and for us this is the most powerful record we've ever done."

"We really connect with our fans," Ward says. "One fan reached out to me online and told me her mom was an alcoholic, tearing it up every night at bars. Her father had beaten her so badly that she went to the hospital with broken ribs and she's only fourteen years old. She was writing that she wanted to get away, so I wrote back and asked her if she wanted me to call the police or Child And Family Services. She wrote me that there was nothing I could do; her mom would deny everything. I told her I would write a song for her and I did my best to put myself in her space, to feel what she went through and I ended up writing 'Tell Me Why.' I'm able to relate to stuff like that because of things that I've gone through or am going through. And I know there's a way to push through and that it's not that drastic, there's always a way out. She knows I wrote this song and she hasn't heard it yet but when she does, I hope that it helps."

"A Different Kind Of Pain" was recorded at Bearsville Studios in upstate New York and produced by Michael "Elvis" Baskette (Chevelle, Iggy Pop and Puddle of Mudd). "Michael really understood where we were coming from," smiles Ward. "He knows how to get a really great guitar sounds, and we already knew him so it was very comfortable. We'd been writing for six months and we recorded the record in about three months." "It was near or around this time that we got picked up by Lava," adds McCandless. "Going from one label to another wasn't a big deal exactly; we had confidence. We've always sold a decent amount of records and knew that we had a strong fan base. I didn't really care if we were going to end up with another major or go to an indie: as long as we did it our way."

Baskette's ability to achieve great guitar sounds is a wall of power for Ward to wail against. Evident on "Happens All The Time," open, ringing notes give way to power chords as the singer pleads, "I can't hold on/This happens all the time/I still find my way to you". Ward later stretches his voice and reveals the true sound of longing on the song "Tell Me Why" as the crescendo of guitars rains down. In addition, the slow, driving chorus on songs like "Ocean," and "A Different Kind Of Pain" belies the strife within the lyrics; and Baskette has handled it deftly.

Scooter Ward's eyes light up as he shares the climax of their tale. "Around the time we were finishing up, we learned that Jen had gone into remission. It was really cool. It seemed that, with everything going on, we needed to write this record in her room. We needed to push through all that, and when we did, things started getting better for everyone. It was really strange; after all we've been through, it was like we were being guarded the whole time. I've never been religious or anything like that…ghosts, angels etc but there was something happening for us. We're a four-piece now, and we have a new label and record that we're really proud of. I've never felt so good about being in this band as right now. This record and everything we did with it felt like we were guided. I felt focused. This record is marked by transition and upheaval and literally from lyrics to graphics about making it through the storm. And I'm more proud of this record, more than any other record we've done."

"For Cold, music is…" Scooter pauses. "It's real. It's medicine. It's therapy. And I think anybody, no matter what age you are, can be affected by it." 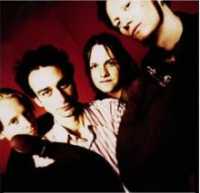