A brief history of cog to date

Organic in the sense that cog play their instruments, some people would say cog's music resembles some sort of progressive rock that flows effortlessly from thick slabs of distorted guitars, twisting rhythms through to vast playgrounds of ambient organospace and back again. Not shy to incorporate sequencing and sampling to propagate more ideas in a live and recording environment, cog feels this has opened the possibilities for more musical exploration.

Although cog's internal ideological foundations are still in a relatively embryonic state, it feels as though some sort of catalyzation has been occurring. It involves notions of dissent and insurrection, anti-authoritarianism and revolution, egalitarianism, social rationalism, freedom and truth, environmentalism, progressive anarcho-syndicalism and radical democracy, balance and equilibrium, cooperation and reconciliation.

These are ideas that have fascinated and intrigued the members of cog throughout the bands history. Topics of this nature constantly re-emerge in conversation and dialectical discussions. It's beginning to appear as though there is some sort of symbiotic relationship developing between the conscious decision to devote cog's life to music and the need to express and participate in some sort of social commentary.

1998 - Flynn and Lucius start writing and recording 10 songs, five of which become a promo demo EP entitled "Pseudo", where 200 copies only were printed.

1998-99 - Luke joins cog and rehearsals begin enhancing momentum for the band to enter the live arena.

1999 - cog play any venue in Sydney that will have them and play to almost noone. Most performances are done instrumentally with the exception of a few songs Flynn explores vocally, eventually becoming the vocalist for the group.

2001 - cog are picked up by Owen Orford of TPA (Trading Post Booking Agency). TPA adds cog to their roster and touring begins seeing the band play in all surf towns and major cities up and down the East Coast of Australia, supporting and headlining shows. cog also do their first major residency at the Excelsior Hotel that lasts 4 months every Wednesday night, cementing a real following in Sydney. A Melbourne residency at the famous Espy Hotel also runs for a month at this time.

The Just Visiting EPs - Parts 1 and 2 (initially planned as an album), were released in Australia on Little Samurai Records (Feb and Sept 2002). The EPs were recorded and produced by Lucius and Flynn in 1998 at Stage Door, Rehearsal Room 1 on a Tascam 688 port-a-studio. The bed tracks for the drums and guitars were done with 5 x Shure 58 microphones. The bass was recorded by Lucius at his house on the same desk. All the music was mixed by Lucius, Flynn and Zack at "Rhythm Squad Studios", Coogee twice until we got it right!! The Vocals were all done later on a Yamaha O2R desk, recorded by Lucius, Flynn and Luke with Hamish Adam engineering, at Arcadia Studios in Bondi Junction, Sydney. The EPs were then mastered by Mazen Murad at 301 studios in Sydney.

cog play the Sydney Big Day Out Festival and complete their first big support with System Of A Down at the Hordern Pavilion. Touring relentlessly to support the EP release, cog consequently won "Best Emerging Live NSW band" at the Australian Live music Awards.

2003 - Open Up, a long time band jam and crowd favorite - the cover of John Lydon/PIL and Leftfield classic and the only non-original song they played - was cog's 3rd release in March 2003. Produced by cog and recorded by Sean Boucher at Evolution Solutions Studios, Winston Hills, Sydney and mixed By Dave Petrovic and cog, it was then mastered at Sony Music Mastering by Toby Learmont. Open Up was released as a maxi-single, with 2 full length versions of Moshiach and Paris, Texas that appeared on the Just Visiting EPs as edited versions. The 4 minute radio edit of Open Up gained high rotation airplay on JJJ (Australia's biggest youth network station) and was supported by mainstream rock station Triple M as well as many community stations around Australia. It debuted at #8 on the Hard Rock Charts and stayed there until June. In fact all 3 of cog's CDs were simultaneously in the Aria Hard Rock Top 20 charts in May and again in June 2003 - some sort of indie record it seems, with JV1 and JV2 re-entering the rock charts again and again. 2003 also saw cog tour nationally on the Big Day Out Festival, and in Summer play their first metal event, 'Metal for the Brain' in Canberra. cog saw the year out playing the 'Falls Festival' at Lorne in Victoria and Marion Bay in Tasmania. The band was also asked to play at their first political rally - the World Trade Organization protest in Hyde Park in Sydney, against the Free Trade Agreement.

2004 - The band retreated to the demo studio and rehearsal rooms to work on new songs for their debut album, only doing a handfull of shows and one-off tours to road test their new songs. Dropped by booking agent TPA and picked up by Mark Lackey of The Atlas Booking agency, cog set out on the Breaking The Silence tour, which was a chance for the band to stand behind their political views on the war in Iraq, feeling it was wrong and unjustified. In protest at the gigs, the showing of the controversial film by John Pilger (Breaking The Silence - the truth and lies on the war on terror), was a very successful way for the cog's fan base to get some insight into this topic of debate. One of the last headlining shows of the year for cog was the 25th Anniversary for Utopia Records, Australia's largest independent record store, held in Sydney.

August 4 - cog sign their first deal with the Aloha Management Group. Aloha, consisting of Steve Betts and Dan Hennessy, are the force behind some of Australia's biggest bands, including Shihad, The Super Jesus and Front End Loader.

September - cog depart Australia for the US, arriving in San Fransisco on September 19, to start work on their debut album in Weed, California with legendary producer Sylvia Massy Shivy (System Of A Down, Tool, R.E.M.). The recording sessions began September 21 at Sylvia's studio, Radiostar Studios - a 1930's old art deco theatre. Mixing of the album was completed at the end of December and mastering was completed in Los Angeles.

cog return to Australia and commence the Running the Gauntlet tour up and down the East Coast, playing out the year's end at the Pyramid Festival on Phillip Island in Victoria.

2005 - cog's debut album The New Normal is released on April 12, 2005 through Difrnt Music. The band are currently working to secure a worldwide release, and touring extensively to promote the album. 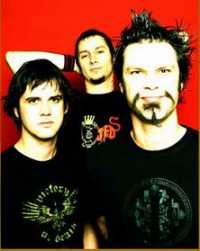