…in a bathroom in Paris we found ourselves. Steamed up windows, infinite rainy days, the kettle’s constant hiss and the weary moan of a dying ambulance summoned songs from another time…

We had split apart as sisters, abandoned one another and led completely different lives, gathering contrasting influences and tools that were unknowingly building towards the birth of CocoRosie.

Sierra began her exploration of singing with gospel and spirituals, and continued her devotion studying as an opera singer starting in high school. She received severe beatings from fat divas in Rome, NY and Paris, and although she attained many accolades from the world of classical opera she felt something was missing, some thirst that opera alone could never quell…

Bianca started writing songs at nine; bad love songs, poems, stories, to do lists… kept writing…tattoos, got lost in sociolinguistics, politics, fetishes.. She began singing acapella; in the shower, on the corner, in dimly-lit squats and speakeasies. She fled to Paris on a whim.

Desperate, spontaneous, from the Paris airport, Bianca calls to say; “Can I come stay a while?” Sierra asks why…

We had spent our lives on separate planets, despite the fact that we shared the same child life, and this unplanned rendezvous was like a blind date arranged by angels.

So over the next eight months, tucked away in a Paris shoebox, listening to the rain, we made La Maison de Mon Rêve and CocoRosie was born.

CocoRosie is Bianca and Sierra Casady. Sierra sings and plays guitar and flute. Bianca sings and does percussion (rattles things, makes things squeak, shakes a gold chain belt). They write all the music together.

La Maison de Mon Rêve was written and recorded in a tiny apartment in the 18th district of Paris during the spring of 2003. 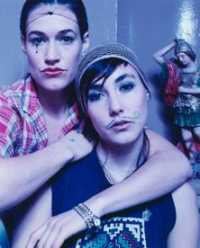