One of the premier songwriters of today, Chris Tomlin is shaping the language of worship for generations present and future. And yet his gifts are rooted in one central truth, that God is the center of everything.

Even as a small town Texan boy pounding out new tunes with his rag-tag garage band, Chris Tomlin had been blessed with a passion for purpose. He wanted to be more than just another guy with a song. As he grew, he became even more aware of the fact that everything-what we do, who we are-exists only for God's glory. Tomlin's sophomore studio project, NOT TO US, is an organic, edgy pop blend of his most compelling lyrics to date, the longest and most rewarding mile in his passionate pursuit of real life.

NOT TO US is not just another worship album; it's a soundtrack for all of life.

"God is a mystery beyond our comprehension," says Tomlin, whose most recent work includes WoW Worship and Passion: Our Love is Loud. "We can't figure God out. He won't be boxed in. He's bigger than all our questions and bigger than our answers. And when our lives become aligned with Him, we see life in a different light, hearts are restored and people are healed."

Already well known for his work with Passion, a ministry to college students nationwide, and for penning such classics-in-the-making as "Forever" and "We Fall Down," NOT TO US features all original songs written or co-written by Tomlin, who just finsihed up a fall 2002 tour with Rebecca St. James. Additionally, the anticipated project includes a song co-written by Matt Redman (Michael W. Smith, Tree63, Passion Worship Band), perhaps the most prolific and important songwriter to come out of the UK since Graham Kendrick.

Produced by Matt Bronleewe (Jars of Clay, dcTalk, Natalie Imbruglia) and Sam Gibson (Elvis Costello, Crowded House) Tomlin's sophomore album packs a live, raw energy and eclectic sound. "This one was more like home," Tomlin says of the making of NOT TO US, "more of a live album feel, more raw. This band has been playing together for a long time. And so what you hear and experience throughout the recording sounds like what you hear when you hear us play live."

At the heart of NOT TO US is the answer to the tug of war between our human desire to be celebrated and the reason we were created: to worship God.

"People are not meant to be worshiped because we're always going to mess up," he says. "Our culture longs to ascribe value to so many things that aren't of God, so anytime we can focus on God, and through that help people do the same, we're doing what we were put here for. And that's a powerful thing."

Illuminating the album's fundamental premise, "Famous One," a contagious declaration that Jesus is the supreme celebrity, has already connected in a very powerful way with live audiences nationwide and is destined to be a modern worship favorite for years to come. "I had no idea that 'Famous One' would connect with people in such a powerful way," Tomlin says. "I loved the idea of the word 'fame' for God. Sometimes, I think our society doesn't understand the words we use for God-but fame is a word we all can understand." He writes with his audience in mind, crafting profoundly moving universal lyrics that ride on simple, singable melodies.

"Wonderful Maker," co-written with Matt Redman, is another stellar example of the lyrical depth on NOT TO US. Loosely based on Job's grateful response to God, the song juxtaposes the cross and creation. "While God was creating the world, He was also saving it," Tomlin says. "That's a big concept to get your arms around, but people are really responding to it in a powerful way."

And as for the theory that this God-centered expression is a trend that will fade as quickly as it came, Tomlin disagrees. "True worship, worship in spirit and truth, has never been and will never be a trend. This style of music may be a trend, but that's because God's blowing a fresh Wind of His Spirit in so many people who are coming to realize that anything that just builds us up as people isn't worth much. What gives God the spotlight is important. And that's all we're about."

New songs.
New classics.
A new soundtrack for real life. Chris Tomlin's NOT TO US. 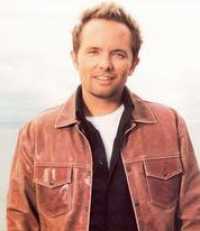