Sometimes driving directions look overwhelming, and then you get in your car to use them, and the drive is smooth through until the end. Just as a song by Chiodos takes you in many directions, but when it’s done you never question how you got there.

The band Chiodos formed in high school, just outside of Flint, MI. Then known as The Chiodos Bros, they played the local scene and began writing original music. In June 2002, they recorded a demo called, The Best Way To Ruin Your Life, which gave the group a healthy local following.

Choidos (now with a shortened moniker) has covered plenty of ground since then. Lead singer Craig Owens’ bout with pneumonia in 2004 stalled the band’s progress for a brief period of time, but soon after, the band was ready to join the Equal Vision Records family to release their new album, All’s Well That Ends Well.

After spending a month recording this past winter, All’s Well That Ends Well blasts menacingly at times, and sighs thoughtfully at others. But the various styles found in Chiodos’ past songs have become more defined on the new album. "Everyone [in the band] really wanted this album to be somewhat more categorized," says Owens. Chiodos’ maturity is evident in the dueling guitar riffs of “There’s No Penguins in Alaska;” and the defiant lyrics, “take these misunderstandings/and send them back where they came from/it’s hard enough to live life” from “All Nereids Beware.”

Despite the complex range and genre-shifting within songs on the album, when asked how the album will transcend live, Owens sums it up by saying, “We take pride in sounding better live [than on the album].” Considering he and keyboardist Brad Bell grew up together, Owens boasts their sincere vocal harmonizing doesn’t falter under the bright lights: “We don’t want to let the kids down.”

Chiodos’ style and layered complexity have strengthened over time, yet they’ve always been in control of their music. Shortly after their demo release in 2002, the band used guitarist Pat McManaman’s bedroom to self-record, engineer, produce, and master their first full-length album, The Heartless Control Everything, which was soon after released on Search and Rescue Records. Although the album was a raw effort, it did not go unnoticed – fans from hometown state of Michigan and beyond buzzed about the album, along with praise of the band’s live performances.

Once The Heartless... was finished, the band hit the road for 7 full U.S. tours (including performances with Yellowcard and Coheed & Cambria), in which time sold thousands of CDs and gained countless enthusiastic fans and friends. All’s Well That Ends Well is sure to impress these die-hards as well as new listeners, with a tighter, quicker punch than previous efforts.

The band’s style only definable as a melting pot – band influences include Saves The Day, Queen, and At The Drive In – a song could begin with electronic beats behind piano, ease into metal guitar riffs, then speed into a poppy melodic vocal line that leaves you humming. Lead singer Craig Owens says, “We don’t want to feel pressured into a single genre…we have a rule to stay away from ‘verse-chorus-verse’ songwriting.”

From a band who named itself after an obscure term used in 80’s horror movies, Chiodos’ All’s Well That Ends Well, is more tangible than their previous releases, which will ignite interest from metalheads, pop-punkers, and curious music fans in general. Chiodos has created an album that defies generic song structure – yet continues along on its signatory song-map, where no one gets lost and everyone ends up in the right place. 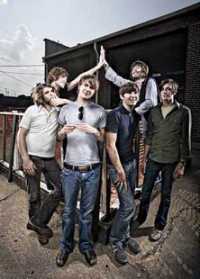