My father was a Greek Cypriot and my mother was Swedish, but for some reason they decided to send me to a Roman Catholic school. I suppose that was the first anomaly of my life. Born Steven Demetre Georgiou, I was brought up Greek Orthodox, so didn抰 take part in the religious rituals at school; you could say it meant I started out life as an observer.

My family weren抰 at all strict, but they did want me to have a good moral grounding - hence their reasons for sending me to a Catholic school. I learned about good and bad, and about morality in general, and religion definitely left a strong impression on me. When a friend of mine refused to kneel at prayer because he didn抰 want to spoil the crease in his trousers, it caused a fracture in our friendship. I must only have been about seven at the time!

Ironically, considering I have now converted to Islam (and am now called Yusuf Islam (Bio)), my upbringing was very anti-Muslim. Essentially, the Greeks and Turks were enemies, so I adopted the stance of my Greek Cypriot father and hated everything about the Turks, including their religion: 'Islam', whatever that meant.

There was a Muslim family living near us and, although we never hurled abuse at them or anything like that, we did keep our distance. I grew up in the West End of London. My parents ran a busy restaurant in the upper part of Shaftesbury Avenue and so the atmosphere I was born into was exciting. Life was all lights, hurried people and black taxis. We were close to the theatres and that is definitely where I picked up my interest in the entertainment industry.

I was the youngest of three, and I抦 sure my brother and sister would say I was very spoiled as a result, but I certainly did my fair share of hard work. By the time I was 10, I was already working as a waiter in the shop, clearing away and mopping up, so I suppose that抯 when I first learned how to serve people. Sometimes, I turned the kebabs, but normally things went quite well and, because I was so young, I got lots of tips from the customers.

Being a mixed-race child wasn抰 difficult. The part of London I grew up in was so cosmopolitan that I didn抰 stand out at all. But it was an interesting situation at home. The hot and cold of my parents?different personalities meant I learned to maintain a kind of balance throughout my life. I loved the emotions of my father and the fact that he was so very strong-willed, active and smart. But his temper was sometimes a bit much for some of us. Our mother, on the other hand, was very cool and collected, and always found time to listen.

But I do remember a bit of shouting in our household. I must have been about eight when my parents decided to break up. It was an unusual separation because they both remained in the house. We all lived above the restaurant, with my father taking a first floor room, while my mother took another.

We all shared a single living room but the real centre of activity was the shop, where my parents both continued to work. The only difficulty was the sleeping arrangements. Occasionally, I would become the object of a tug-of-war between them. Because my father usually won, I would end up sleeping in his room most of the time. Strangely, though, I was always closer to my mother.

After they separated, she tried to set up home in Sweden, and I found myself going to school there for about six months. I was the only dark-haired, dark-eyed, olive-skinned boy in the whole blond- haired, blue-eyed school. At play time, I was the centre of attention. I had a section of the playground for myself where all the boys could come to take a look at me. This way, I got to choose who would be my friends that day, but it increased my sense of being an observer.

I was always a sensitive child and tended to look rather closely at life for someone so young. I was quite an introvert and was forever thinking. I can抰 remember a time as a child when I wasn抰 thinking about something.
Once, I tried not thinking, while I was on my way to school, but I couldn抰 manage it.

When we returned to my father in London, I found myself always trying to patch up things between my parents. I felt I had to be a bridge between them.

Later, when I became famous, my success was a great source of pride to both of them. In a way, I think that helped to keep us all together.
I showed my artistic ability at a very young age, and it was my mum who encouraged me. I would often draw late into the evenings, but instead of telling me to stop and go to bed, she would leave me to get on with it. My interest spread to music, which gave me a way of expressing all those thoughts. We had a grand piano at home, and I soon learned how to play it.
Later, I switched to the guitar and started writing songs which I recorded on to a demo tape in a studio just down the road. Once I had changed my name to Cat Stevens (Bio), I was on my way.

I had my first hit when I was 18, with a song called 慖 Love My Dog (Song)? All that fame led to a big change of lifestyle. I was being interviewed, photographed and chased by girls. Although I抎 love to say none of that actually changed me, it did have an effect. Rather than worrying about being too young for this success, I thought I had left it too late, my expectations were so high.

I had grown up in Soho and was pretty streetwise. I suppose I was quite naughty when I was young, trying to see what reaction I would get from my parents. I smoked and went off to art school at 17, and that exposed me to lots of ideas and new customs.

Although I lived life fast, I was always searching for answers. I was aware that there was something I had to achieve in life. At first I thought that if I had luxuries, that would answer all my problems, but it didn抰.

At 19, I contracted tuberculosis and was whisked off to hospital. It was a very scary time - I came face-to-face with my own mortality. It sparked off my first earnest search for a way forward. The thoughts which I developed during that teenage period of illness helped me to reflect on things, and paved the way for the life I now lead as a Muslim. 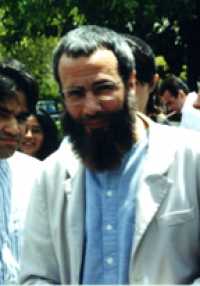