Carole Klein, 9 February 1942, Brooklyn, New York, USA. A proficient pianist from the age of four, King was a prolific songwriter by her early teens. When friend and neighbour Neil Sedaka embarked on his recording career, she followed him into the New York milieu, recording demos, singing back-up and even helping arrange occasional sessions. As a student at Queen's College, New York, she met future partner and husband Gerry Goffin whose lyrical gifts matched King's grasp of melody. She completed a handful of singles, including "The Right Girl" (1958), "Baby Sittin'", "Queen Of The Beach" (1959), prior to recording "Oh Neil" (1960), a riposte to Sedaka's "Oh Carol". Although not a hit, her record impressed publishing magnate Don Kirshner, who signed the Goffin/King team to his Aldon Music empire. They scored notable early success with the Shirelles ("Will You Still Love Me Tomorrow"), Bobby Vee ("Take Good Care Of My Baby") and the Drifters ("Up On The Roof") and were later responsible for much of the early output on Dimension Records, the company's in-house label. The duo wrote, arranged and produced hits for Little Eva ("The Loco-Motion") and the Cookies ("Chains" and "Don't Say Nothin' Bad (About My Baby)") while a song written with Bobby Vee in mind, "It Might As Well Rain Until September", provided King with a solo hit in 1962.

Although this memorable and highly evocative song barely reached the US Top 30, it climbed to number 3 in the UK. However, two follow-up singles fared less well. The Goffin/King oeuvre matured as the 60s progressed, resulting in several sophisticated, personalized compositions, including "(You Make Me Feel Like) A Natural Woman" (Aretha Franklin), "Goin' Back" (Dusty Springfield and the Byrds) and "Pleasant Valley Sunday" (the Monkees). The couple also established the short-lived Tomorrow label, but their disintegrating marriage was chronicled on King's 1967 single, "The Road To Nowhere", the year they dissolved their partnership.
King then moved to Los Angeles and having signed to Lou Adler's Ode label, formed the City with ex-Fugs duo Danny Kortchmar (guitar) and Charles Larkey (bass). (The latter became King's second husband.) The trio's lone album, Now That Everything's Been Said, included the artist's versions of "I Wasn't Born To Follow" and "That Old Sweet Roll (Hi De Ho)", covered, respectively, by the Byrds and Blood, Sweat And Tears. King began a solo career in 1970 with Writer, before fully asserting her independence with Tapestry. This radiant selection contained several of the singer's most incisive compositions, notably "You've Got A Friend", a US number 1 for James Taylor, "It's Too Late", a US chart-topper for King, and "So Far Away".

Unlike many of her former production-line contemporaries, King was able to shrug off teen preoccupations and use her skills to address adult doubts and emotions. Tapestry has now sold in excess of 15 million copies worldwide and established its creator as a major figure in the singer-songwriter movement. However, the delicate balance it struck between perception and self-delusion became blurred on Music and Rhymes And Reasons, which were regarded as relative disappointments.
Each set nonetheless achieved gold disc status, as did Fantasy, Wrap Around Joy (which contained her second US number 1, "Jazzman") and Thoroughbred. The last marked the end of King's tenure at Ode and she has since failed to reap the same commercial success. Her first release of the 80s, Pearls, comprised "classic" Goffin/King songs, a release which many interpreted as an artistic impasse. Certainly King subsequently pursued a less frenetic professional life, largely restricting her live appearances to fund-raising concerns. In the early 90s she had relocated to Ireland. Her recordings also became more measured and if Speeding Time, Colour Of Your Dreams or City Streets lacked the cultural synchronization Tapestry enjoyed with the post-Woodstock audience, her songwriting skills were still in evidence. In the USA, Tapestry exceeded 10 million copies sold in July 1995.

After a number of years keeping a relatively low profile, King released Love Makes The World on her own Rockingale label. This album, probably her finest collection of songs since Tapestry, proves King now has the experience of age and a voice that has grown stronger. 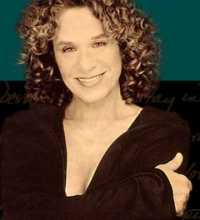