Well here's Canibus Central's version of how Canibus got to where he is now. Half of y'all won't read this shit coz you already know it, but for you beginners, read this. It's the most accurate and extensive Canibus Bio on the www that I know of. Every site has a Canibus bio, so I thought Canibus Central should have one too, so here it is.

Canibus. Where do you start? He is, in my opinion, the most gifted emcee in the field of battling that I have ever heard. His very large vocabulary and sharp wit coupled with his raw voice and incredible talent to rhyme words together make him a pure battling machine. Any emcee I know of would fear battling Canibus. Just ask LL Cool J. hahaha!

So where did Canibus start out?

Well, originally, Canibus (Germaine Williams) was born in Jamaica in 1975, to parents Elaine and Basil Williams. His father, Basil, was an international test cricketer for the West Indies and Jamaica. To view his career stats, click here. Anyway, Canibus is the oldest of two boys. After his parents divorced (I guess, it makes sense, but I don't know that for sure) Canibus's Mother, Elaine, decided to move to the US, where she worked for a housing project company which meant that she had to move her family around a lot. As a kid, Canibus lived in Jamaica, D.C, London, Atlanta and New Jersey. According to Canibus.com, he still lives in NJ.

Due to all the moving around, Canibus was never a really popular kid, as he never had time to settle into a neighborhood. This lead to Canibus writing rhymes and shit like that, and getting into hip-hop. It's commonly believed that Canibus got into breakdancing while in London, but I asked him about that and he said it wasn't true. Canibus learned breakdancing before he moved to London, and then showed others how to do it while he lived there. He told me heads flipped when he first showed London kids his breakdancing, explaining to me like this, making it easy for my Aussie brain to work it out:

"For them, it was like, always reading about Kangaroos and seein them on TV, and then actually seein a real Kangaroo. Know'msayin?"

When Canibus was about to leave D.C for Atlanta, Canibus' friend Pat called his cousin, Webb, in Atlanta, telling him Canibus was dope. Webb was like, "yeah, whatever, bring him through" Expecting just another average emcee. Webb was proven wrong. Canibus showed he has much skill and the two formed a group by the name of T.H.E.M (The Heralds of Extreme Metaphors).

T.H.E.M performed at the 1996 Gavin Convention, impressing Group Home Records CEO Charles Suitt. Canibus and Webb also handed him an 18-Track demo tape that night which they had made in two and a half months on Ensoniq EPS 16 and ESR 10 Drum Machines.

T.H.E.M also encountered a well-known and continuously-documented battle with none other than the Wu-Tang Clan and a highly-skilled Wu-Family member by the name of Killah Priest outside a popular nightclub in Atlanta.

Webb and Canibus first battled RZA and Raekwon, it's never been revealed who actually won the battle, but an impressed RZA called for U-God and Sunz of Man to challenge the young duo. T.H.E.M were holding it down until Killah Priest was brought in. KP kicked an obviously massive six-minute freestyle to end the battle. Respect was won by both crews in the end, and the crowd of around 100 people were certainly well-entertained.

Unfortunately, T.H.E.M broke up bitterly when a third party was introduced and beef between Canibus and Webb followed.

Canibus worked as a record intern at Group Home, and according to XXL Magazine, Canibus made it as high as General Manager of Group Home Records before starting his career as a professional lyricist.

Canibus' first official appearance on an album was in a track with Ras Kass and Heltah Skeltah on the Rhyme and Reason Soundtrack entitled Uni-4-orm. Canibus was invited to perform on the track by Ras Kass, who had much faith in the young and hungry lyricist.

But it was Canibus' third appearance that made headz really pay attention. Hooking up with The Lost Boyz, A+ and Redman on 'Beasts From The East', Canibus set the microphone on fire and caused many bad cases of whiplash as everyone was turning their head when they heard this young emcee's stunning 2 minute, 37 second verse. The epic verse also gained Canibus his first appearance in The Source, as he took out 'Hip-Hop Quotable' honors for the month of July, 1997, or issue 95, however you wanna put it.

Canibus then laced many a hot joint. After 'Uni-4-Orm', 'Music Makes Me High (RMX)' and 'Beasts From The East', Canibus joined The Firm to set the track 'Desperados' alight. This was followed by '4,3,2,1' with LL Cool J, Method Man, Redman and DMX. Canibus then made another stellar performance with another favourite emcee of mine, Common, on the track 'Making A Name For Ourselves'. He also lended vocals to the remix of Yvette Michelle's 'DJ Keep Playing'

After his appearance in '4,3,2,1', a well-known and much argued-about beef between Canibus and LL Cool J followed. If you wanna know the details, click here.

Canibus had really made a name for himself, but it was at the opening of Puff Daddy's restaurant, 'Justin's', that his life would change up even more. Canibus was introduced by Jay-Z to Wyclef Jean. Wyclef invited Canibus to perform on his latest single, the remix to Gone Till November, with R. Kelly and Destiny's Child.

Canibus made his second appearance in The Source in issue 101, headlining the magazine's "Future Shock / Rap's New Generation" Article, where the following was written about him:

"..To hear Canibus so savagely rifle his brand of verbal abuse at potential adversaries is to witness the resuscitation of a dying art."

Damn. In the same issue, Canibus also interviewed the God, Rakim. The interview will no doubt go down in hip-hop history, as it was almost a torch-passing like event. The greatest to ever bless a microphone interviewed by the emcee most likely to continue his legacy.

In next month's issue of The Source, Carlito Rodriguez had this to say about Canibus:

"...MC's are in effect again....Leading the sabre-toothed, hungry pack is that verbal time-and-space bender hisself, Canibus."

And then, writing about the then forthcoming album -

"..If his short, yet deadly, track record is an indicator, the art of MC'in is about to be stepped up a few levels"

Yes, Canibus had arrived, and the whole hip-hop world new about it.

After a short while, Canibus became a member of Wyclef's Refugee Camp, and nationwide fame followed. Wyclef became Canibus' manager, and invited him to join the Refugee Camp at the Smokin Grooves Tour, where Canibus rocked the crowd with a lion on stage.....dope.

Over the next few months, Canibus continued to create hype with appearances on various mix-tapes around the world, his single from the Bulworth Soundtrack, "How Come", and the Universal Records compilation album, U-N-I Vs. All, which featured the ultra-hot cut "Boys 2 Men" Which starred Canibus, Mr. Cheeks and A+.

September 8 was the release date for Canibus' long-awaited and very much hyped debut release, 'Can-I-Bus'. Canibus had a dilemma on his hands. His strength is obviously battle rap, but to come with a whole album of battle rhyming, Canibus would be considered one-dimensional. On the other hand, if Canibus came with an album of anything other than battle rhyming, would the fans be ready for it? Plus, he would probably be accused of not giving the fans what they wanted. Damn, what was Canibus to do?

Surprisingly, there was no delay. Can-I-Bus came out right on schedule and sold 270 000 copies in the first week of release. It was greeted with a flurry of bad reviews. Canibus had come with some very thought-provoking shit on the album, and those capable of looking beyond a bad beat enjoyed it. Unfortunately, the media couldn't look past the production, provided by Wyclef Jean and the Refugee Camp. The beats on this album were nothing short of terrible in my opinion. Particularly 'Rip Rock', 'Let's Ride' and 'Hype-Nitis'. The boring 'What's Goin On' would have been a good cut if it weren't for the overall dreary feel it had. Rip Rock had some dope lyrics and a good concept, but one very shitty beat. Canibus came with the hot skills on each track, but appalling production really let the whole album down.

Despite the poor reception to the album, it did go gold.

Not happy with the hip-hop world's dislike of his album, Canibus made two pretty big moves. He first promised an EP (entitled "The C-Quel") with the kind of shit the hip-hop crowd was looking for in his debut. It's set to have production from my favourite producer, DJ Premier, and feature guest appearances by none other than RAKIM, Raekwon and Rebel INS. Secondly, Canibus decided to relieve Wyclef of his managerial duties. Giving this reason:

"When we were on the Smokin' Grooves [Tour] and everything," Canibus said, "he was a manager, you know what I mean. [Wyclef] helped me get on Smokin' Grooves. He helped put certain things on soundtracks, like the 'Bulworth' track. He helped me produce the album, and he was like a managerial source... We had a talk, and we kicked it and I feel like I should get management elsewhere, you know what I mean, because he's an artist and it's difficult for him to manage another artist." 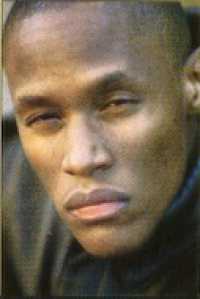