Several bands seem to share this name. Also, there are a few tracks that might appear here from theatrical montages of Cabaret, the musical. (Which explains the similar artists being all musical-related)

-Cabaret is a 1966 Broadway musical set in Berlin in 1929 through 1930 during the run-up to the coming to power of the Nazis under Adolf Hitler. The musical is comprised of the book by Joe Masteroff, lyrics by Fred Ebb and music by John Kander.

It is based on John Van Druten's play I Am a Camera, which was in turn based on the novel Goodbye to Berlin by Christopher Isherwood. Its initial run was produced and directed by Hal Prince and starred Bert Convy, Jack Gilford, Jill Haworth, Lotte Lenya, Joel Grey, Peg Murray, and Edward Winter. Such soundtrack as the:

Cabaret has somewhat of a cult status after their first album, "Cabaret", received a wide span of good reviews from both the alternative and mainstream Brazilian music press. The band is also known for their theatrical live performances, often gaining new fans after energetic performances, specially of underground hits "Messias Pessoal", "Dama da Noite" and "Cadáver no Palco". The band's website is http://www.radiocabaret.com.br . 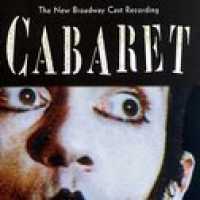