The most anticipated solo album from the No Limit family is finally here.... C-Murder. C-Murder was born in New Orleans, Louisiana and began rapping at an early age. It wasn't until his brother and mentor, Master P opened No Limit Records that C-Murder began taking his hobby more serious. A member of the superstar trio, TRU, along with his two brothers, Master P and Silkk The Shocker, C-Murder gained a national profile in 1997 with "TRU 2 DA GAME" the sophomore album from TRU that topped the Billboard charts and went on to sell over two million copies.

C-Murder has had major appearances on all of No Limit Records' Gold and Platinum releases including Mia X's "UNLADY LIKE", "I'M BOUT IT" platinum soundtrack and Master P's multi platinum solo album "GHETTO D", to name a few. C-Murder credits Master P. Scarface and Tupac as his biggest influences in the rap industry. CMurder also made his acting debut in 1997's multi platinum straight to video release "I'M BOUT IT" and is also costarring In this year's comedy "I GOT THE HOOKUP" starring Master P and AJ Johnson. The film is slated to hit theaters nationwide this Spring. After several appearances, C-Murder is set to release his awaited solo album "LIFE OR DEATH".

The album is another No Limit collaboration that's sure to hit platinum. All the tracks on "LIFE OR DEATH" are produced by No Limit's platinum production team, Beats By The Pound and has appearances from UGK, Silkk The Shocker, Mia X, Master P. Mystikal, Fiend, Mr. ServOn and many more. C-Murder describes "LIFE OR DEATH" as an album he is very proud of. "The album has something for everyone and I think when people listen to it, they will feel that the anticipation of my solo effort was worth the wait." he says. 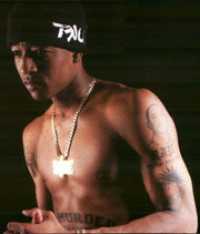