Whereas any hope for the return of noisy pop seemed to have evaporated, B.R.M.C and their sharp-edged guitars suddenly come to revive the flame of noisy rock in the great tradition of The Jesus & Mary Chain and Velvet Underground.

Based in Los Angeles, B.R.M.C (or Black Rebel Motorcycle Club, the name of Marlon Brando's biker gang in The Wild One) combines distorted and acoustic guitars, raspy voices and pounding drums. Through their obviously influenced music, the group openly proclaims its membership to the noise movement and its psychedelic heritage. The sharp and dirty guitars clearly evoke William Reid and Lou Reed, while the voice has very Jim Reidlike intonations and the drums echo the primitive style of Moe Tucker. Joy Division, Killing Joke and early Oasis also come to mind while listening to this disc. B.R.M.C., however, is not an untalented clone satisfied merely to mimic. The group possesses the ardor of its youth, and their steps which are authentic above all, has no mission other than to take over the torch of their illustrious predecessors and to perpetuate the tradition of savage rock, antipodal to the aseptic productions of the moment.

With its mixture of acoustic and saturated guitars, the single "Love Burns" recalls the Psychocandy period of the Jesus & Mary Chain and offers an unstoppable anthem. "Red Eyes and Tears" continues on the impetus, injecting very American sounding guitars. The furious "Whatever Happened To My Rock'N' Roll" flirts with "Rock'N'Roll Star" by Oasis and seems to point a finger at the groups who sold their soul for commercial success. The rhythm slows down on the psychedelic "Awake" while "White Palms" is supported by powerful saturated bass. "As Sure As the Sun" is an insistent, classic piece whereas "Rifles" has the blackness of Killing Joke. The soft "Too Real" has a spike of the Beatles. " Spread Your Love" then comes to propagate its fever in the style of Velvet Underground's "White Light". "Head Up High" is a beautiful ballad, noisy and bewitching. The album finishes on another ballad, "Salvation", which would not have seemed odd on Stoned And Dethroned by the Reid brothers.

One recalls how noisy rock, English in origin, arrived to tap into American roots of rock. With the excellent Black Rebel Motorcycle Club, B.R.M.C logically takes over where the English left off and revitalizes a dying genre. Let us hope that B.R.M.C awakes the groups to which they pay homage from their lethargy. 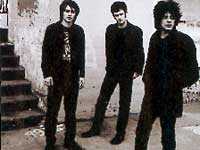