Britney Spears may have titled her new single "Me Against The Music," but she has rarely been more creatively in tune than she is right now. "I feel like I've hit a great new stride as an artist," she says with pride. "I've worked hard, and I feel like I've grown on so many levels."

In truth, "Me Against The Music" is hardly about declaring war against grooves. "Actually, it's about the intensity that people approach music with," Britney shares. "It's about getting totally lost in the music and pushing yourself to the edge in every way you can imagine. I love thoroughly immersing myself in music, and I wanted to capture that intensity in a song."

Britney's musical intensity and her evolution from a teen renegade into a provocative young woman are undeniable throughout "In The Zone," her fourth Jive Records collection. First and foremost, the project shows her flexing notably strong and mature songwriting muscles. She co-wrote 7 of the project's 12 sterling new compositions, collaborating with such heavy hitters as Red Zone ("Me Against The Music," "The Hook Up"), The Matrix ("Shadow"), Moby ("Early Mornin'"), and Cathy Dennis ("Toxic," "Showdown"). Also contributing hit worthy material to the album is R. Kelly ("Outrageous"), Ying-Yang Twins on “(I Got That) Boom Boom.”

Perhaps most significant is the appearance of pop icon Madonna, who lends her voice to the single "Me Against The Music." Collaborating with one of her all-time greatest musical influences was a dream come true for Britney. "The experience was beyond words or description." she says. The two forged what has become a powerful bond while rehearsing for their now-notorious performance on the MTV Video Music Awards this fall. "As we were working together, there were moments when I simply could not believe that I was standing there on stage next to her. It was never even in the realm of fantasy for me."

The musical union of Britney and Madonna within the taut, classic-funk groove of "Me Against The Music" is quite real, though, and it reveals each of them at their most kinetic and soulful. The song's accompanying video clip, directed by Paul Hunter, shows Madonna enticing Britney through a maze-like underground club, only to disappear into thin air when Britney gets close enough to touch her. The clip is rife with symbolic gestures of Madonna passing the baton pop power to Britney --- an image that the young artist finds exciting, humbling, and perhaps a bit premature.

"There is only one Madonna --- and there will always only be one," she says. "My goal is to have a career that is equally as special, but one that is completely unique to who I am. I'm honored by all that Madonna brought to this song. I really love the flow we share --- both on the track and as friends. I think you can feel the chemistry and positive energy we shared. It's completely natural and relaxed."

The natural and relaxed vibe of "Me Against The Music" is indicative of every note and beat comprises "In The Zone," an album that runs the stylistic gamut from streetwise hip-hop and electro-trance to new-wave-etched rock and well-crafted pop. From top to bottom, Britney effectively expands the parameters of mainstream musical consciousness with songs that lure listeners with infectious hooks, and then captivates them with layers of clever lyrics and deft instrumentation.

"Putting this record together was an incredible journey for me," Britney says. "I had the freedom to explore and experiment with some of the most exciting people in music. In the end, that allowed me to make a record that is a pure reflection of where I am right now."

What we learn from album highlights like the rambunctious "(I Got That) Boom Boom," which features the Ying Yang Twins, and "Everytime," a stark, delicate collaboration with Guy Sigsworth, is that Britney has grown into a fearless artist. "Those songs are particularly special to me, because neither of them sounds like anything I've ever done before," she says. "'Boom Boom' is so rough and edgy and fun, while 'Everytime' is so raw and spare. It's me stripped to my core as a singer and as a songwriter. It's as honest as I've ever been in my music. I loved working with Guy on that track. He made me feel comfortable and safe enough to go the full distance, emotionally and as a performer." Britney also has high praise for Moby, who worked with her on the mid-tempo "Early Mornin.'" "He's such a pure-hearted guy," she says. "He's so cool. He played me a really cool track, and I thought it was brilliant. It's turned out to be one of my favorite songs on the album."

She describes "Early Mornin,'" which unfolds with a deceptively insistent, easy-paced dance groove as a day-after-the-party jam, which balances some of the more assertive, dance floor-friendly cuts on "In The Zone." "Some songs are generally about going out and wanting to have a good time," she says. "One of the things I did while working on this album was write about a lot things like going out with my girlfriends, everyday experiences that I was going through. 'Early Morning' is about just going out and feeling bad the next day." Elsewhere on "In The Zone," Britney shows her sultry side, particularly on the steamy, turntable-ready "Breathe On Me," a Mark Taylor production that she characterizes as being "very vibe-y, trance-y. It's about being with a guy and not even having to really be with each other, but just the intensity and the anxiety between not saying anything. You don't even have to touch me, just breathe on me."

Among the more sensual songs on the album is "Touch of My Hand," on which Britney seductively floats her voice atop an arrangement of pillowy strings and languid, Middle-Eastern-kissed guitar lines. "It's tastefully done," she says of the track. "And I think it's real. It's nice and it's real. It's whatever your take is. Some people may think it's a little much, but that's where I'm at with my life. ... It's not freaky freaky, it's just a little freaky." Stepping out on a creative limb has been the basis for Britney's entire career. Dubbed by MTV as "one of the last teenage pop superstars of the 20th century," Spears enjoyed her breakthrough success at the end of 1998. She appeared in local dance revues and church choirs as a young girl, and at the age of eight auditioned for The Mickey Mouse Club. Although she was too young to join the series, a producer on the show gave her an introduction to a New York agent. She subsequently spent three summers at the Professional Performing Arts School Center. She also appeared in a number of off-Broadway productions as a child actor, including 1991's "Ruthless." She returned to the Disney Channel for a spot on The Mickey Mouse Club, where she was featured for two years between the ages of 11 and 13. Her demo tape eventually landed in the hands of a Jive Records executive who quickly signed her to the label. She toured American venues for a series of concerts sponsored by U.S. teen magazines, eventually joining "N Sync on tour. It all added up to 1999's wildly infectious "...Baby One More Time" album to make its bow on the charts at No. 1. The set not only spawned a smash hit with the title tune, but also scored with the charming ballad "Sometimes" and the funky "(You Drive Me) Crazy." Before the album finished its impressive worldwide attack of the charts, it garnered Britney 4 MTV Europe Awards, including best pop performer, and 4 Billboard Music Awards, most notably female artist of the year.

The massive demand for new Britney material was satisfied when her 2000 sophomore collection, "Oops! ... I Did It Again," was released to a Spears-starved world in May. Once again, the title cut flooded radio airwaves, as did the anthemic "Stronger" and lovely "Don't Let Me Be The Last To Know." She also racked up more awards that year by taking home an American Music Award as favorite new artist, a Billboard Music Award as album artist of the year, and 2 Teen Choice Awards. Britney would later earn Teen Choice Award honors in 2001 and 2003. Ever-prolific, the artist returned in 2001 with "Britney," a spirited, assertive collection on which she began to reveal her mettle as a tunesmith, not to mention as a vocalist of increasingly soulful depth. She earned high praise for the wickedly sultry "Slave 4 U," as well as for the forceful "Overprotected" and the gentle "I'm Not A Girl, Not Yet A Woman." The album's was quickly followed by Britney's motion picture debut, "Crossroads," which proved that she has the talent and box-office pull to be a multifaceted superstar. "One of the true joys of my life and career has been trying out new things," Britney says. "I've loved every step of this journey I'm on. I love singing and dancing and acting and songwriting... it all energizes and inspires me." It's that philosophy that has sent Britney "In The Zone," a project that shows this ever-growing and ever-exciting at her absolute best... or as she would say, "for now." "I can't imagine ever reaching the point where I've hit the wall," she concludes. "There's always something new and challenging to tackle. I can't wait to see what happens next." 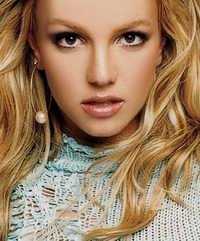