Brian McKnight is such a singer.

His gift is enormous. Beyond the sheer marvel of his voice, his brilliance as a writer, musician and producer place him in an exceptional category. His immediate predecessors are Donny Hathaway and Stevie Wonder, two other keyboard-based vocalists whose musical visions are architectural in scope. Like McKnight's, their songs blend structural complexity and emotional simplicity; they're deep but direct, solid but soaring. Most immediately, their voices remain with us through the bright days and dark nights of our lives. Their voices are unique.

Here, in the middle of the nineties, Brian McKnight's second album is a particular pleasure. If Brian helped usher in a return to romanticism with his debut three years ago, he reinforces that commitment with I Remember You. The theme of romance in McKnight's hands, however, is sculpted along unusual lines. The supple, brooding quality of his voice -- at once hypnotic and surprising -- seems to suggest a love never quite realized. A hunger remains. The compelling quest, felt in the flow of his seductive grooves, goes on and on. One song streams into another. Love sought, love lost, love regretted or remembered -- love remains in the mist, the wonder behind the melody, the mystery behind Brian's lush harmonies.

The voices all belong to Brian; as singer and instrumentalist, he is his own accompanist. Watching him work the studio, you feel the intensity of his focus. At 3 PM, he has nothing but a sketchy idea, strummed on acoustic guitar, tinkered on piano. By 9 PM, the idea is now a song, mastered on tape, complete with rhythm tracks and finished vocals. In six hours, McKnight has built and layered his music with a heady mixture of exquisite delicacy and muscular energy. He moves from instrument to instrument, from the control board to the vocal booth and back, seamlessly stitching a tapestry whose design is nothing short of dazzling. Ask him a question during the process and you'll get a one word reply, if any. He won't be distracted.

With the session over and the song in the can, Brian is ready to relax, happy to talk. At 26, B, as friends call him, is a king of casual. His tall lanky frame covered by sweats, sneakers and baseball cap, he looks like a roundball pro ready to roll over to the gym at a moment's notice. He exudes the restless energy of an athlete, the quick wit of the comic. He does everything quickly; he's a speed reader, fast talker, determined competitor and believer in die-hard discipline. Self-discipline is his style.

"I play basketball every day for two to three hours," B tells you in a voice whose syncopated rhythms mirror his up-tempo tunes. "Sometimes I'll work out with the big boys, buddies like Karl Malone or Charles Smith. But mostly it's just my own crew. Then it's off to the studio where I work until 3 or 4 in the morning. Musically and physically, I stay in shape."

The extraordinary shape of McKnight's music is formed by his singular history.

"At age four, I learned to sing seated on my mother's lap in the alto section of the choir," says Brian. "My mother is a fine singer and good gospel pianist. My grandfather was minister of music. The choir was a cappella, the voices were awesome, and I still hear the harmonies in my head."

Holy harmonies -- the harmonies of the African-American church -- form a foundation for Brian's sound. A quality of spiritual awe infuses his songs, whether the subject is innocent nostalgia ("I Remember You") or physical passion ("The Floor").

"The Church," he explains, "was Emanuel Temple in Buffalo, where I grew up. I'm the fifth generation of Seventh Day Adventists and the youngest of four brothers. When I was still very small, we formed a gospel quartet. Our models were the great gospel groups, the Swan Silvertones and Mighty Clouds of Joy. The McKnight Brothers were serious singers. The reputation went out: these boys could shout. My big brothers -- Claude, Freddie and Michael -- man, they were my heroes. Each was a leader in his own right. Outside church, they listened to jazz. Church music thrilled me, but jazz stimulated my mind."

"My childhood," Brian continues, "was a happy combination of the Platters and Nat Cole, Woody Herman and Gino Vannelli. My brothers loved sophisticated multi-leveled music -- they loved Steely Dan, for example -- and I inherited that appreciation from the get-go. They'd come home with albums by the Four Freshman and Hi Los. We'd hear those gorgeous close harmonies and rip them right off the records. I sat down at the piano and taught myself by ear. I was also a sports freak. I worshipped the Philadelphia 76ers and Dr. J; I dug the Dallas Cowboys and Tony Dorset. As a junior running back, I wore Tony's number 33. I had two dreams -- to play professional sports and professional music."

"At age eight, we moved from the snow to the sun, from Buffalo to Orlando. The Florida burbs were a little rednecky at first, but I was programmed to excel. Obstacles were there to overcome. Before I was a teenager, I could play jazz piano. I heard the changes and learned the electricity of improvisation. On my own, I went back to study the masters, Oscar Peterson, Art Tatum, the real geniuses. Meanwhile, the contest between music and sports was a tie. In junior high, I was a flat-out jock, running track, starting on the football and basketball teams. No one knew I could sing. I was still burning on piano, but not ready to step out as a vocalist. Until I got into Stevie Wonder."

"For me, Stevie is the Michael Jordan of music. A category of his own. His Original Musicquarium changed my life. He drew me deep into the tracks. His vocals are almost athletic. I call him a "hard singer," someone who can sing gently but has the power and range to do whatever he wants. That's what I wanted -- the sound I heard in Michael McDonald, Kenny Loggins, James Ingram, Michael Sembello, Bobby Caldwell -- guys with power and the ability to compose pop songs based on superbad jazz chords. I loved that combination."

By high school, the struggle was over. B's passion for music won out. "I got into trumpet," he explains, "and followed Wynton Marsalis. As a serious musician, Wynton was a heavy role model. By age 17, I was leading a group called Spontaneous Inventions, after Bobby McFerrin's album. Mom knew nothing about it, but I was painting on a mustache and playing clubs. We were into jazz fusion, Anita Baker, David Sanborn. Funny, but I've never been a sideman. I always liked leading my own groups."

Brian followed older brother Claude to Oakwood, a Christian college in Huntsville, Alabama. "Claude had formed Take 6," says McKnight, referring to the celebrated gospel group whose trademark harmonies have had a strong impact on contemporary music. "Just when I arrived at school," B adds, "Claude was heading for Nashville. Take 6 had finally gotten a deal and was about to make their first record. It was 1987."

Huntsville was the scene of McKnight's first exposure to a professional recording studio. Sound Cell was the home of Brandon Barnes, the gifted writer and musician who became Brian's mentor and partner.

"Brandon is a key to my artistic growth," B explains. "He first showed me the in's and out's of cutting tracks, making demos, working the knobs. We're still together today. In fact, we co-wrote five songs on I Remember You."

In 1989, during his second year at Oakwood, Brian's college career screeched to a sudden halt. "It's a little embarrassing," he confesses with a smile, "but I was caught with a girl in my room. Got kicked out. It happened in March. Mom said, Come home now.' But I said, I'll come home in June...if I don't have a record deal.'

"So I went to work at Sound Cell. Worked day and night. Turned out three tunes a day. By the time summer came 'round, I had 65 songs. I couldn't be stopped. I had to convince some record exec that I had the goods."

Ed Eckstine of Mercury was convinced. "When I signed the deal," says B, "I was 19. And arrogant. You couldn't tell me anything; couldn't tell me how to sing or what to write. Man, I knew it all. I had a lot of growing up to do -- as a person and artist. Fortunately, Ed was patient."

Brian McKnight, the debut album, wasn't released until 1992, three years after the signing. The album, a critical and commercial triumph, yielded the smash single "One Last Cry." Brian's production work with Vanessa Williams on her Comfort Zone sessions was widely praised. The McKnight/Williams duet, "Love Is," from the soundtrack to "Beverly Hills 90210," became a Top Five hit.

Today, B the studio man is much in demand. His inspired production of "U Will Know" from the film Jason's Lyric was a landmark meeting of a new generation of superb soul singers, many of whom look to McKnight as a leading light. Boyz II Men asked him to produce their Christmas album. And currently Brian is producing Take 6, a satisfying nod of approval from big brother Claude. B was also awarded a spotlight performance on Quincy Jones' new soon-to-be-released record; Q has him singing "Moody's Mood," a touchstone for great jazz singers.

In an age when categories like jazz and pop are increasingly blurred, Brian is increasingly comfortable. "The music I write," he says, "and the songs I sing must first move me. The sentiments must be real, the melodies must be magic. I want to create moods everyone can feel. Records don't need to be perfect, but they do need character."

The character of Brian McKnight is clear. In the studio, he is considered a young master. But his persona as a performer -- the quality of his voice, the character of his style -- is linked to a burgeoning renaissance in romance. For all his speed, his athletic agility, his astounding prolificity, his true strength is his romantic heart.

Great art is rare. And Brian McKnight is the rarest of artists -- a stunningly accomplished musician whose greatest accomplishment is the natural wonder of his voice.

"Poetic romance," he says before flicking off the studio lights and offering you a final word, "will always be the most beautiful music of all." 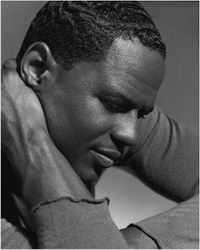