On her new album, The Story, Brandi Carlile opens up her heart, soul, and psyche in a series of memorable songs that invite you into her world. The intensity and authenticity of her music brought her to the attention of the Grammy Award-winning producer T Bone Burnett (Counting Crows, Roy Orbison) who came on-board to produce The Story. "This is the album I've always wanted to make," Brandi explains. "I love Elton John because his albums captured moments in time. My favorite records have the timeless feeling you get when a band locks itself in the studio for two weeks and comes out with a record."

Noteworthy tracks from The Story include: “The Story” where intensity comes from one of those “beautiful mistakes” from recording live when Brandi’s voice cracks in the chorus but she continues on, as well as the intricate harmonies defining "Josephine" which was recorded in only one take with the trio (Brandi and the twins) gathered around a single microphone, and “Cannonball”, a song recorded in Atlanta with Amy Ray and Emily Saliers of the Indigo Girls. "I don't think I would play guitar if it weren't for the Indigo Girls," says Brandi (who made a guest appearance on the Indigo Girl's recent release Despite Our Differences). “It means the world to me to have them on my record."

Brandi's first steps toward creating The Story began years ago outside of Seattle, where, while growing up, Carlile taught herself to sing and play guitar at a young age with her family. Dedicating her life to music, Carlile became a disciplined musician playing constantly and performing whenever possible as a way to learn her craft and develop her art. She expanded her sound with the addition of twin brothers, Tim and Phil Hanseroth.

Columbia Records signed Carlile in late 2004 on the strength of songs she'd been recording periodically at her home. Released in 2005, Brandi Carlile, her debut showcased those early songs along with several newly recorded tracks. Shortly after the release of Brandi Carlile,, Carlile left her home in Seattle and set out with twin brothers Tim (guitar) and Phil (bass) Hanseroth, with whom she'd worked on her earliest recordings and independent regional tours. The tightly knit trio, which forms the core of her band today, spent the better part of two years on the road. By the end of 2006, Brandi Carlile had embarked on several headlining tours and supported a variety of artists including Ray LaMontagne, The Fray, Chris Isaak, Tori Amos, and Shawn Colvin.

Brandi found a new wider audience when ABC's "Grey's Anatomy" showcased three of Brandi's songs -- "Tragedy," "What Can I Say" and "Throw It All Away" -- an unprecedented honor for a new artist. 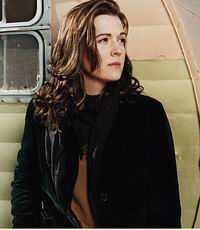