With its smooth brand of doo-wop/hip-hop, Boyz II Men has spearheaded the renaissance of the R&B vocal group, in the process revitalizing Motown Records (the band has become Motown's best-selling act, and its second album, Boyz II Men II, is the label's best-selling album of all time). The Boyz have sold over thirty million albums worldwide as of the first half of 1997, and have managed to capture plenty of awards--not to mention plenty of hearts--along the way.

The Boyz II Men story begins in 1988, at the Creative & Performing Arts High School of hiladelphia, where Shawn Stockman, Wanya Morris, Nate Morris (no relation), and Mike McCary first discovered that the sum of their four voices was definitely greater than the individual parts. Besides singing at school, they honed their harmonizing skills by singing on street corners and on subway platforms, billing themselves as Unique Attraction. Believing that things would start to happen for them professionally if they could just get heard by the right person, they charmed their way backstage at a 1989 show at the Philadelphia Civic Center, where they knew their idol, Michael Bivins (of New Edition and Bel Biv Devoe fame) would be.

When they tracked Bivins down, they
convinced him to listen to their a cappella version of the New Edition song "Can You Stand the Rain." Also present in the impromptu audience were Paula Abdul, Cherrelle, Keith Sweat, and Kid 'n Play. Bivins was definitely impressed by their singing: he gave them his phone number, and after they had pestered him enough, he became their manager and succeeded in negotiating a deal for them with Motown. Bivins suggested that they change their name, and so Unique Attraction became Boyz II
Men, which is the title of a New Edition song off the Heartbreak album. The newly baptized Boyz II Men's debut album, Cooleyhighharmony--named after a 1975 blaxploitation comedy called Cooley High--was released in May of 1991. It didn't take long for the band to conquer the radio airwaves: the first single, "Motownphilly," vaulted up to No. 3 on the Billboard singles chart by July. The
second single, a remake of "It's So Hard To Say Goodbye to Yesterday" (the song originally appeared on the Cooley High soundtrack), hit the No. 2 position in October. To date, the album has sold more than seven million copies in the U.S. alone.

In 1992, just as the excitement over Cooleyhighharmony seemed to be dying down a bit, the soundtrack of the Eddie Murphy movie Boomerang, which featured the Boyz II Men track "End of the Road," was released. The single hovered at No. 1 for a phenomenal thirteen weeks, beating an eleven-week record set by Elvis Presley's "Don't Be Cruel/Hound Dog" single back in 1956. The band's record was broken just a few months later by Whitney Houston, whose sentimental "I Will Always Love You" clinched the top spot for fourteen weeks. But Boyz II Men seemed destined to hold that "most weeks at No. 1" crown: the band tied Houston's record with the single, "I'll Make Love to You," in 1994, and then went on to surpass it the following year with "One Sweet Day," a collaboration
with Mariah Carey that held solid at No. 1 for sixteen weeks.In October of 1993, the Boyz released the Christmas Interpretations album, a collection of both traditional and original Christmas songs. Their version of "Let It Snow" cracked the Top 40 for one week, entering in at No. 32, and the
album itself hit the Top 20. By the time the Boyz released Boyz II Men II in September of 1994, they had become the poster boys for a new era of R&B music.

Their magnificent vocals provided a welcome alternative to the lip-sync trash of Milli Vanilli and the white-boy rap of Vanilla Ice, and their looks and smooth ways made them instant teen idols. Magazines outdid themselves trying to come up with ways to categorize the four singers, and the results were pretty amusing: Wanya was generally portrayed as the hyperactive one; Nate, the
serious one; Shawn, the mellow one; and Mike became known as the Barry White of his generation. But they had already come up with their own stage personas: Mike "Bass" McCary, Wanya "Squirt" Morris, Shawn "Slim" Stockman, and Nate "Alexander Vanderpool" Morris (the moniker belongs to a character from Morris's favorite soap opera).

Boyz II Men II was recorded in a live-in studio called Granny's House, located in the Southwest desert . The band had attempted to record the album at home in Philly, but found that they were too distracted by friends, family, and neighbors to get anything accomplished. The first single from the album, "I'll Make Love to You," was a Babyface collaboration, and it spent fourteen weeks at
No. 1. The second, "On Bended Knee," a Jimmy Jam and Terry Lewis collaboration, immediately followed the first to the top of the chart, where it camped out for six weeks. Once again, the guys were breaking records: charting two songs back-to-back in the No. 1 slot put the Boyz in a very small and select company of artists who have accomplished the same feat--Elvis and the Beatles. The album itself debuted at No. 1 in the States, becoming the first Motown album to do so since Stevie Wonder's 1976 release Songs in the Key of Life. The record sold an amazing six million copies worldwide during its first four months in release, and eventually went on to sell more than eleven million copies in the U.S. alone. Boyz II Men II was followed by The Remix Collection in November of 1995.

The album included an edgy remix of "Vibin'" that featured additional vocals from Treach, Craig Mack, Busta Rhymes, and Method Man; it also included the No. 3-charting "Hey Lover," an LL Cool J song for which the Boyz sang backing vocals. The band's amazing chart success and massive sales numbers were made all the sweeter when it racked up a slew of preeminent music awards, including Grammy, American Music, Soul Train, and NAACP Image honors. Boyz II Men performed before Pope John Paul II during his 1995 American visit, and sang the national anthem at the closing ceremony of the 1996 Olympic Games in Atlanta. In 1996, the band was inducted into the Philadelphia Hall of Fame. Following the release of II, the Boyz took a year-and-a-half break before commencing work on their next album.

Not that they didn't keep plenty busy: all of them bought houses and spent time with their families; they also built their own recording studio, Stone Creek, outside of Philadelphia. Stockman made his solo debut on the soundtrack to Mr. Holland's Opus with the song "Visions of a Sunset." Nate Morris opened a unisex hair salon in Philadelphia called Morris' International Styling. At the urging of their frequent collaborators, Babyface, Jimmy Jam, and Terry Lewis, the Boyz tried their hand at producing on their next album, Evolution, Which hit stores in September of 1997. The band wrote or co-wrote ten of the thirteen tracks on the album, though the first single, "4 Seasons of Loneliness," was written by Jam and Lewis. Three of the tracks--"Come On," "Can't Let Her Go," and "To the Limit"--were co-written and co-produced by the ubiquitous Sean "Puffy" Combs. The Boyz commemorated their pre-fame Unique Attraction days by including an a cappella version of "Can You Stand the Rain," the song that first brought th

em to the attention of Michael Bivins. All that remains to be seen is what records the Boyz will break this time around. 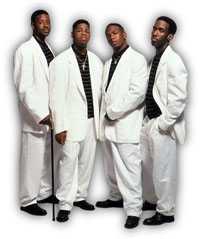