The Bon Jovi story began in Sayreville, New Jersey. Where Jon and his brothers Matt and Tony were raised by they parents Carol and John Bongiovi (Jon later changed his name). By his early teens, Jon was hanging out at local clubs, convinced that one day he would be a rock star.

The area's local music scene was rocking then and there, with the music of rising stars Bruce Springsteen and Southside Johnny and the Asbury Jukes leading the pack. "Just like Seattle is hot right now, 20 years ago it was Asbury Park, New Jersey", Jon told writer Rick Petreycik. "That was so close to my backyard, and when you're 13 or 14, or 15 years old, you can't help but hear about it and have it affect you. When you went down to Asbury Park, what was the crummy boardwalk became Americana. What was splintered wood became sacred ground, and you went, 'Ooh, aah'. And those things romanticized the idea, The myth became the legend, and one thing led to another, and I think blind faith is what got me here." That, and a little help from his friends.

By the time he was 16, Jon was playing clubs. It was not long before he hooked up with keyboardist David Bryan (real name: David Brian Rashbaum), who played with him in a ten-piece rhythm and blues band called Atlantic City Expressway. Jon also performed with bands called The Rest, The Lechers and John Bongiovi and the Wild Ones.

Meanwhile, Richie Sambora was also performing locally with a funk and fusion outfit called Extremes, before hooking up with Alec John Such in the band The Message. After The Message broke up, Alec played with Tico Torres in Phantom's Opera.

The members of Bon Jovi hade crossed paths in these early days, but the current lineup didn't come together until March of 1983 after th first Bon Jovi single, "Runaway," had become a minor hit.

In one of those right place/right time/right person scenarios, Jon managed to get a job sweeping floors at a recording studio through a relative. His second cousin, Tony Bongiovi, was a co-owner of the power station in New York City. Jon had written "Runaway," and in 1980, he recorded a demo of the song at his cousin's studio, with back-up by studio musicians whom Tony had hired, including Frankie La Roca, Tim Pierce, Hugh McDonald and Roy Bittan.

A local radio station included "Runaway" on a compilation tape, and the song started getting some serious airplay. The success of "Runaway" got Jon noticed, and he realized that he'd need more than session players if he wanted to capitalize on his success by touring the New York clubs to support the single.

Jon gave Dave a call, who in turn tapped Alec and Tico. A succession of guitarists (including Dave "The Snake" Sabo, who went on to form Skid Row) followed, until finally Richie signed on, and the band came together as a whole. They began gigging around New York in earnest.

At one show, where they opened for Scandal, the band caught the attention of record exec Derek Shulman, who signed them to PolyGram. "With Jon, I felt he had an unbelievable desire to be a star", recalls Shulman. "he had a burning desire to be huge".

PolyGram toyed with the name, throwing out monikers like "Victor" then "Johnny Lightening", before Shulman anglicized John Bongiovi's name to Bon Jovi.

Their self-titled debut came out January 21, 1984. Filled with the group's now-signature power ballads and hooked-filled tunes underscored by soaring guitar riffs and well-crafted melodies, the album went gold (sales of over 500,000).

The album was a rugged soulful collection of songs about how tough it is being a teenager. Buoeyed by the renewed sucess of "Runaway", and backed by the follow-up single "She Don't Know Me".

Bon Jovi releasead their follow-up album, 7800 Farenheit, in April 1985 wich included the hit singles "Only Lonely" and "Silent Night", it sold equally to its predecesor.

Tours opening for the Scorpions, Kiss and Judas Priest had helped Bon jovi build up a considerable fan base which appreciated the band's anthemic songs and powerful stage presence. Clearly, Bon Jovi was poised on the edge of greatness.

The world ate and slept Bon Jovi, they won the American Music Award and People's Choice Awards as Band Of The Year, MTV gave Bon Jovi a Best Performance Award for the video "Livin' on a Prayer".

Jon was asked what all this astronomical success meant, to which he answered, "Everything is bigger, and it moves twice as fast. You're recognized twice as often. This is bigger, the whole world gets bigger. You have to sell more records, be huger. You get smarter and you understand the business a little more, so it's more responsability. You understand it now, and you want to make sure everything goes right".

Instead of traveling by bus, Bon Jovi went from gig to gig in a luxuriously converted Grumman G-I jet. By the time the Slippery Tour finished in Hawaii on October 17, 1987, the album had sold in excess of 14 million copies, putting it in the same league af astronomical successes as Thriller by Michael Jackson. 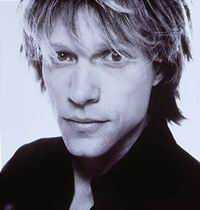