It's the summer of 1999. Thousands of sunburned Finns are bobbing up and down to a funky beat and hypnotic rhymes. It's one of those interminable Nordic nights with no beginning and no end. Just permanently silver streaked sky. Bomfunk MCs are playing a home game at the Ranta Rock festival in Finland, celebrating the runaway success of their debut album 'In Stereo', that blends chemical beats with jungle basses and old skool raps. Rapper Raymond Ebanks ? half Jamaican, half Finnish ? works the crowd ('this one is for the ladies in the house'), while DJ Gismo prefers to do his thing from behind impressive blond dreads and ditto turntables. The syncopating rhythm section and a couple of breakdancing Helsinki homies in pristine white Adidas do the rest. Finland is about to fall for Bomfunk MCs in a very big way.

Nine months later, Bomfunk MCs completely dominate the Emma Awards (Finnish Grammies), where they walk away with the prizes for best newcomer (band), best debut album, best song of the year ('Freestyler') and best producer (JS16). The album 'In Stereo' has sold over 100,000 copies (double platinum) and is just days away from becoming Sony Music Finland's all-time best-selling album. But their success doesn't stop at the Suomi border. The latest single 'Freestyler' has sold an incredible 90,000 copies (triple platinum) in Sweden, which has musically always been Finland's big brother. Sweden is where ambitious musicians send their demos and Sweden is Scandinavia's hip hop hub that dictates style, streetwear and sounds.

Well, two guys with a passion for funk have put a dent in Stockholm's monopoly as Nordic capital of cool. Bomfunk MCs prove that there can be more to Finland than the comic Leningrad Cowboys and folky Värttinä. And with?Freestyler? shooting up the Euro charts it looks like Bomfunk MC?s are one of the country?s latest succesful exports, together with H.I.M., who recently conquered Germany.

Bomfunk MCs are basically Raymond Ebanks and DJ Gismo, backed up on stage by a powerful live band and breakdancers. Ebanks stands for hip hop, while Gismo embraces funk. Producer JS16 throws in some blockrocking beats and the result is a killer mix that pushes onwards where Run DMC vs. Jason Nevins left off. Not surprisingly perhaps, Bomfunk opened up for Run DMC's 1998 show in Helsinki. Born in London and raised in Helsinki, Ebanks has been one of Finland's staunchest promoters of hip hop for the past ten years. Gismo (Ismo Lappalainen) debuted as a techno DJ at the tender age of 15. Since then, he's moved on to soul, funk and hip hop. "When we met three years ago," explains Ebanks, "We knew instantly that we had some chemistry going. He's down with funk, I'm down with old skool rap. We did some tracks with JS16, and here we are now."

Here they are now. 'Freestyler' has brought the streetwise Finns to the top of the Scandinavian and Dutch charts. With heavy airplay and rapid sales, the MCs are already on their way to transcend their homegrown superstar status. They take their vibrant, bouncy live show to Sweden, Norway and Estonia. The mesmerising video, featuring a homeboy in dreads and a MiniDisc player with a mind of its own, is already played in high rotation on MTV. It has also been supported by Germany's VIVA! and Sweden's ZTV while the Dutch TMF station was instrumental in pushing 'Freestyler' to the top of the Dutch singles charts. A promo tour in April and May ? to Holland, Belgium, Germany and possibly other countries - is scheduled to back up their chart success all across the continent. That promo push should definitely drive home the point: these homies from Helsinki are too hot to be kept hidden under the Arctic Circle. 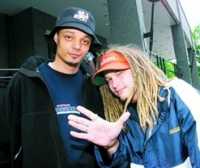