ONE of the wildest vocalists in all of popular music, Bjork Gudmundsdottir (known popularly simply as Bjork) has spent most of her life creating artful, experimental music that defies classification. Those who know her only by her solo career may be surprised to learn that she released albums with three separate bands prior to going it alone in 1993, and in fact this eccentric and original talent has had some measure of fame since she was sixteen.

When Bjork was born in Reykjavik, Iceland, it was not immediately apparent that she would someday become the world's best-known Icelandic musician, if not the country's most identifiable citizen. As a child, she studied flute, piano, and voice, and by 1979, she had joined her first band. At fifteen, she formed the group Tappi Tikarass, a post-punk outfit influenced strongly by Siouxsie and the Banshees. In 1982, two of the band's songs were included in a documentary on the Icelandic New Wave called Rock in Reykjavik, and as a result, Bjork was soon recognized as one of the area's most promising new talents.

In 1983, Bjork and other stars of the Icelandic New Wave were invited to join together as a sort of supergroup for a special radio program. She and several of the other members ?among them, Einar Orn and Sigtryggur Baldursson ?got along rather well, and by the fall of that year, they had formed a new band, Kukl. By the time Tappi Tikarass's second and final album came out late in 1983, Kukl had become Bjork's main creative outlet. Over the next two years, she and the band put out two albums, toured Europe, and began to develop a jazzy, political post-punk sound. But by mid-1986, Kukl was finished.

Bjork and her husband, guitarist Thor Eldon, had a son, Sindri, born June 8, 1986, and on the same day a new band was founded, featuring the two happy parents, plus several former Kukl members. By the end of the year, they had finalized the group's name: Sykurmolarnir, or, in English, the Sugarcubes. The success of the Icelandic version of the group's dreamy and remarkable first single, "Birthday," in 1987, led to them signing a record deal with Elektra. In spring of 1988, their debut album, Life's Too Good, was released in America to glowing reviews. Besides "Birthday," the jangly, somewhat puzzling "Motorcrash" also received a good bit of airplay. A second CD, Here Today Tomorrow Next Week, didn't fare as well, however. In 1990, Bjork took some time out to record Gling Glo, an album of traditional Icelandic jazz tunes.

Though the Sugarcubes' third album, 1992's Stick Around for Joy, generated the aptly titled single, "Hit," the band broke up later that year. By that time, most of the Sugarcubes' notoriety focused around Bjork anyway; her departure to begin a solo career made sense. The Sugarcubes' swan song, It's It, was released late in 1992; an album of re-mixes, it presaged Bjork's solo work with dance re-mixes.

Having split up with Thor, Bjork and her son moved to London in 1993. The move allowed her to work with producers in the British dance music scene, and it was one of the finest, Nellee Hooper, who helmed Bjork's first solo album, Debut. Highlighted by a tremendous single, the timpani-and-sampled-guitar-fueled "Human Behaviour," Debut received wildly varying reviews, getting trashed by Rolling Stone but lauded by many others. The numbers tell the real story: sales figures for Debut finally established Bjork as a star in America.

In 1995, Bjork followed up with the more melancholy Post. It didn't make the same kind of sales impact as Debut, despite the hugely entertaining, Busby Berkeley-ish video for "Blow a Fuse (It's Oh So Quiet)," a Bjork-does-big-band-jazz extravaganza. Early 1997 saw the release of Telegram, in which nearly every track from Post was either re-mixed or re-recorded by collaborators ranging from Dillinja to Deodato to the Brodsky Quartet. Where Bjork goes from here is anyone's guess. She recently conducted a radio interview with Karlheinz Stockhausen, the classical electronic-music pioneer. Will she next create some sort of experimental ambient recording? A new twist on modern dance music? Either way, it's likely to be another bold step along her utterly unique musical path. 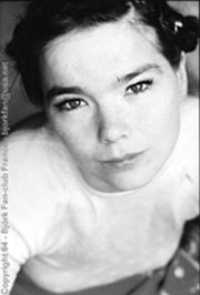