"There isn't one song that was forced on us or that doesn't belong," says an elated Billy Ray Cyrus of his debut Monument Records album Southern Rain. "This is a body of work that I'm very proud of."

Those words of conviction ring from a man who has been at the top of the mountain, the bottom of the valley and is now on his way back up with an unbridled enthusiasm for his craft, his career, his new record label . . . and his life. "I'm more excited now than when I got my first record deal," said Cyrus. "Only now I'm older, more focused; I'm having more fun."

The fall of 1999 saw Cyrus at a crossroads. He knew the relationship with his record label was coming to an end, and he knew that would mean leaving many people he had come to know, love and trust - a security blanket of sorts, even though the threads had worn thin. "I was really depressed at that time," he comments. "I was sitting in my back yard and the rain was
falling. In that instant my life flashed before me and I wrote the song, 'Southern Rain."

That cut became the catalyst for Cyrus's relationship with what would be his new record label. A Sony A&R rep caught one of Cyrus's concerts, heard the demo for "Southern Rain" and made a prediction that the song would be the title track to his next album. The wheels started turning to a destination that would eventually land him on Sony Music's reactivated Monument Records label.

"I knew Monument would be my home for Southern Rain," said Cyrus about the first meeting with Sony Music. "Not only is the label also home to the Dixie Chicks, but there's also a great history with Monument that I was excited and honored to be a part of."

Indeed, the label boasted a rich heritage through the 1970s with artists like Dolly Parton, Roy Orbison, Willie Nelson, Kris Kristofferson, Billy Joe Shaver and others. Sony Music reactivated Monument in 1996, and the imprint is now back on top making history with a diverse and talented roster of artists. With his own history and an abiding passion to make great music, Billy Ray Cyrus is a perfect fit for carrying on the Monument legacy.

Produced by Dann Huff (Faith Hill, Lonestar) and Blake Chancey (Dixie Chicks), Southern Rain embodies Cyrus's musical roots, with influences from country to folk to retro rock to R&B to rockabilly to pop. The first single, "You Won't Be Lonely Now," is a lilting ballad that showcases Billy Ray's gently yet emotive vocals. The other cuts exhibit Cyrus' diversity, from the country folk of "Southern Rain," the title cut to the chugging rockabilly of "Hey Elvis" and "Burn Down The Trailer Park," to the beautiful balladry of "Everywhere I Wanna Be," "Love You Back" and the co-written "Without You."

To keep the feel of Southern Rain running as a common thread through the overall project, he chose to do his photo shoot in Savannah, Georgia, a classic southern town not just in location, but in mood and vibe. He also traveled to Jeckyll Island, just south of Savannah to shoot the music video for "You Won't Be Lonely Now."

Southern Rain invigorated Cyrus and returned him to the reason he made music in the first place.

"Music is not a job, it's what I love to do." He says. "My goal is for my music to touch people's lives. I want them to feel they were moved inside."

Judging by the legions of fans who buzz on web chats, travel to concerts and have purchased millions upon millions of his albums, he has certainly accomplished that goal. In 1992, his debut album Some Gave All sold over nine million copies and spawned the monster international hit "Achy Breaky Heart". One three-minute song expanded the boundaries of country and brought the music to an entirely new audience.

"I'm proud of that song," Cyrus says. "It touched people around the world."

The title cut, "Some Gave All," a heartfelt tribute to Vietnam Veterans, continues to impact former soldiers throughout the country. "I still get letters for veterans and their families who feel that song speaks for them," he says. "Their cards, letters and personal feelings to this day show me that, through my music, I can impact people in a positive way."

His impressive career resume also includes the million-selling It Won't Be The Last, three number-one and many top-ten singles including 1999s "Busy Man" which still receives strong recurrent airplay.

Over the years Cyrus has maintained his worldwide success, earning multi-platinum certifications in Australia, platinum in Denmark, New Zealand and Norway and gold in the UK and South Africa as well as a Diamond Award in Canada.

His mantle is covered with awards and accolades from various organizations, but the ones he's most proud of aren't connected to his music. In 1999, he received the International Entertainment Buyer Association's "Humanitarian of the Year" for his tireless philanthropic work. His charitable efforts have been recognized by the Country Radio Broadcasters, who honored him with their Artist Humanitarian Award, and by the Kennedy Center Honors, who recognized him for his work with children. He also received the first ever Bob Hope Congressional Medal of Honor Society Entertainer's Award for his dedication to philanthropy.

Recently Cyrus has taken his career in new and interesting directions. He stars in a PAX-TV movie, "Doc," playing a Montana doctor who moves to New York City. In addition, he is the music advisor and has a cameo in the New Line Cinemas feature film, "Wish You Were Dead," starring Christopher Lloyd and Carey Elwes. Cyrus's songs "Where'm I Gonna Live" and "Good As Gone" are featured in the film. Plus he appears in "Mulholland Drive," a TV movie directed by David Lynch, and he also stars in the action film, "Radical Jack."

Out of the limelight, Cyrus retreats to his 500-acre farm outside Nashville where he enjoys time with his wife Tish and six children.

In 1996, Cyrus reached a turning point in his career when he recorded the critically acclaimed album Trail of Tears. The CD and its title song were an epiphany for him. "It gave me something I never had before, he recalls. "It's the foundation for who I am now."

Now, four years later, the creative process he established on Trail of Tears is continuing with the release of Southern Rain. It's a collection of songs that represents a long and eventful journey; a journey filled with personal and professional highs and lows, love, loss . . . life.

"I wanted this album to be complete," says Billy Ray. "I wanted each piece to fit and every song to have a part to play. I wanted the music to be real again. Southern Rain is everything I am and always will be." 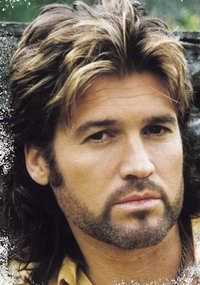