Most of you will probably know that our ‘Great American Rocker ‘ is originally from England. He was born William Michael Albert Broad on Nov 30th 1955, in Stanmore, Middx. When he was just 3 years old, his father moved the family to the USA, in the hope of what Billy describes as ‘finding the American dream’. They settled in Long Island, New York, but after about 4 years, Mr. Broad decided that perhaps it wasn’t the ‘promised land’ after all & they returned to the UK. After spending a short time in Bromley, Kent, the Broads moved to the quiet suburbia of Goring, Worthing in W.Sussex. And then returned once again to Bromley.

Billy insists that he inherited his wild streak from his father & grandfather before him. Wherever it emerged from, I think there can be no denying that it exists ! He claims also that he has frequently been misunderstood throughout his career & I believe that this was the case even during his school days. It was suggested on Billy’s report card that he was ‘idle’. What the teachers failed to recognise is that Billy was just ‘bored’.

There was never any question that Billy was indeed a very bright student, but his need for constant stimulation & possibly an over powering compulsion to reject conformity lead to him leaving Sussex University after just the first year. Billy had already realised his appreciation of music & was seriously contemplating following that path as his chosen career. As he says himself : " I never wanted no proper job " The fact that his father was so avidly adverse to it was all the prompting that Billy needed. It was not just a question of deliberately wanting to rebel against him, but eventually more a case of wanting to prove that what he had chosen was not worthless. After many huge rows & 2 years of not even speaking, Billy managed to convince his father of this & Mr. Broad is now one of the first to recognise his achievements.

One of the most admiral points of Billy’s career is that he has always resisted the temptation to ‘jump on the band wagon’. It would have been so easy , as he says, to ‘brush his hair down & become the new David Cassidy ‘. But his resilience, determination & commitment to his beliefs prevented him from ‘selling out’ & gave him the strength of position that he still commands today.

Billy became involved with a group of like-minded friends, whom became known as The Bromley Contingent, formed around 1975. They were huge followers of the Sex Pistols & the punk movement in general. He had a dabble even then at writing his own songs, along with another of the members, known then as Susan Dallion. She was later to go on to bigger things & became Siouxsie Sioux with the Banshees.

It was not long, however, before Billy decided to form his own band, Chelsea. He joined up with bassist Tony James, Mick Jones (later of The Clash ) & Brian James (later of The Damned). John Towe was recruited for the drums, Billy settled for playing guitar, whilst (Love & kisses) Gene October completed the band as singer. Chelsea performed live together for the first time in October 1976 & by the end of the year, Generation X was in the making.

Billy , Tony & John decided to break away & form a new band, the name, Generation X, is taken from a 1960’s paperback. The theme of which is significantly related to such topics as sex, drugs & rock ‘n’ roll. Billy recognised his more fitting position as singer & ‘lead’ & Bob ‘Deerwood’ Andrews completed the line- up on guitar.

It will always remain an open thought, what would have happened if the explosion of ‘punk’ had not erupted at this time. But it did however & it was this that captured the imagination, soul & spirit of our man. It was refreshingly ‘new’ & ‘different’ & Billy could relate to it completely. Generation X had it’s degree of success, but did not escape the condemnation of the critics. It was not that however that brought about it’s demise , which was to come around the end of 1980 , after just 3 albums. Management problems, unrest within the band & an increasing disillusionment by Billy were ultimately the cause of that & in 1981, Billy packed up his leathers & flew out to New York to persue his career in a solo capacity. It was here of course that he met up with the great Steve Stevens & Sir William was back in business.

It was not to be an easy ride, however & problems both personal & professional have dogged him most of the way.

They have never fased him for long however & through out it all, he has never fallen from his devotion. He has always managed to produce the goods & they have always been goods well worth waiting for.

This I believe, is why Billy remains so high in the regard of so many devoted fans throughout the world, both male & female, young & old. 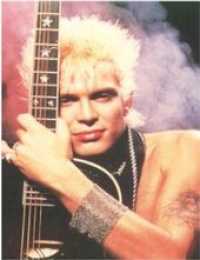