Now, after a long journey of self-discovery, both in terms of her life as well as her music, Hart makes her blazing return with "SCREAMIN' FOR MY SUPPER," a soulful, adventurous collection of all-new songs. Springing to the surface is Hart's raw, sensual nature, captured in the album's evocative sound and remarkably confident lyricism.

"I'm not nervous anymore," Beth says proudly. "All I could see when I first got signed was, 'Oh, my Gosh. The dream is coming true.' And then I realized that that was just the beginning." * * * * *

Beth Hart began her musical life at age four, when she took up the piano. As she grew up, her tastes moved from Beethoven and Bach, to Led Zeppelin and Rush, to Aretha Franklin and James Brown, to Otis Redding, Billie Holiday and Etta James. As her creative vision began to take shape, she entered L.A.'s High School for the Performing Arts in 10th grade as a vocal and cello major. At the prompting of a classmate, she soon began singing during open mic nights in the Belly Room of the Comedy Store. Before long, Beth was appearing on club stages five nights a week, entering talent contests as a solo act at a number of clubs in the South Central area, often eliciting enough applause to take home the $100 grand prize. Alas, staying out to all hours on school nights eventually marred her attendance record to the point where she was asked to leave. After a brief and fruitless flirtation with real estate school, she waved off academics to focus entirely on music.

By the summer of '93, Beth had enlisted a loose-knit band and expanded her territory to include clubs in the greater L.A. area - the Roxy, Troubadour, Club Lingerie. It was on the L.A. circuit that she met her future collaborator, bassist Tal Herzberg. During his mandatory service in the Israeli army, the Tel Aviv-born Tal was assigned to the 17-piece Air Force Orchestra. Within two years of finishing his military service, he had become the most-recorded bassist in Israel, contributing to over 60 albums. With that experience under his belt, he moved to the United States in 1992 and soon developed a reputation as a top session player.

The newly-formed group opted against a potentially-futile life on the L.A. club scene. Six nights a week, they'd defiantly roll out a carpet on Santa Monica's carnival-like Third Street Promenade, light some candles and just play. No guest lists. No soundcheck. No club owners. Just atmosphere and a lucky crowd of people.

The buzz soon brought Beth to attention of 143 Records, who promptly inked the talented young singer/songwriter. The Beth Hart Band cut their 143/Lava/Atlantic debut, "IMMORTAL," with celebrated producers Hugh Padgham (Phil Collins), Mike Clink (Guns N' Roses), and 143 founder David Foster. 1995 found the band on a grueling nine month tour which saw them not only performing across the United States, but also at Lollapalooza, opening for the Scorpions in Germany, and gigging at clubs in Denmark and South Africa.

Unfortunately, the pressures of the road took their toll on the Beth Hart Band, who essentially disbanded upon returning home. Beth decided to drop out of sight for a bit by relocating to Birmingham, Alabama. Beth had made friends there during the tour, and felt it a perfect spot to settle in and focus on her songwriting.

"It was our first time on the road, the band was fighting and I was way too neurotic about stuff," Beth recalls. "When it was over I was like, 'I don't want to go home.' And Birmingham was a good place to separate from the real world."

After five months, Beth returned to Los Angeles, where she began work on what would become "SCREAMIN' FOR MY SUPPER." She teamed with producer Oliver Lieber (The Corrs) on a number of tracks, including "Delicious Surprise" and "L.A. Song (Out Of This Town)."

"Ollie did a great job," says Hart. "He worked his ass off and we definitely clicked. But I also really wanted to produce some of this record, too. I thought maybe I could go in there and add something raw, something that came from inside of me."

With that in mind, Beth again hooked up with Herzberg, whose studio experience would prove invaluable. They booked time at "a cool down-home studio called Sound Chamber in North Hollywood," re-recruited guitarist Jimmy Khoury and new drummer Rocco Bidlovski, and soon got down to the business of cutting a new Beth Hart album.

"We both went in with the idea that we were going to listen to each other," notes Beth, who ended up co-producing eleven tracks with Tal. "This wasn't about us being brilliant producers, because we ain't. It was about going in and just letting it fly."

Knowing just how important good vibes would be to the project, Hart and Herzberg turned the three-month recording process into a freewheeling, spirited session.

"We made the studio into a party," Beth says. "We decked it out with flowers and candles and all these incredible rugs, brought in tons of wine. It was so much fun."

As she was asserting herself in the studio, Beth was also stretching her songwriting muscles by collaborating with a variety of top tunesmiths: Lanny Cordola, the L.A.-based team of Gregg Sutton and Bob Thiele, and New Jersey's own Glen Burtnick (best known for Patti Smyth and Don Henley's #1 smash, "Sometimes Love Just Ain't Enough").

"I really learned a lot from them," Beth says. "I'd only written with Jimmy, or with the band, or by myself. I'd never worked with people that were just 'songwriters.' It was scary, but at the same time I said to myself, 'Beth, you're not here to prove anything. You're here to learn.' And it turned out great."

Still, two of the most powerful and provocative tracks on "SCREAMIN' FOR MY SUPPER" come from Beth and Beth alone. She indulges her blues roots and sends a message of love to her mother with the jazz-inflected "Mama," while the poignant "L.A. Song (Out Of This Town)" is the semi-autobiographical tale of how a relationship gone sour gave Beth the courage to find the strength to put her life on the right track.

"I realized that the good life I was dreaming of was not going to be in Alabama or South Africa or wherever," she says. "It's got to come from the inside. And that's when I decided to go back to L.A. and figure out my stuff. I started to take a little bit better care of myself and focus on the fact that I'm lucky to get to do this." Upon finishing the album, Beth became involved with director Richard Donner's projected Janis Joplin biopic, but decided the movies weren't the right venue for her spontaneous artistic nature. Nevertheless, when she was invited to audition for Love, Janis - a stage musical based on the late, great Joplin's songs and letters -- she jumped at the opportunity.

"I've always wanted to do stage, ever since I was little kid," Beth says. "And I thought I could probably learn some great stuff. So I auditioned for Janis' sister, Laura, and the director, Randall Mylar. The show is great because every single word of the show is by Janis. Nothing is written by anyone else. It's all her interviews and all her letters to her family. I do some acting and sing all the songs, and another girl does all the letters. It's been great. We've been getting standing ovations every performance."

To get in shape for Love, Janis, Beth worked with a vocal coach and honed her voice by stepping to the stage on open mic nights at the Baked Potato, a dark and smoke-filled L.A. nightspot.

"I go over there, I'll do some old blues or soul stuff, which I love," says Beth. "I did years and years playing the chitlin' circuit in South Central. It was all blues and Aretha and Etta James. For me, the best stuff to sing and play comes more from a bluesier, sweatier, stinkier place. I love that stuff. That's the music for me. Music that makes people feel something that inside their gut, that just makes them go 'I want to cry to that' or 'I want to fuck to that.'"

Hart's performance in Love, Janis has received universal acclaim, and plans are currently in the works to follow the show's successful run at the Cleveland Play House with a touring production. In the meanwhile, Beth is focusing all of her considerable energies on the passionate, personal songs of "SCREAMIN' FOR MY SUPPER."

"I feel so excited about this record," Beth Hart says. " The most important thing I learned over these years is that it can't be about money. If it's about money, go get a job. It has to be about the music." 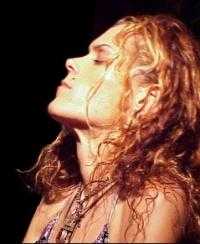