THE BETA BAND
Heroes To Zeros

After a long journey of distillation from song concept through the final mixes, the self-produced third album from the Beta Band has arrived. Patience pays off: Heroes to Zeros is as true on record as it sounds in the imagination of band members Stephen Mason, Robin Jones, Rich Greentree and John Maclean.

Inspired by the reverent response received during their shows, the band set out to capture the intangible live element and marry it with the ritualistic digital process.

"We always felt our songs grew enormously after a few months playing them on tour, so we tried to get that ignition happening in the studio by recording huge parts of the record live", says bassist Rich Greentree.

After two albums, three EPs, four singles, and a world tour, including supporting Radiohead in the States, the time felt right for the band to take producing honours and evolve from the "collaborative co-productions" of their previous catalogue. They did -- and it worked.

The 12 final tracks had 18 months to breathe and develop in pre-production and test recording sessions before a final seven week, no-holds-barred record and mix at Rockfield Studios in Wales. To achieve the highest fidelity from the results, they enlisted the services of Nigel Godrich (Radiohead, Beck) for a final mix at London's Mayfair Studios. He was impressed by their efforts, they were pleased with his refinements.

With topical global issues of terrorism, war, and governmental mediocrity weighing on his mind, guitarist/vocalist Steve Mason wanted to make the songs on Heroes To Zeros more aggressive.

"We've been known in the past as some hippie/stoner/folk kind of band. That’s not how we are at all," claims Mason.

"Assessment", the first single off the album, features duelling guitars and blaring brass and is the most loud, full-on rock they've ever recorded. The band-directed video, shot in the South East corner of England on the dunes of Camber Sands, fuels the Beta Band revolution and portrays "the history of human warfare".

Other songs include "Out-Side", a tribal drum throw down featuring dogs barking, seagulls squawking and trains chuffing. "Easy's" got the funk, "Rhododendron" is a beautiful instrumental. The organ-led and mantric "Space Beatle" welcomes us to the church of Beta and the thrashy, phased "Painted Bird" will be worshipped live.

As for their performances, the Beta Band is renowned for their insistence on making their shows more than just gigs. On stage the band orchestrates theme nights, wears elaborate costumes and provides intense visuals including homemade films filling the backdrop.

With its magic of no formula gorging on self-belief, between July 1997 and July 1998 the Beta Band released three EPs met with widespread critical acclaim. They were later compiled into a 12-track compilation aptly named "The 3 E.P.'s", which also had a walk-on role in the silver screen version of "High Fidelity".

For their self-titled debut in June 1999, the band once again took their no formula approach: some songs on paper, some broken clocks and a feeding trough into the church of the first album. Even they were baffled with the results.

The second album, 2001's Hot Shots II, had a more electronic flavour merged with more concise songs and, according to Greentree, even a "thread of coherence".

With two DVDs planned --the making of the album and accompanying short films for the 12 tracks-- we'll get to see, as well as hear, what the Beta Band is on about.

"Heroes to Zeros represents a true marriage of samples, programmed beats and a live band. This is something we've been working towards since the beginning. We've carried on trying to hone our sound down to a pop song and are learning to make it tighter and more exciting," reveals Mason.

As producers, the foursome are now the proud fathers of a monster only they could have created. Pop-honed and spiritually uplifting; guitars, samples and aggression; live magic and digital sorcery; dogs, gulls and flowers… it could only be the Beta Band. 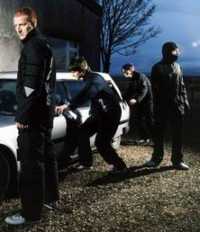