Youve been trained as a classical musician. You study Jazz in school. you form a bluegrass band. Next up: you discover country music, fall in love with the sound and decide that's what you want to do with your life. The next logical step is to move to Nashville and try to get a record deal.

That sounds straightforward enough. But for the members of Bering Strait "the move" was more than a highway trip with their instruments in the back of a van. This stunningly talented seven-member ensemble traveled with their dream to Music City from Russia. And it is a testiment to their prowess that they have indeed landed a major label recording contract.

"When the iron curtain fell, there was a really big interest in America and with everything connected to America," recalls Ilya Toshinsky. "I went to see the The Nitty Gritty Dirt Band when they came to Moscow. I listened to every Earl Scruggs record I could find. In the late '80's and '90's, there was a whole movement in Russia that made you excited about country music." Ilya plays banjo and electric lead guitar in Bering Strait.

"My dad traveled a lot, and he brought me some recordings of Waylon Jennings," recalls Natasha Borzilova, the group's lead vocalist and acoustic guitarist. "Then I got some of Juice Newton's. I had all of Reba McEntire's records and was a huge fan of hers. Some of the others in the group learned from Alan Jackson's records and Garth Brooks's concert videos. We never really had a group meeting about it. It was just spontaneous that we all wanted to come to America."

Both Ilya and Natasha were child prodigies, proficient on their instruments before they reached their teens. They were also the children of nuclear scientists. Sasha Ostrovsky, the group's steel guitarist and dobro player, hails from a scientific family as well. So does Lydia Salnikova, the keyboardist virtuoso in Bering Strait. They were all raised in Obninsk, a community 60 miles from Moscow, known as "the first nuclear city in the world." Natsasha's father died as a result of radiation poisoning after leading the investigative team to Chernobyl when its reactor exploded in the Ukraine in 1986.

"Obninsk is a small city with the population of 110,000," says Natasha. "It's a scientific town, so people work a lot together and know each other. And since our city is all about nuclear power, we have a lot of international conventions there. That gave us lots of chances to play for people."

Ilya, Natasha, mandolinist/fiddler Sergei Passov and Dobro Player Sasha Ostrovsky created the nucleus of Bering Strait between 1988 and 1994. All four were recruited by a guitar teacher who believed that learning to play bluegrass would help them in their classical music studies. Ilya was only 11 when he joined in 1988. Natasha was 11 when she joined a year later. Sergei was just 10 when he came on board in 1991. Dobro player Sasha joined in 1994 at age 13.

"Our teacher wanted us to inprove our classical playing, so he thought this band would help." "Because bluegrass is hard music to play. It takes a lot of technical skill, so we had to practice a lot to make it work. Besides, the music is awesome.

"It was cheerful music, and we were little children playing happy songs," adds Natasha. "It was like a freedom break for us." The young musicians' interest in American music coincided with the breaking up of the U.S.S.R. into 15 republics in 1991 and Russia's subsequent move away from Communism toward democracy and free enterprise. Travel was one of the many things that became less restricted.

In 1992 Ilya came to the United States to attend the Tennessee Banjo Institute in Lebanon, a town just east of Nashville. He remembers seeing jazz-banjo virtuoso Bela Fleck there, which fired his imagination. He communicated his enthusiasm to others. Performing at the time as Cheerful Diligence, the group traveled to Oak Ridge, TN on a cultural exchange program in 1993. Oak Ridge is the nuclear "sister city" of Obninsk. A year later the band came to Kentucky for the International Bluegrass Music Association's convention. IBMA put the young group on it's awards show to perform "Rocky Top."

"We met so many people and they were so encouraging," Ilya reports. "We'd been playing bluegrass music for five years in a mexican restaraunt in Moscow. American people who hung out there had been talking to us. They were saying, "you ought to get a pedal steel guitar, play the electric guitar, come to America, listen to the radio and see what's going on." So we did."

By this time some of the band's founders were studying jazz in college and expanding their musical horizons. Sasha took up the steel guitar. Ilya began emphasizing his electric guitar skills. To add keyboards to the sound as well as a high harmony voice to compliment Natasha's leads, the quartet approached Lydia Salnikova in 1995. Drummer Alexander Arzamastev had performed with the group during its infancy in the late 1980's and was added permanently to the lineup in 2000. He also plays the traditional Russian folk instrument the balalaika.

Concert trips to Poland, the Netherlands and Belgium strengthened the band's confidence and abilities. Five years ago, Bering Strait decided to make a concerted effort to make waves in the U.S.. A series of trips to Nashville led to a number of record label showcases in 1996.

"They didn't like us," Natasha says forthrightly. "We weren't as good a band as we are now. We weren't as tight. My accent was too heavy. Our choice of material wasn't the best. Plus, we were then calling ourselves Siberian Heatwave, the most stupid name you could ever find."

"When we started playing country music, we didn't have a clue what it should sound like," muses Ilya. "We were just experimenting. Soon, we started finding our own style. Then a name."

While recording their debut album the members tossed around dozens of monikers. They eventually settled on Bering Strait. Spelled another way, the name could be "Bering Straight," a reference to the act's forward momentum and musical integrity. The geographical Bering Strait is the body of water seperating Siberia and Alaska. And then there's George Strait and the Dire Straits, both of whom are idols to the russian youngsters.

Producer Brent Maher has become a believer. So has manager Mike Kinnamon, who later put together a management partnership with well-known record executive Tim DuBois. The Grand Ole Opry invited the group to guest on August 4, 2000. Little by little, other in the industry recognized the amazing talents from Russia, including famed producer and A and R Scout Tony Brown, who signed the group in 2001 to a recording contract.

"This group's potential is limitless," states manager Kinnamon. "They can do everything from Beethoven to rock,"

"I can't tell you how excited I am about this band," says producer Maher. "If everything happens like I feel in my heart it's going to, what a positive impact Bering Strait could be on Nashville and on country music-- New doors knocked wide open."

An independant film crew has been chronicling the amazing story of this one-of-a-kind group. The independant feature length film titled The ballad of Bering Strait, will be released in 2002, (directed by award winning filmmaker Nina Gilden Seavey). It's a striking saga, to be sure, and one that has never been told before. But at the end of the day, it will be the music that will tell the tale. On that front, the Bering Strait members are ready and eager to prove themselves,

"We've been together for 13 years," observes Natasha. "Im a little tired of waiting, I'm ready to really go to work."

I'm in it for the love of the music," says Ilya. "I hope we play music together for 20 years to come." 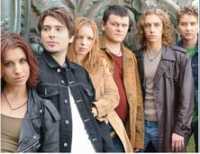