Behind Crimson Eyes are...

Forming in January 2004, Behind Crimson Eyes have leapt into the limelight with their unique take on the pop punk genre. One of the first bands. In Australia to play ‘emocore’ style of music, made popular by such bands as Taking Back Sunday, Finch and The Used, Behind Crimson Eyes have risen to prominence through hard work and a lot of talent. With little more than a three track demo and a D.I.Y ethic, the boys have managed to support such great international bands as New Found Glory, MxPx, Midtown, Pulley and Alexisonfire, as well as playing shows in three states with a wide range of Australian groups, including 28 Days, Bodyjar, Gyroscope, Blueline Medic, Parkway Drive, One Dollar Short, The Hot Lies, Something With Numbers and Area 7. In addition to this, the band reached number 2 on the overall MP3.com.au charts, and number 1 for both Alternative and Rock charts for the month of October, November, December, January and early February. This has all happened through Behind Crimson Eyes’ own efforts, which include designing and maintaining their website, promoting and booking shows, giving away of demos in the thousands for free and designing and producing their own merchandise.

The band’s music says it all. Luscious guitar melodies combine with driving rhythms, and vocal harmony juxtaposes against vocalist Josh’s brutal screams. All in all, a unique but brilliant combination. The band quotes a wide range of bands as influences, everything from Story Of The Year and Matchbook Romance to From Autumn To Ashes. While their recorded work is impressive to say the least, it is the Behind Crimson Eyes live show that truly sets them ahead of the field. With energy from start to finish, the band gives their all every time they step out on stage. Not afraid of the limelight, the guys also happily mingle with fans, providing a wholly fulfilling live experience. With their Debut EP scheduled for release in March 2005, Behind Crimson Eyes is set to take Australia by storm. 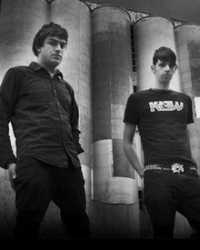