"Art & Life is about the way an artist paints a picture - but a picture also paints an artist," explains Beenie Man. "It's about the inner man and the outer man."

"Since I was a little kid, I've been in dancehall and listening to reggae and Beenie Man is one of my favorites," says Wyclef. "We're always working together because our chemistry works so well." Art & Life is a muscular and sophisticated collection featuring guests like Wyclef and ghetto diva, Maia, who croons on "Girls Them Sugar," a deft take on "Who Am I?," the track that brought Beenie Man, born Moses Davis, to international attention in 1997.

Always present and correct are his signature rough rhythm riding skills that have made Beenie Man a star since he turned out ghetto talent contests as a young man. Beenie Man's spontaneous, rapid-fire toasting and singing skills are endlessly inventive and commanding. His catchphrases - "Zim Zimma, who's got the keys to my Bimmer" from "Who Am I?" among countless others - have made him a folk hero everywhere they care about dance music.

Describing his gift, Beenie Man says, "I'm a word garden. I build words, make words. Words are always in my head. All I need is a beat and that's it. I have a dictionary in my head, the beats create a melody and once you find the melody, that's the song." Contradicting his name, which means "shortie," the long, lean and lanky Beenie Man, with his melting eyes, is dubbed 'De gal dem sugar,' in tribute to his magnetic power over female fans.

Lovers of Beenie Man's raunchy lyrics will flock to his vivid self-advertisements for popularity and athletic sexuality on "Analyze This" and "Ola." Yet in some respects, the soul of Art & Life is "Jamaica Way," a lyrical hymn of praise to his island and its musical heroes, while its heart is "Ain't Nobody," a strutting mission statement of self-determination. "What I do in the States is what Beenie Man does in Jamaica," says Wyclef. "He takes everything and puts it together and comes up with a sound that, even though it's dancehall, you can still hear a little bit of rock, a little bit of reggae harmony singing, opera … a whole bunch of things."

"You have to get everyone involved in your music," Beenie Man explains. "You can't be an artist stuck in Jamaica, America or England; you have to be a universal artist. I'm a fan of all music."

Known for his eclectic assemblages on Art & Life, songs like "The Tumble," with its Latin dancehall beat will send a charge right through from Trinidad's "Port of Spain to Portland, Maine," as Beenie Man sings.

Flavor enhancement comes from the great Cuban trumpeter, Arturo Sandoval, and Beenie Man's combo of English singing and rapping in Spanish. Beenie Man utilizes the tracks of Art & Life in weaving his own tapestry. "Love Me Now" flows into the Civil Rights anthem, "We Shall Overcome." He interlaces lands and legends on "I've Got A Date," which mixes the Staples Singers' "I'll Take You There" bassline with the Alton Ellis rock steady classic of the title, a favorite of Beenie Man's mother when he was a child.

Music surrounded the young Beenie Man. With his mother and many siblings, he lived in a government 'tenement' yard in the Waterhouse area of Jamaica, where regular rasta nyabinghi drum and chant sessions attracted the neighborhood's many musicians, including Black Uhuru, and the Wailers' Peter Tosh, Bunny Wailers and Bob Marley.

Improvising at a local talent contest at age six, Beenie Man was spotted by the controller of the Shocking Vibes label, Patrick Roberts. "He was talent itself," Roberts recalls.

Beenie Man remembers that night. "I won the concert out of about fifty artists. I never lost a DJ contest. I have to go to school and my mother don't have no money. I would win $25 JA and two boxes of beer for a contest; the beer was my shoes and school uniform money, the $25 JA was my lunch money. I had to win."

Football (or as we in America call it - soccer) and music are traditional escape routes from the ghetto. Indeed, Beenie Man was selected to attend many schools because of his strength at football. But a broken foot made him realize, "Music is my only hope."

Much time was spent at King Tubby's Studio with the engineer, Jammys, who would let the gifted youth sing a track and then give him a cassette to play for his friends. Then, during a temporary split with Roberts, Beenie Man cut "The Invisible Beenie Man, Ten Year Boy Wonder" with producer Bunny "Striker" Lee. It became a global reggae hit, though Beenie Man's rewards were in experience, rather than finance.

Pursuing his dream, Beenie Man often had it rough. He slept on streets and beaches and went hungry. Escaping the rigors of Jamaican ghetto life, Beenie Man traveled to England, America and then Canada, where Roberts tracked him down and insisted he come home to make music. "I sat there for three years and nothing happened," Beenie Man recalls ruefully.

Ultimately, collaborations with the production team of Sly and Robbie and artists like Luciano and Barrington Levy propelled Beenie Man on until he was voted Jamaica's DJ of the year in 1994, a position he has since maintained. In that same year, a collection of remakes of Beenie Man's local hit, "Blessed," was released in a short-lived deal with Island.

But it was 1997's autobiographical The Many Moods of Moses album, boldly mixing dancehall with Zulu Harmonies, that broke Beenie Man big internationally. "Who Am I?" charted R&B as well as topping reggae charts for weeks. Its country track, "Ain't Gonna Figure It Yet," even became a hit in Nashville. Now, with the powerful production of Art & Life, Beenie Man has achieved a compelling synthesis that will ignite listeners everywhere. Concludes Beenie Man, "I'm an entertainer who entertains all people. I do standup comedy, I act (he starred in the Jamaican hit, "Dancehall Queen"). I do everything.

On Art & Life, you not only see me alone, you see the world through me, like I am your guide. "It's a fullness that we reached." 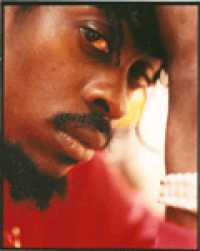