To put it all in context, this is the way the bullshit went down.

Our first gig was in John Berry's loft on 100th Street and Broadway, at a party for Adam Yauch's 17th birthday in August of 1981 (it was also in John's loft that we recorded the oldest of the old bullshit -- the previously unreleased, 4 track-cassete versions of "Egg Raid on Mojo" and "Transit Cop.") Yauch played bass, Kate Schelledbach played drums, John played guitar and I (Micheal Diamond) sang. At the party our friend Dave Parsons was talking about starting a record label and asked us to record. Needless to say we were phsyced. Prior to this, John, Kate and I were in a band called The Young Aborigines (and I had played drums while Kate Played percussion). Anyway, Yauch was our only fan, so when we broke up after two gigs (both on the same night), he started playing with John. Nobody wanted to sing, so I got stuck with the job.

For the record Beastie Boys stands for: Boys Entering Anarchistic States Towards Internal Excellence. That might sound kind of serious or it might sound idiotic, probably both, but it seemed funny at the time. We played our first club gig at A7. If you came up in N.Y.C. hardcore, you probably know the place. If not, it was like playing in your aunt's living room - that is if your aunt's living room had cat pee all over and was a part time crack house. Then we opened for Reagan Youth and I think Even Worse at what was once the legendary club, Trude Hiller's. H.R. of the Bad Brains saw us play and gave us a gig opening for them at the closing night of Max's Kansas City. Talk about irony. Then we broke up.

It didn't seem funny anymore. No sooner had we broken up then our good freind Dave Parsons came through with an offer to record at 171-a studios. This was Jerry Williams' place, most famous for the Bad Brains ROIR tape. Dave ran a record store in the basement where we all hung out called Rat Cage. The Brains were on tour and the studio was going out of buisness, so we had an oppertunity to record. We showed up on a freezing winter day. Barrowed a guitar from some guy we had never met, and proceeded to record with a North Carolina friend of Williams' named Scott Jarvis. At the time, Jarvis seemed like a madman, but he knew how to manipulate four tracks and an Echo-Plex. We recorded the whole thing in two days, but then the landlord kicked the studio out so we had to mix in Jarvis' apartment. The Polly Wog Stew EP was the result.

Jarvis later turned into a good friend and ended up as a tour manager and D.J. for us on the Modona "Virgin" tour. After taking some pictures for the back of the 7" cover, Yauch put the artwork together at his girlfriend Maggie's mom's office. Then, as usual, we broke up again. When the EP came out we decided, fuck it, and did some reunion gigs. That lasted for a minute, then John grew tired of it and we broke up for a third time. Adam Horovitz and his band, The Young and the Useless, had been opining for us, sometimes even covering our songs. So when John moved on, Adam was his logical successor on guitar.

We lasted for a while like this, playing around, writing some songs, waiting untill we had enough material to go into a studio and record, Somehow Yauch hooked us up with this guy who was a chef of an enigineer of a chef engneer named Doug Pomeroy. Anyway, he hooked us up with a studio where they just did commercial jingles, so it didn't really have the hardcore vibe, whatever that means. T

he group Meco had recorded their disco Star Wars shit there. So the only stuff that came out that we really liked was the shit where we were just fucking around trying something diffrent. These songs, or whatever they were, became "Cooky Puss" and "Beastie Revoloution." Again our friend Dave helped us put the record out, but this time we werre collecting Sugarhill and enjoying 12" singles more than hardcore 7" singles, so "Cooky Puss" became out first 12" single. The weird thing was that people started to like this shit, clubs were playing it and we even got to travel as far as Detroit, Rock City, The Big Time. We'd play our insturments for a bit, then put them down and MC. Funny enough, here we are again.

After that most of us know what happened. They recorded Licensed To Ill with Def Jam. (Which later they regreted for licencing agreement and the boys never received any money for the entire album) Then they recorded Pauls Botique with Capitol. On the next full length album, Check Your Head, the made their own label, Grand Royal, in conjunction with Capitol, They also sold their next album, Ill Communication under this label. Anything besides that is history. Guarenteed Fresh! 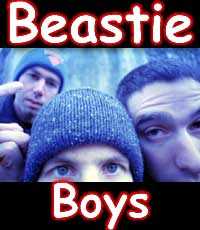