Hailing from the Highland and White Lake regions of Michigan, Bear Vs Shark strive to make music that is a cathartic, inspiring and emotionally cleansing experience for themselves and their listeners. Bringing a sense of musical history and genuine sincerity to their songs, they play with no emotional pretenses and hope to show true love for the music that has inspired them.

Although forming two and a half years ago the members of Bear Vs Shark are life-long friends and grew up together, according to the band…”like the kids from IT.” Getting their start in Ann Arbor they branched out into the Great Lakes region and began playing around the lower peninsula of Michigan. The band became known for its unique combination of musical influences ranging from
The Clash, Led Zeppelin and Black Sabbath to The Commodores, Husker Du, Fugazi and Archers of Loaf. This in conjunction with an unorthodox live show, frequently leaving its members nursing
injuries, won them a loyal and growing following. Playing with broken teeth, bloody noses, torn cartilage and migraines Bear Vs Shark endured and eventually, through a well-circulated demo, gained the attention of Equal Vision Records. Shortly after, BVS signed with the label and a new chapter in the band’s history began.

In February of 2003, BVS entered Big Blue Meenie Studios (Thursday, Breaking Pangaea, Taking Back Sunday) to record their debut, Right Now You’re In The Best Of Hands. And If Something Isn’t Quite Right, Your Doctor Will Know In Hurry (out July 22th). Drawing from an ever-increasing list of influences the album is a true reflection of the band’s unique approach to writing and a testament to their eclecticism. 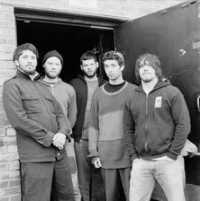