But B.B. King, as well as the entire blues genre, is not radio oriented. His classic songs such as "Payin' The Cost To Be The Boss", "Caldonia", " How Blue Can You Get", "Everyday I Have The Blues", and "Why I Sing The Blues", are concert (and fan) staples.

Riley B. King was born on September 16, 1925, on a cotton plantation in Itta Bene, Mississippi, just outside the Mississippi delta town of Indianola. He used to play on the corner of Church and Second Street for dimes and would sometimes play in as many as four towns on a Saturday night. With his guitar and $2.50, he hitchhiked north to Memphis, Tennessee, in 1947 to pursue his musical career. Memphis was the city where every important musician of the South gravitated and which supported a large, competitive musical community where virtually every black musical style was heard. B.B. stayed with his cousin Bukka White, one of the most renowned rural blues performers of his time, who schooled B.B. further in the art of the blues.

B.B.'s first big break came in 1948 when he performed on Sonny Boy Williamson's radio program on KWEM out of West Memphis. This led to steady performance engagements at the Sixteenth Avenue Grill in West Memphis and later to a ten minute spot on black staffed and managed radio station WDIA. "King's Spot", sponsored by Pepticon, a health tonic, became so popular that it was increased in length and became the "Sepia Swing Club". Soon, B.B. needed a catchy radio name. What started out as Beale Street Blues Boy was shortened to Blues Boy King, and eventually B.B. King. Incidentally, King's middle initial "B" is just that, it is not an abbreviation.

In the mid-1950's while B.B. was performing at a dance in Twist, Arkansas, a few fans became unruly. Two men got into a fight and knocked over a kerosene stove, setting fire to the hall. B.B. raced outdoors to safety with everyone else, but then realized that he left his $30 guitar inside, so he rushed back inside to retrieve it, narrowly escaping death. When he later found out that the fight had been over a woman named Lucille, he decided to give the name to his guitar. Each one of B.B.'s guitars since that time have been called Lucille.

Soon after his number one hit, "Three O'Clock Blues", B.B. began touring nationally, and he has never stopped, performing an average of 275 concerts a year. in 1956 B.B. and his band played an astonishing 342 one night stands. From the chitlin circuit with its small town cafes, ghetto theaters, country dance halls, and roadside joints to jazz clubs, rock palaces, symphony concert halls, college concerts, resort hotels and prestigious concert halls nationally and internationally, B.B. has become the most renowned blues musician of the past 40 years.

In the army, B.B. was introduced to the music of such guitarists as Charlie Christian and T-Bone Walker. "I heard an electric guitar that wasn't playing spiritual", recalls B.B. "It was T-Bone Walker doing "Stormy Monday", and that was the prettiest sound I think I ever heard in my life. That's what really started me to play the blues".

Over the years, B.B. has developed one of the world's most readily identified guitar styles. He borrowed from Lonnie Johnson, Blind Lemon Jefferson, T-Bone Walker and others, integrating his precise vocal like string bends and his left hand vibrato, both of which have become indispensable components of rock guitarist's vocabulary. His economy, his every note counts phrasing, has been a model for thousands of players including Eric Clapton, George Harrison and Jeff Beck.

B.B. has mixed traditional blues, jazz, swing, mainstream pop and jump into a unique sound. His singing is richly melodic, both vocally and in the "singing" that comes from his guitar. In B.B's words, "When I sing, I play in my mind; the minute I stop singing orally, I start to sing by playing Lucille".

"I'm trying to get people to see that we are our brother's keeper, I still work on it. Red, white, black, brown, yellow, rich, poor, we all have the blues".

"From my own experience, I would say to all people but maybe to young people especially black, white or whatever color, follow your own feelings and trust them; find out what you want to do and do it and then practice it every day of your life and keep becoming what you are despite any hardships and obstacles you meet".

"I'm me," B.B. told Time Magazine in 1969, "blues is what I do best. If Frank Sinatra can be the best in his field, Nat King Cole in his, Bach and Beethoven in theirs, why can't I be great, and known for it, in blues?"

In 1967, B.B. performed at the prestigious Montreux Jazz Festival, a portion of which was later aired over PBS TV. in 1968, B.B. played at the Newport Folk Festival and at Bill Graham's Fillmore West on bills with the hottest contemporary rock artists of the day who idolized King and helped cross him over to a young white audience.

In 1969, B.B. was chosen by the Rolling Stones to open 18 American concerts for them; Ike and Tina Turner also played on 18 shows. B.B. also made the first of his numerous appearances on Johnny Carson's "The Tonight Show". In 1970, B.B. premiered in Las Vegas at Caesar's Palace and at the Royal Box in the American Hotel in New York City as well as on the "Ed Sullivan Show".

In the early 1970's, B.B. toured Ghana, Lagos, Chad and Liberia under the auspices of the United States State Department. Besides playing the major jazz festivals around the world.

In 1989, King toured Australia, New Zealand, Japan, France, West Germany, Holland and Ireland for three months as a special guest of U2. King is featured in "When Love Comes To Town" on U2's album "Rattle and Hum". Starting in 1992, King has headlined the Blues Music Festival of American amphitheaters with three support acts.

On February 23, 1990 PBS started televising "All Day & All Night: Memories From Beale Street Musicians", which featured B.B. King and captured the lifestyles of musicians who performed on Beale Street (Memphis, TN) from the 1920's to the 1950's when being on Beale Street was like "living in paradise". King recalled on the half-hour special that Beale Street was "a place to learn, to make friends. It was a little world all of your own. There were always musicians who were willing to help you if you wanted to learn". And King and Rufus Thomas recalled Amateur Night at the Palace Theatre where "anyone who could carry a tune got a dollar for going on stage".

In 1990 King Received the Songwriter's Hall of Fame Lifetime Achievement Award, and in 1991 the Orville H. Gibson Lifetime Achievement Award from Gibson Guitar Company. In 1989, King's imprint was added to the Amsterdam, Holland Walk of Fame and in 1991 to the Hollywood Walk of Fame (between Milton Berle and Vivian Leigh). In 1973, King received the B'nai Brith Humanitarian Award from the Music and Performance Lodge of New York.

Over the years, B.B. has been bestowed eight Grammy Awards by his peers: Best Rhythm & Blues Vocal Performance, Male in 1970 for "The Thrill Is Gone", Best Ethnic or Traditional recording in 1981 for "There Must Be A Better World Somewhere", and Best Traditional Blues Recording in 1983 for "Blues 'N Jazz" and in 1985 for "My Guitar Sings The Blues" from "Six Silver Strings". In 1970, King's "Indianola Mississippi Seeds" won for Best Album Cover, an art director's award. In 1989 King received two more nominations: Best Contemporary Blues Recording "King Of The Blues 1989", and Best Rock Performance by a duo or group with vocal for "When Love Comes To Town" with U2 from U2's "Rattle And Hum". In 1990 King received another Grammy for the album "Live At San Quentin" as Best Traditional Blues Recording. In 1991, King was bestowed Best Traditional Blues Recording for "Live At The Apollo" and in 1993 the same award for "Blues Summit". And in 1996, along with Eric Clapton, Jimmie Vaughn, Robert Cray, Bonnie Raitt, Bu

B.B. King was inducted into the Blues Foundation Hall of Fame in 1984 and into the Rock and Roll Hall of Fame in 1987, where Sting of the Police made the induction speech. B.B. was the recipient of the 1986 National Association For Campus Activities Hall of Fame Award. B.B. was Blues Act of the Year in 1985, 1987, and 1988 Performance Award Polls. He is a founding member of the John F. Kennedy Performing Arts Center. B.B. King received the Grammy "Lifetime Achievement Award" in December of 1987 at the first televised awards in May 1990. He won the Lifetime Achievement Award from the Blues Foundation in 1997. B.B. Has received four honorary doctorates: Tougaloo (Mississippi) College (L.H.D.) in 1973; Yale University (D. Music) in 1977; Berklee College of Music (D. Music) in 1982; and Rhodes College of Memphis (D. Fine Arts) in 1990. In 1992 he received the National Award of Distinction from the University of Mississippi.

On May 3, 1991, "B.B. King's Blues Club" opened in Memphis, and also at the Universal City Walk in Los Angeles in 1994, and although King resides in Las Vegas, he plans to play at his clubs at least four times a year. A B.B. King Blues Club will open in New York's Times Square's E-Walk in early 2000.

In 1996, the CD ROM "On The Road With B.B. King: An Interactive Autobiography" was released to rave reviews including an "A-" in Entertainment Weekly. Also in 1996, B.B. King's autobiography "Blues All Around Me" (written with David Ritz) (Avon) was published and won second prize in the prestigious Eighth Annual Ralph J. Gleason Music Book Awards. The biography "The Arrival of B.B. King" by Charles Sawyer was published in 1980 by Doubleday.

In 1999, B.B. King released Let the Good Times Roll, his tribute to Louis Jordan. "Louis Jordan was a great musician," says King, "and in my opinion, was way ahead of his time. As people get to know him, they will realize what a great contribution he left to the music of today."

B.B. King has been nominated for 20 Grammy Awards through 1999. In 1970, King's Indianola Mississippi Seeds won a Grammy Award for Best Album Cover, an art director's award. 1969's "The Thrill Is Gone" was installed in the Grammy Hall of Fame in 1998.

FILM APPEARANCES
Shake, Rattle & Roll
When We Were Kings
Heart & Souls
The Bluesman
Run of Hearts
Spies Like Us

AUTOBIOGRAPHY
1996 Blues All Around Me by B.B. King with David Ritz (Avon)

BIOGRAPHY
1980 The Arrival of B.B. King: the Authorized Biography by Charles Sawyer (Doubleday)

RALPH J. GLEASON MUSIC BOOK AWARDS
1996 Second Prize for Blues All Around Me: The Autobiography of B.B. King by B.B. King and David Ritz 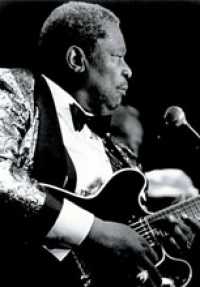