Biography:
Despite her child-like persona, you can't help but sense Hamasaki was never truly a child. Born in Fukuoka on the southern island of Kyushu, she was just a toddler when her father walked out. "I don't even know if he's dead or alive," she says. Raised by a single mother and a grandmother, she began modeling locally at seven, in part to earn money for the family. It was an unusual and lonely childhood in this country of steadfastly nuclear families, but Hamasaki says she wasn't aware of what she was missing. "I thought mommy's life was strange, not mine," she says. "I didn't understand my loneliness until I moved to Tokyo." Hamasaki made that move at 14 to pursue an acting and modeling career. Old magazine spreads feature the sweetly smiling young starlet clad in bathing suits or prim outfits that would never make it to her own wardrobe. After bit parts in five low-budget movies and a handful of TV dramas, she tired of acting and, with her tiny frame, did not have a future in modeling. Canned by her talent agency and dropping out of school in the 10th grade, Hamasaki frittered away her days shopping at trendy shibuya boutiques and her nights dancing at the massive Velfarre nightclub in Roppongi.

Then a friend who worked at the club, owned by the record label Avex, invited her out for a night of karaoke that forever changed her life. The friend had also invited Masato ("Max") Matsuura, who introduced himself to Hamasaki as a producer. "I'd never heard of Avex," Hamasaki recalls, laughing. "When he asked if I wanted to pursue a singing career, I said, 'No way.' He was this older guy, and I thought the whole thing sounded fishy." Over the following year, though, Matsuura persisted. Finally she relented to his request that she at last attend vocal training, only because "I had nothing better to do." But the classes were dull and the teachers harsh. "I felt like I'd gone back to school," she says. "If there are rules and regulations, I can't help it, I want to break them."

Finally she confessed to Matsuura that she'd skipped most of the classes. But instead of writing her off, he proposed sending her to New York for some real training. "I thought he was kidding," she says. "I mean, I was 17." Reluctantly she went, staying in a midtown hotel for three months, taking singing classes a few blocks away. "New York was a relief-not all hierarchical and rule-bound," she says. When Hamasaki returned to Japan, Matsuura proposed another challenge. Because she has trouble voicing her thoughts, Hamasaki had over that year corresponded with Matsuura through letters, which must have echoed of simple yet poignant lyrics. "He read them and said, 'Why don't you try writing songs?'" The idea that she could express herself in song imbued her with a new sense of direction. "No one had ever asked anything of me before, or expected anything of me," she says of Matsuura, whom Hamasaki and everyone at Avex calls by his title, senmu, or managing director. "Part of me was flattered; part of me was terrified but didn't want to admit I couldn't do it. Plenty of people had patted my head and said, 'Aren't you cute.' Senmu gets mad, but when he praises me, I know I've won it. He's the one who found me and drew me out." He stuck by her, too, when superstardom didn't occur overnight. Her first two singles in 1998 stopped at No. 20 on the charts; her next four barely broke the Top 10. Then Love busted into the No. 1 slot in April 1999, and every one of her singles have hit the top ever three since. The responsibilities that came with her ascension as a recording star were a fair trade-off for the joyous release of writing. "The 'Hi, this is Ayu' person on TV," she says, slipping for a moment into her alter ego's nasal, anime-character voice, "is the person I know they want to see. I understand it's my role to realize people's dreams. I'm O.K. with that so long as my songs are my own. No one can take my song away from me."

She is complicit in the brutal arithmetic of fame: trading the freedom she cherished for the right to tell her story through songs. Indeed, she has transcended mere songstress status and become something even more venerated in our consumer driven society. "It's necessary that I am viewed as a product," she says. "I am a product."

Trivia:
(from imdb.com)
Grew up in a single parent home with mother and grandmother.
Was the highest earning entertainer in Japan (2002).
Started modeling since age 7.
Was the first artist to have 4 singles on the Japan top 10 charts simultaneously.
Won MTV Asia's Best Female Artist Award (2002). 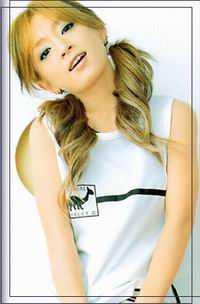