The band have sold ten million albums in a career spanning 15 years, but although the core of their support still comes from those who bought 1982's eponymous multi-Platinum debut, they continue to come up with fresh, interesting and exciting ideas. One listen to 'Arena' - the third album to throw keyboard wizard Geoff Downes together with vocalist / bassist John Payne - is all it takes to understand why ASIA still exist, and why their fans continue to celebrate the fact. Nobody else makes such intricate yet accessible music, which has been the band's blueprint since their inception.

"The musical concept of ASIA has always been to play music that is panoramic, symphonic and Rock at the same time," explains Geoff Downes. "But it's good for the group to try different directions, not just made carbon copies of the previous record, and I'm confident that the fans will like what we've done."

While 'Arena' was being conceived, ASIA always knew exactly what they had in mind, so besides using A-ha / 21 Guns drummer Michael Sturgis again, they tracked down three specific musicians - guitarist Aziz Ibrahim (Simply Red) and Elliott Randall (Steely Dan) and percussionist Luis Jardim - to help them realise their vision. 'Never' and 'U Bring Me Down' might deliver all the expected pomp and splendour, but this new approach has paid dividends on material like 'Into the Arena', 'Two Sides Of The Moon' and 'Heaven', each tune gliding along effortlessly on wave after wave of intoxicating Eastern rhythm. Unbelievably, 'Two Sides Of The Moon' even ends up with a spoof reggae jam section!

"Maybe ASIA's music had become a bit too serious," ponders Downes, who has even replaced some of his trademark banks of synths with warmer sounding Hammond organs. "Maybe some of the arrangements of our previous albums were a bit too dense, so we made a concerted effort to make this one sound very natural. That said, there are also longer songs like 'The Day Before The War' (nine minutes) and 'U Bring Me Down' (seven minutes), which I suppose you could say fit in with the 'old' ASIA sound."

However, the 'ASIA' debut topped the US charts for ten weeks, selling five million copies in the process and spawning such massive hits as 'Heat Of The Moment', 'Sole Survivor' and 'Only Time Will Tell'. Meanwhile 1983's successor, 'Alpha', also gave the world the Top Ten Hit 'Don't Cry', selling two million along the way.

Subsequent releases 'Astra' (1985) and the part-compilation 'Then And Now' (1990) saw Howe, Palmer and eventually Wetton all eventually seeking pastures new, leaving just Geoff Downes alone at the helm. Luckily, the keyboardist had the extreme good fortune to cross paths with the golden-voiced John Payne (who had worked with Roger Daltrey, the Electric Light Orchestra and unknown London act The Passion) in time to record 1992's watershed release, 'Aqua', and ASIA's long-overdue regeneration process could begin in earnest.

Realising that they had plenty of wasted time to make up for, ASIA toured relentlessly, visiting the States twice and selling out medium-sized theatres all over the UK, where they had not played since a couple of Wembley Arena dates in the early 80's. 'Aqua' also topped the Japanese charts.

"In many ways it was like re-decorating your house, it was something fresh," said Downes at the time. "The group had become stale over a number of years and it was as if one chapter had closed for another to open."

Meanwhile, far from taking the 'new' ASIA to task over the departed ex-members, the UK press shocked everybody by acclaiming 'Aqua' as a return to form. "A major work that spans decades of influence, yet sounds fresh and relevant," claimed Rock World, while Raw stated: "Throughout ASIA's history one factor has remained constant - the songs." Metal Forces proclaimed it to be: "Classic AOR from a classic band."

To record and tour 'Aqua' and its follow-up, 1994's 'Aria', ASIA have occasionally borrowed back former members like Howe and Palmer, as well as the cream from the up 'n' coming musicians like Al Pitrelli (Alice Cooper / Danger Danger / Widowmaker), ex-Dare guitarist Vinny Burns and Trevor Thornton (Walk On Fire). But Ibrahim, Randall and Sturgis did such sterling work on 'Arena' that ASIA hope to retain them for a 15th Anniversary tour which is being planned for later in 1996.

But effectively they have become a duo - and that's the way they seem to like it. Statisticians might even be surprised to learn that John Payne has now been a member of ASIA for as long as his predecessor, John Wetton.

"People are now beginning to accept John Payne as the singer of ASIA," smiles Downes, "but there will always be someone. Alan White once told me that even after being in Yes for 15 years people would still think he was Bill Bruford!" 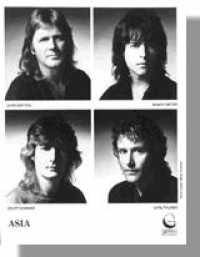