Recently named one of Teen People’s 25 Hottest Stars Under 25, Ashley Tisdale is best known for her role as Maddie, a hotel candy counter clerk and baby-sitter of devious twin boys who live in The Tipton Hotel on the Disney Channel series “The Suite Life of Zack & Cody.”

Ashley can currently be seen starring opposite Zac Efron in the original movie musical, “High School Musical,” directed and choreographed by Kenny Ortega. The film premiered in January 2006 and was the highest rated telecast in Disney Channel history. Ashley made music history by being the first female artist to ever debut with two songs simultaneously on the Billboard Hot 100 chart (“Bop To The Top” and “What I’ve Been Looking For,” both duets with co-star Lucas Grabeel from the RIAA triple-platinum certified “High School Musical” soundtrack).

Ashley has currently recorded her debut album for Warner Bros. Records, "Headstrong", due out February 6th 2007. Her new version of “Kiss The Girl” is featured on the special edition DVD of “The Little Mermaid.”

Ashley in the recording studio

Ashley’s acting credits include a featured role in the film “Donnie Darko” with Jake Gyllenhaal, Maggie Gyllenhaal and James Duval. She was a series regular on “Nathan’s Choice,” “Mayor of Oyster Bay” and “The Howie Mandel Pilot,” and had recurring roles on “The George Lopez Show,” “Still Standing” and “The Hughleys.” Guest star roles include “Grounded for Life,” “Strong Medicine,” “Boston Public” and “Seventh Heaven,” “Malcolm in the Middle,” “Charmed,” “Hannah Montana,” “Once and Again” and “Saturday Night Live.” Ashley also shot the-now-famous
T-mobile commercial with Catherine Zeta-Jones.. On the animated front, Ashley has a recurring role on Disney Channel’s “Kim Possible” and will voice one of the lead characters in the new Disney Channel animated series “Phineas and Ferb.”

Manager Bill Perlman, who continues to represent her today, discovered Ashley at the age of three in her hometown mall in Monmouth County, NJ. After booking the first audition she was sent out on, Ashley went on to star in over 100 national network commercials. At the age of eight she booked a leading role in the national tour of the Broadway musical “Les Miserables.” She then toured internationally with the cast of “Annie.”

When Ashley isn’t pursuing her acting career, her passions include singing (she sang at the White House at the age of 12), shopping, and hanging out with her friends and sister Jennifer, who is also an actress. 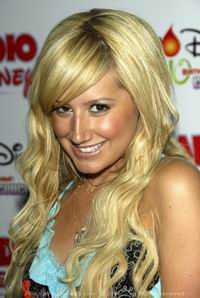