Ja Rule. J. Lo. Big Pun. Fat Joe. She’s worked with some of the industry’s best—writing lyrics and singing hooks that help their records reach the top of the music charts. Now it’s time for 21-year-old Ashanti Douglas to take center stage and shine on her very own self-titled debut, the much-anticipated Ashanti. In April, Ashanti hits the scene as the first R&B vocalist on Murder Inc. Although this is a departure for the hip hop powerhouse label that has a roster including rappers Ja Rule, Vita and Charli Baltimore, all indications show that the transition has been more than smooth and successful. Ashanti’s lead single, “Foolish,” has already made waves at radio—getting heavy rotation on urban stations and galvanizing fans to demand an earlier-than-planned release of her album, a tantalizing blend of edgy hip hop groves and subtle R&B styling. With Ashanti’s clever lyrics and slick production by Murder Inc.’s president Irv Gotti, “Foolish” immediately reminds music lovers of the Notorious B.I.G.’s popular “One More Chance” remix. (True old school heads will remember the familiar melody from DeBarge’s 1983 hit “Stay with Me.”) Either way, you’re sure to be hooked. And that’s what Irv’s depending on.

“Ashanti's album is full of ‘one-listens’ like ‘Foolish’,” says an exuberant Gotti, whose passion for this project is palpable. “When you hear this song, and other songs on the album like “TK,” which is based on one of Scarface’s old cuts, you remember it, you’re bopping your head to it and you immediately get it.”

Making sure people “get it” and truly feel where she’s coming from is also of the utmost importance to Ashanti, who penned all 12 songs on the album, most written on-the-spot in the studio. “I want to create something so real and reflective that people just sit back and listen like, ‘damn, was she in my window last night, because this really happened to me,’ ” says the eldest daughter of a dancer and singer. “Everyone has gone through something that’s on this album, and I want to be able to articulate their feelings.”

With cuts like “Happy,” “Baby” and “Rescue,” which detail the ins and outs of relationships, the precocious Long Island native is sure to make her mark with streetwise sophistication similar to the reigning queen of hip hop soul, who first blended hardcore beats and heartfelt lyrics in the early nineties. “Mary paved the way,” says Ashanti, who began pursuing her singing career at age 12 and also cites Ella Fitzgerald and Blue Magic as influences. “I didn't want to sing only slow songs and I didn’t want to be spittin’ rhymes. But Mary put those concepts together. She cleared the way, and now I’m following my own path.” Says Irv, who executive produced the project, “I want Ashanti's album to pick up where Mary’s My Life left off. By no means are we trying to take Mary’s slot because she’s undoubtedly the queen. But Ashanti is Murder Inc.’s princess—with a gansta feel to her.

I really want men to champion this album,” Irv continues. “Usually, with an R&B record, women pioneer it or champion it before anyone else. I want men, thugs, ganstas—I want them to hear the record and be like, ‘yo, this shit is hot.’ That’ll make women like it even more. Ashanti flips the hardcore songs and makes ‘em sweet, so she appeals to both sexes.”

Ashanti’s already well established track record has placed her on the sweet road to success. (Ja Rule’s “Always On Time” has broken history as Def Jam's top selling single. Her contribution to J. Lo's “I'm Real” helped give the former fly girl-turned-actress-turned-singer urban credibility.) With her own album, Ashanti continues the saga that is sure to gain her the hip hop/R&B princess crown. And the impact she hopes to make during her reign is simple: “If you’re a person who has trouble expressing yourself, all you have to do is pop in this album and it’ll speak for you,” she says with all sincerity. “When you listen to this album with your man or your girl, everybody will be on the same page.” Says a much more boastful Gotti, “Ashanti delivers at the highest level. And she has this personality that makes people love her. She’s got too many people feeling her, too many hit records and too much heat for her to stop,” he praises. “She can’t lose.” 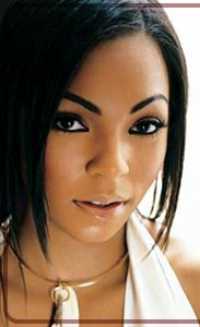