There's no doubt that Amanda Perez knows who she is and what she wants. The Fort Wayne, Indiana, native thinks, breathes, eats, and sleeps phat beats and smooth melodies 24-7, and all she wants is for you to feel her. WHERE YOU AT? - The 13-track debut album on Universal Records demonstrates Amanda's formidable skills behind the mic and in the producer's booth.

Like the Gemini she is, Amanda possesses multiple talents (she plays keyboards, drums, guitar and bass and can also spit rhymes and croon lyrics with ease) and multiple moods. Amanda can go from the rock hard rapid beats of the sexy "Whoa," to the playful flirtation of "I Like," to the romantic balladry of "Angel" or "Never" without blinking an eye. She can hit Southern hip-hop flavor one minute on "Where You At?," flow over reggae-influenced rhythms like on "Get 'Em Hype," then smooth it out with sexy harmonies and a Latin tinge, as on "In My Life." Amanda credits her big sister for musical versatility. "When I was growing up I use to listen to all the pop and R&B albums, my sister use to play, especially Michael Jackson and soon realized that there was a wide range musical sounds and influences that I could use while honing my talents," states the young lady.

Born into a large Mexican-American family, Amanda started singing at the age of 4. She watched her uncle lead her older cousins in a successful local Tejano band known as the Sombra Chicana USA. By age 9, she had learned to play the drums and had picked her way through dozens of radio hits by ear on a keyboard. Soon, 11 year-old Amanda was performing with the kiddie band Sombra Chicana Chiquitos, playing intermissions during her uncle's gigs. Eventually, she introduced her own songs into the set list, having penned the romantic ballad "You Are My Love" while still a pre-teen. "My mom was tripping out," Amanda laughs. "She would tell me in Spanish, 'M'ija, how were you making that?'" But the baby of the family had caught on to the lives and loves of her siblings and cousins. In fact, catching on fast is one of Amanda's strongest skills. Like the way she learned to play the drums at 9: "My cousin Bobby was the drummer, he would show me little things, and I would do it. If I watch you and I'm really paying attention, I can play it right after. I played by ear."

Though blessed with talent, she was outgrowing the Chiquitos. Her uncle felt the she was too young to go on the road with his all-male band despite her pleading.

Amanda, who was getting noticed for her skills on the drums'2nd for her crisp lady-thug-style of dress, went to work at her parents' trucking business, but never abandoned her music. "I didn't want to work for my parents my whole life," Amanda reveals. "I wanted to be able to make something of myself and have people look at me and say, dang, she went far and she did it by herself."

Amanda would go into her uncle's recording studio, where she taught herself the recording equipment and recorded a 5-song demo. She also began performing at local talent shows and expos, astounding audiences with her energy and skills. One of Amanda's cousins talked her into entering the talent show for the Indiana Black Expo and she walked away as the Junior Vocalist of the Year champ in 1999. "My whole family cried," Amanda remembers. "The audience was standing on their chairs taking pictures and people were running down the aisle to get to the stage. When I saw the crowds reaction, I thought, it's only gonna get bitter from here."

At the age of 21, Amanda Perez has accomplished her dream. WHERE YOU AT?, is the banging first album of music that Amanda wrote, produced, and performed all on her own. "I can't explain it, I'm blessed to the fullest," says Amanda, who displays her "lady thug" style with braids, piercing, and tattoos on the cover of her CD. "I always knew that one day I would make it. Making this album was a dream come true, and I truly believe that God has blessed me." 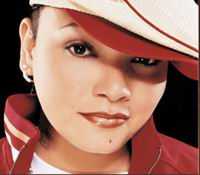