Alexandra Spencer Johnson, was born November 4, 1986. She has six brothers and three sisters. Her first singing lessons came at the early age of six, with her first public performance at age nine. Her first national television performance was singing the national anthem at the Canucks final home game when she was eleven. She got that appearance by winning a contest sponsored by the popular KISS-FM radio station. Alexz beat out over 800 other people, many of whom were professional adult vocalists. This led to many other opportunities and anthem performances at nearly every possible sporting venue. She began co-writing her own songs and working on various demo tracks, and throughout that time did small film and commercial spots. Her mainstream acting debut came when she landed the role of Annie Thelen on The Disney Channel's "So Weird." Alexz's portrayal of Annie was nothing short of amazing, considering her limited acting experience. Unfortunately, "So Weird" was rapidly approaching the 65 episode limit Disney has for their original shows. Alexz has disappeared from the spotlight a bit recently, with "So Weird" re-runs only airing during the early morning hours. Rumor has it she is still pursuing a record contract, though with her voice I can't see how that'd be too difficult. She's a personal favorite of mine and I can honestly say any record company would be stupid to pass on her talent.

At age nine, Alexz started to perform publicly, being asked to sing at local functions in town. She entered the P.N.E. talent search, becoming a finalist, and began to display a unique confidence and composure in front of an audience, adoring any opportunity to astound them with her vocal ability.

At age eleven, Alexz entered an Anthem contest sponsored by a popular radio station, KISS-FM, and became a finalist of over 800 competitors, most of which were professional adult vocalists. She won the opportunity to sing for the season's end Canucks game, and the station was so impressed with her talent, "Fred and Cathy" invited her on their program to sing. On the morning of the game, Alexz sang a heart rending version of "My Heart Will Go On", acapella, resulting in a huge following of listeners calling the station to ask about this little girl with the incredible voice. The listeners relentlessly called B.C.T.V. asking that Alexz be televised singing the anthem at the game, so that they could hear her. Because of the huge response, B.C.T.V. finally broke with tradition, giving Alexz her first opportunity to sing on National television. She received her first CBC interview, and on live television she sang our anthem as it should be sung, winning acclaim from the Vancouver Sun, as the best anthem singer of the season. Letters were sent to the editor asking to send Alexz to Ottawa to show them how the anthem should be sung.

After this event, Alexz became known as the KISS-FM girl, being asked on their program to sing for their listeners. She received many calls from management wanting to represent her, and began performing all over town. She was the solo vocalist for the B.C. Summer Games, and recorded their theme song, "Reach for the Stars". She opened the Variety Show, singing a duet with Bob McGrath, "I'm the Bravest Individual". She sang the anthem at every possible venue, from baseball championships to the N.B.A. and the N.H.L. She performed at the Molson Indy, doing her first complete set of songs, and ended 1999, as the sole entertainment at Planet Hollywood for New Years Eve. In three short years, at the age of twelve, Alexz had become quite the professional. She was now ready for the next step.

For the past two years, Alexz has gained much experience in the studio. She began working as a demo singer on various projects, and worked with producers and songwriters, co-writing some of her own music, and developing her own direction and sound. During this time she received a factor grant, recording the song "More than Friends", and was a finalist in the YTV achievement awards. Alexz was now ready for her own demo to go out to record labels in the hopes of achieving her ultimate goal of becoming a recording artist, like her idol, Celine Dion. However her life was to take another direction.

During most of Alexz's singing career, she was signed with an agency, doing commercial work, and some film, to help alleviate costs incurred with her singing career. Her agent received notice of an audition for the Disney Series, "So Weird". They were looking for an outgoing charismatic fifteen year old to play the part of Annie Thelen. First and foremost, she had to be able to sing. Completely unaware that she had won such a huge part, (as the show is only aired on family channel in Canada), So Weird, was acclaimed by T.V. guide as the number one kids show, with a huge internet fan base, receiving 60,000 hits a day. Fan clubs started everywhere, with Annie's popularity taking the show to a new level. Episodes were written around Alexz's vocals and talent, with fans wanting to know where they could find her music. Disney used one of Alexz's songs, which she co-wrote, for the episode of Carnival, where she enters a talent contest. Alexz couldn't have been more excited having her own music on TV.

Alexz recently completed a promo tour from L.A. to New York, was being interviewed by all the teen magazines, and has been recognized as an up and coming super teen, with charisma and star quality. She was flown to L.A. to record the original song, "Everything", for the movie "The Other Me", about a boy who clones himself. *N Sync, and Aaron Carter were also featured on the sound track.

During 2001, Alexz was featured on BroadbandTalent.com and was their most requested artist in the pop category, resulting in two promo advertisements in Billboard Magazine. With the guidance of her new manager, Mr. Neil Macgonigill, Alexz decided to turn down a recording contract that was not suitable for her career. Therefore, she is still pursuing a contract that will be a perfect fit. (She is getting tons of music sent to her!!). She will be down in L.A. in February to record a new demo, as she has been writing new music with her brother, Johnny Elkins, and C.J. Vanstan. 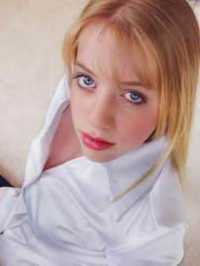