The year 1980 was a rife with headline-grabbing events. It was an election year in the U.S., with Ronald Reagan given the nod by American voters. The world mourned the death of John Lennon. Mount St. Helens erupted in what looked like an atomic blast.

The biggest news blast in music was country, thanks to the release of the file Urban Cowboy. Discos changed decor overnight to become country dance clubs and Americans by the millions traded in their loafers for cowboy boots. RCA Records had country's first platinum-selling album with Wanted: The Outlaws. Though it didn't grab many headlines at the time, the label had another important first that year, when on May 31st it released "Tennessee River," the debut single from a band named Alabama. The song shot to #1, the first of 40 Radio & Records chart toppers. The band went on to win the Academy of Country Music's Artist of the Decade title for the 1980's, sell in excess of 45 million albums, become the first group to ever be named the Country Music Association's Entertainer of the Year and forever change the way bands were accepted in the country format.

It wasn't an over night success story. Cousins Randy Owen and Teddy Gentry grew up working the fields and picking cotton on Lookout Mountain, outside of Fort Payne, Alabama. Money was tight for the families, and they spent much of their time and entertaining themselves by singing and playing gospel music. Randy, his parents and sisters started a gospel group, The Singing Owens. By the time Randy and Teddy were in the fifth grade the boys had discovered Merle Haggard and decided to pursue careers in country music. Another cousin, Jeff Cook had been playing ukulele and performing at school functions from the time he was in the second grade, and by the time he reached his teens he'd progressed to guitar, keyboards and fiddle. He was a deejay at a local radio station by age 14, and founded J. C. And The Chosen Few (the band referred to in "Tar Top") while still in high school.

In 1969, using equipment Jeff had been collecting, the three cousins started a band called Young Country. By 1972 the band had added friend Bennett Vartanian as the drummer and was calling itself Wild Country, and even though they would ultimately achieve superstar status as Alabama, Wild Country remains the band's corporate identity.

In 1973 the band relocated to Myrtle Beach, South Carolina to become the house band for a club called The Bowery. Working for tips, they played six nights a week honing the harmonies that would later become a trademark. They stayed seven summers at The Bowery, gaining a huge regional following, changing the band name to Alabama and utilizing one drummer after another before Mark Herndon came into the picture. Mark had grown up in a military family and was influenced by his concert pianist grandmother and classically-trained pianist mother. Fortunately for the group Alabama, Mark's interests lay in other forms of music. He was playing rock'n'roll when his mother learned of band in Myrtle Beach who needed a drummer. Though she would have no doubt wanted him playing in a symphony, she steered her son to Alabama.

These particular four young men wouldn't have it. Their sound depended on them playing their instruments and Mark adding his drum edge. RCA listened to that sound and agreed and with the major label backing them up, Alabama began to change the way the industry looked at bands. The debut album on RCA was title My Home's In Alabama, and every song released from it became a #1 hit.

One event in 1981 has a lasting effect. Alabama played a charity concert in their hometown of Fort Payne, and the money raised somehow never got out of the promoters' hands and into Fort Payne's coffers. The following year the band took control, staging the first June Jam, and entertainment extravaganza that brings in an excess of 60,000 fans a year and has raised millions for charitable causes. Thirteen years later fans are still being treated to country superstars as well as up-and-coming acts, whose careers are given a huge boost by the band from Fort Payne.

In 1982, Alabama had #1 hits with "Mountain Music," "Take Me Down" and "Close Enough To Perfect." Two of their albums went platinum, Mountain Music (which won the '82 Grammy) and My Home's In Alabama, and they took home honors as Entertainer of the Year and Group of the Year. Another album Grammy was presented to the band in 1983, this one for the platinum-selling "The Closer You Get. The title cut from the album hit #1, as did two more in 1983: "Dixieland Delight" and "Lady Down On Love". Once again, they swept the awards shows in the categories of Entertainer, Group and Album.

The fans kept right on buying Alabama's albums, too. Feels So Right and Mountain Music were certified triple platinum in 1984, Roll On and The Closer You Get were certified double platinum. One of their #1 singles that year, "If You're Gonna Play In Texas (You Gotta Have a Fiddle In The Band)" is considered one of the most important singles released that year and became on of the all-time most covered tunes by other groups. Another signature song, "Forty Hour Week (For a Livin')," was a tribute to America's working man and hit the top chart sport in 1985. Because of Alabama's success, more and more bands were getting a shot at stardom: Both Restless Heart and Sawyer Brown emerged in the mid-1980's and benefited tremendously from Alabama's ground-breaking work.

You'd think that a band with this much star power might begin to slow down round the time it turned ten years old, but not so with Alabama. In 1990 Alabama released "Jukebox In My Mind," which became the biggest chart record they've had to date, according to the Billboard researcher Joel Whitburn. Another huge single, "I'm In A Hurry (And Don't Know Why)," stayed #1 for two straight weeks in 1992. They continue to make hit records, sell in the multiples of millions and touch thousands of lives through the fundraising efforts of June Jam.

They also continue to make outstanding music. In Pictures, Alabama's 1995 RCA album, is one of the year's most exciting. Co-produced by the band and ace music man Emory Gordy Jr., In Pictures contains the same meticulous attention to song choice that made Alabama America's favorite band for a decade and a half. There's a smooth flow to the album ranging from the kickin' "Sunday Drive" (penned by Ray Kenny and Dak Alley) to the sparkling trademark harmonies on Robert Jason's "She Ain't Your Ordinary Girl" and the Southern soul of Jeff Cook and Phillip Wolfe's "Heartbreak Express." Check out the tightly crafted lyrics on songs such as "I've Loved A Lot More Than I've Hurt" and the poignant title cut. There are universal sentiments expressed in the raucous "Say I" and tender ones in songs like "It Works", "My Love Belongs To You" and "The Maker Said Take Her."

There's a certain excitement that comes for an artist when he knows he's delivered something great, and Randy Owen agrees that In Pictures is a project to be proud of. "It may be the best album we've ever done," he says.

Once again, Alabama has delivered a wonderfully diverse album destined to be one the fans keep on the top of the CD pile -- playing it over and over and never losing the feeling that they're hearing something fresh and new. Fifteen years later, this band still puts the time and effort that the devoted in the beginning into every song, every note, every guitar lick. And that's the primary reason Alabama stays on top when it comes to the fans -- every time. Stay tuned for the next fifteen. 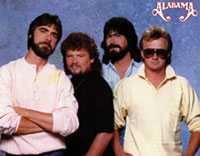