Afroman, born Joseph Foreman, has been writing music ever since high school. He got his start at church where he played drums and eventually moved on to playing guitar. Before living in Mississippi, he resided in East Palmdale, Los Angeles. While there, he released "Sell Your Dope" [Nov. '99] and played parties, sidewalks, contests, etc.

He would then move to Hattiesburg, Mississippi after becoming fed up with the LA vibe. There he found backing by a drummer, Jody Stallone, and a keyboardist/bassist, Daryl Havard. In the spring of 2000 he concocted his 2nd LP "Because I Got High" with producer Tim Ramenofsky.

He distributed it at shows and with the help of T-Bone Records in Hattiesburg. His fanbase grew tremendously and eventually gained the attention of Universal Records to which he is now signed. His new album, to be released in August, entitled "The Good Times" is a compilation of his first two LPs and a few new ones.

With the inclusion of "Because I Got High" on the "Jay and Silent Bob Strike Back" soundtrack and hype from Howard Stern coupled with an ever growing fanbase the future is rapidly approaching... [pause for dramatic effect] and the future is AFROMAN. Bucoooc!!! 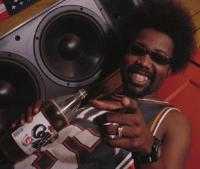