When you're playing a style of music that doesn't really fit anywhere, you run a risk. You're challenging people to leave their niche, to leave their predetermined ideas of what they're supposed to like. Luckily, we have a lot of people who just focus on the music and appreciate us for what we are. So we get fans from all different genres of music, the jocks, the spooky kids, skaters, college kids, punk rockers, hardcore kids, metal kids, all that"

The origins and history of AFI are as humble as they are passionate, beginning with the meaning and philosophy behind the acronym now known to an ever-growing legion of fans the world over: A Fire Inside.

Over 10 years on and counting, the same inner flame that fueled four teenagers making a primal noise in a Ukiah, Calif., garage has propelled AFI to unforeseen musical and professional levels, as evident on Sing The Sorrow, due out March 11, 2003, on DreamWorks Records. "We've been doing this for a long time, and we love it more than anything," says AFI singer Davey Havok"To play music you're passionate about every night - it's like a dream. Sometimes you get sick; sometimes you get really tired, but I can't imagine doing anything else with my life"

If Sing The Sorrow is any indication, Havok won't have to worry about doing anything else for a long time. Co-produced by Jerry Finn (Rancid, Green Day, Jawbreaker) and Butch Vig (Nirvana, Smashing Pumpkins), the record retains the Bay Area outfit's signature aggression and pathos - forging ever forward into uncharted territory like the virtuoso guitar intro of "The Leaving Song Pt. 2" or the industrial-leaning break and Dead Can Dance-worthy outro of "Death Of Seasons"

Meanwhile, from its sublime intro through beautifully subdued verses and infectious choruses, first radio track "Girl's Not Grey" is a standout that both recalls AFI coming into its own on 2000's The Art Of Drowning and hints at a myriad of future directions. For the purists, "Dancing Through Sunday" and "Bleed Black" come strapped with generous chant-along opportunities and heavy-as-hell, bolt-tight riffs and rhythms. And as with virtually every track on Sing The Sorrow, these are all imbued with alternately brooding and celebratory lyrical imagery of rebirth, resurrection, apocalypse, all somehow deeply personal - in other words, classic AFI. "We've always been able to do anything we want," says guitarist Jade Puget. "The credit for that goes to both the band and our fans: to us for striving not to sound like anyone else, and to our fans for embracing those changes and looking forward to the new directions each new record will take"

"It also comes from never having any other choice but to do everything ourselves," Havok adds. "We never planned or had any expectation of assistance from anyone else. And thanks to that work ethic, we were able to grow slowly and naturally so that when others gradually took an interest in what we were doing, whether it was Nitro [Records] or DreamWorks or whoever, they realized they couldn't change us even if they wanted to"

Although AFI first surfaced in 1992, on Dork, a split 7" with fellow Ukiah High School students Loose Change (featuring future AFI guitarist Jade), it wouldn't be until the band's third full-length, 1997's Shut Your Mouth And Open Your Eyes, that bassist Hunter (ex-The Force) would enlist. And it would be later still that the present AFI lineup would coalesce, with the addition of Jade (by then ex-Redemption 87) on the defining and now-classic fourth album, Black Sails In The Sunset, and the subsequent All Hallow's EP. The latter would give AFI its first taste of exposure beyond its long-cultivated cult following when the Offspring's cover of the EP's "Totalimmortal" appeared on the Me, Myself & Irene soundtrack and, in turn, on Modern Rock playlists nationwide. A year later, "Days Of The Phoenix," from The Art Of Drowning, would do the same, albeit with the band playing its own composition this time.

"I was completely in awe then - and still am now - to hear any of our songs on the radio," says Hunter. "The fact that radio would pick up on us based solely on the quality of the music is still difficult for me to fathom, as is everything positive that's happened for us. It all seems to have come naturally from our efforts, and honestly, that's really hard for me to comprehend"

In the meantime, AFI's live draw increased exponentially, and with good reason: To witness the AFI live experience is to understand both that unique internal chemistry and the undeniable bond between band and audience that has been honed and strengthened through nearly seven years of non-stop worldwide touring. Favorites from Black Sails, The Art Of Drowning and the All Hallow's and A Fire Inside EPs typically find the band fighting to be heard over the din of the chanting crowd, every song received with a rabid enthusiasm that possesses the players, the songs and the audience alike. It's a primal, almost tribal experience, one that via word of mouth has tickets for the band's already sold-out early 2003 shows eliciting eBay bids of more than $300 a pair.

"Touring has always been the most important thing for us," says drummer Adam Carson, who co-founded the band with Havok in the early '90s. "We basically created our fan base by touring non-stop" "I've been touring since I was 19 years old," Havok continues. "We were always of the mind that if two people showed up the first time we played somewhere, we'd go back until there were 10, then 30, then hundreds or thousands. We would keep coming back until they were forced to take notice"

As regaled as their live show has been, however, the members of AFI make it clear that there was no attempt to replicate it on Sing The Sorrow. "That's a big priority for so many other bands," says Jade, "but it's never been a concern for us. If anything, it's the other way around; at least for me, it's about creating the song in the writing and recording process, then hoping it'll translate live, rather than road-testing the new songs, then hoping we can 'capture the live vibe' in the studio" Instead, the band prioritizes making the best and most adventurous record possible time and again, this time with the more-than-able assistance of the aforementioned Finn and Vig (both of whom Jade recalls as "so cool and affable from the very beginning," explaining, "There was never any kind of 'star producer' vibe"). "I think the progression from The Art Of Drowning to the new record is similar to the leap between Shut Your Mouth and Black Sails," says Havok. "People familiar with our previous records are going to notice a marked growth. The songs are far more complex, the performances are superior, there are some ambient and electronic elements, which we've never done before, and vocally, I pushed myself to extremes I'd never achieved before, both in terms of aggression and melancholy"

"Everybody says, 'This is our best record yet!' every time they come out with something new," Jade concludes. "I know it's a total cliché, but in our case, we're always pleased with our latest record because each one is different from the previous one. The fact is, this time we had more time and put more effort into writing and recording and I believe that really translates" 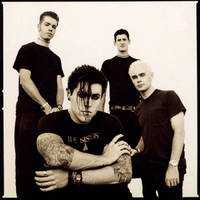