"That is not dead which can eternal lie,
and with strange aeons even death may die."

The metal band AEON was conceived in 1989 under the initiative of Dario Kroznjak and Alexandar Puzar under the original name of DISSECTION. Dissection was basically covering songs by well-known extreme metal bands at the time. Several musicians were part of Dissection until two guitar players, Sasa Ristic and Paolo Gavocanov were added. Dissection began to experiment with a heavy deathmetal sound in their originals, which evolved into the progressive technical metal they now play. This lineup remained until the summer 1993, when Sasa left for military service and then left the band altogether. In winter of 1993-1994, Siniša Bival became a part of the group and the name changed to AEON. AEON is now a compact group and consists of Dario Kroznjak (vocals/bass), Paolo Gavocanov (guitar), Sinisa Bival (keyboards) and Alexandar Puzar (drums).

AEON has performed in concerts all around Croatia and has released two demos. The first demo was recorded in Jan '93 (still under the moniker Dissection) and second recorded in winter 1993-1994 under new name and lineup change. The second demo achieved several incredible reviews in 'zines around the world and Chronicles Of Chaos e-zine.

In early '96 the band has re-released the second demo under the title Clean Hand Of Eternal Gods with two bonus live tracks, and recorded a 9 track promo tape titled Ephemeral for an eventual CD release. Both releases already achieved very good reviews on the Internet such as in the Chaotik Web Zine.

AEON will be glad to hear from you! 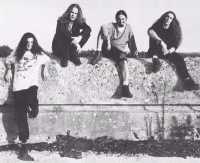