Let’s be honest: Texas is kind of a snooze these days. Steve Nash doesn’t whip his rock locks around Dallas any more, not even an extended Pee-Wee tap dance could’ve saved The Alamo, and South by Southwest isn’t exactly going all out to discover the next Slayer. That said, Texas is a source of immeasurable pride for those who were born and bred there, including the young shredders of A Dozen Furies. Guitarist Marc Serrano can’t really explain it—in fact, he almost blasphemously cops to preferring the architecture and historical sweep of the northeast—but he sure as hell knows how to embrace it.

“For Ozzfest this summer, we’re going to buy these lawn chairs at Wal-Mart with the Texas flag on them,” he enthuses. “We’re gonna get everything Texas. We’re gonna fly the Texas flag outside our RV every day, man. It’s gonna be fun. Everyone’s gonna know we’re a bunch of redneck fucks.”

Yes, you read that right: The quirky bastards are hauling an RV along for their coming-out party on the biggest metal tour in the world this summer, but that’s an anecdote for another paragraph. For now, don’t misinterpret Serrano’s good ole boy glee. It’s not like A Dozen Furies spend their free time accruing Confederate Army memorabilia and shootin’ bbs at stray cats from the back of their pickups. Ever since junior high, they’ve been busting ass hopping from band to band in their incestuous Dallas sub-scene, one of which, Ethynol, housed all five Furies at one time or another. After splitting from his last band Serrano found himself back at square one, hanging out at home, twiddling his thumbs, and waiting for his next chance to bring the noise. Unsurprisingly, he got back in touch with old buddies and collaborators Joey Turner and Mike Miller; they started writing songs with just two guitars and drums, which, while kicking substantially more ass than prior youthful efforts, lacked the must-have ingredients of bass and vocals.

Luckily, they just happened to be jamming in multi-instrumentalist friend Keith Reber’s home studio (Reber: “Dudes, you know, I can play bass… fuck it, I’ll play bass.”), and they just happened to know one of the most versatile, off-the-chain frontmen in town, Bucky Garrett. His melodic Mike Patton croon often careens without warning into a blistering death howl, supplying an edge that more than matches the compositional schizophrenia on ADF’s debut full-length A Concept From Fire, an explosive collection of propulsive metalcore harmonies, visceral death-derived change-ups, and memorable, gripping hooks that refuse to pander.

“I like being unpredictable,” Garrett says, and he’s not just talking about switching up vocal styles. “Now I can let all the frustrations and emotions right out.” “He can do anything that needs to be done,” Serrano marvels. “There’s really no argument there.”

Just don’t get on Garrett’s bad side. One of the greatest appeals of being a metalhead is locking into a vocalist’s rabid, vitriolic fervor. So while exuberant young fans have cottoned to the carpe diem ferocity of ADF tracks both old (“Lost In A Fantasy”) and new (“Awake and Lifeless”), they should consider themselves lucky that their relationship with the frontman is strictly platonic. Garrett has been burnt, often, and he’s not afraid to turn the flamethrower back the other way.

“There’s definitely a lot of pain and a lot of struggle in the lyrics,” he reveals. “Maybe a little revenge, some love-hate and betrayal. It’s fun to put it right back in somebody’s face. If one of my lyrics pertains to someone that’s out there I’ll give them some kind of look and let them know.”

This you should expect; the name of the band ain’t A Dozen Furries, for god’s sake. And there’s absolutely nothing cuddly about their kitchen sink-core songwriting process, which clearly stems from their disparate personalities. Turner is the metal god, unkempt and grungy, vowing not to shave his beard until Ozzfest 2005 ends. Drummer Miller is not only the resident mythology buff (go ahead and Google “furies”), but the graphic, web and merch designer at constant risk of overexertion. Reber is the encyclopedic pop aficionado who tries to rein Miller and Turner towards structures that are “a little more pleasurable to the ears.” A Concept From Fire, fittingly, was born a hydra-headed pugnacious wild child, one that will please screamo kids, techheads, and old school heshers alike.
Care to grill the lads about those titular Greek daughters of the night, their struggle to stop overlaying vocal and guitar melodies (as aforementioned, you don’t want to step on Garrett’s toes), or what they’ll play and not play from debut EP Rip The Stars Down? You can accomplish all of this and more any night on tour, because the boys aren’t interested in a “hit and run” approach; they just want to bro down with the kids. From the minute ADF get off stage to the minute the venue’s empty, they’ll man their own merch booth and talk rock with fans, because they know from experience how much cooler it is buying a t-shirt from the still-sweating guitarist than some indifferent lackey.

“We approach things and attack things in the most reasonable fashion,” Serrano shrugs, on break from guitar tracking in their Dallas studio. “You know, a lot of bands just come out and spend a ton of money and waste a ton of money, get a bus, get all this shit just because they signed a big record deal. We still have a van—we’re buying an RV for Ozzfest. We wanna be doing this for the next 10 years. We don’t wanna blow our load on one CD and have it fail because we wasted all our money on a big recording budget and a big tour bus, and there’s no money to put us in the kids’ eyes where they can hear us and see what we’re all about.”

“Everyone’s gonna have their eye on us,” he continues. “Everybody wants to see if what we put out is real or not. We have to come out and kick everyone in the face. We have to have a great-sounding record and we have to have it be really representative of what we are. People are gonna be really hard on us, I think, so it’s gotta be even that much better.”

Suddenly, his monologue is interrupted by an obnoxious squall of jazz. Serrano turns around to find his other four bandmates gathered behind a window in the background, pointing at him and cackling.

Pressure? What pressure? A Dozen Furies are here to slay. 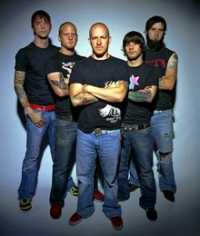