More so than any other music since the blues, hip-hop is all about stories. And its stories are both criminal minded and grand, making them enthralling and unbelievable, but also making them only as interesting and convincing as the teller. That's why, despite being blackballed by the industry, without a major-label recording contract, heads still gravitated to Jamaica, Queens' realest son, 50 Cent, like the planets to the sun. 50 Cent, born Curtis Jackson 26 years ago, is the real deal, the genuine article. He's a man of the streets, intimately familiar with its codes and its violence, but still, 50, an incredibly intelligent and deliberate man, holds himself with a regal air as if above the pettiness which surrounds him. Couple his true-life hardship with his knack for addictive, syrupy hooks, it's clear that 50 has exactly what it takes to ride down the road to riches and diamond rings. 50 is real, so he does real things.

Born into a notorious Queens drug dynasty during the late '70s, 50 Cent lost those closest to him at an early age. Raised without a father, 50's mother, whose name carried weight in the street (hint, hint, dummies), was found dead under mysterious circumstances before he could hit his teens. The orphaned youth was taken in by his grandparents, who provided for 50. But his desire for things would drive him to the block. Which in his case was the infamous New York Avenue, now known as Guy R. Brewer Blvd. There, 50 stepped up to get his rep up, amassing a small fortune and a lengthy rap sheet. But the birth of his son put things in perspective for the post adolescent, and 50 began to pursue rap seriously. He signed with JMJ, the label of Run DMC DJ Jam Master Jay and began learning his trade. JMJ would teach the young buck to count bars and structure songs. Unfortunately, caught up in industry limbo, there wasn't much JMJ could do for 50.

Curtis Jackson also known as 50 cent hasent had it easy. he was born in queens 26 years ago.read on and here about his life..........
His drug dealing mother was shot right in front of him.he was an orphaned child.He has been stabbed and put in jail numerous times.in 2000, 50 cent was shot 9 times in front of his grandmothers house and rumours started he went back to selling crack.he has already made a number of songs such as in da club, no mercy no fear,50 cent is the future and tonnes more.
when he gave birth to his son he was more careful about his singing.On the 6th of february 2003 his albulm 'get rich or die trying' was released.he has been blamed for murders too.If anyone else was living this life what would you do? 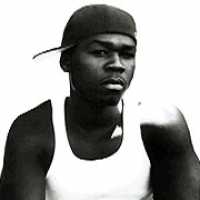