2Gether is a story of the formation of a boy band singing sensations 2Gether, and their loving and lovable manager, Bob Buss.

Bob Buss, whose career was on the rocks, is challenged to put a boy band together in just six days, so that he can show he's still got what it takes. After discovering the talented and hunky Jerry in a parking lot, the two hit the road in search of the remaining four members of this group-to-be.

What follows, as they discover Mickey, their bad boy, QT, their young and vulnerable boy, Chad, their knockout hot and shy boy, and Doug, their older brother-type boy, is a hilarious inside peek into the world of boy band star-making.

That is the story about the making of the boy band 2Gether.

Q.T. has been deceased since last year. He died 8 days after his 16th
birthday. 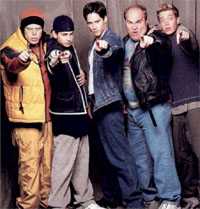